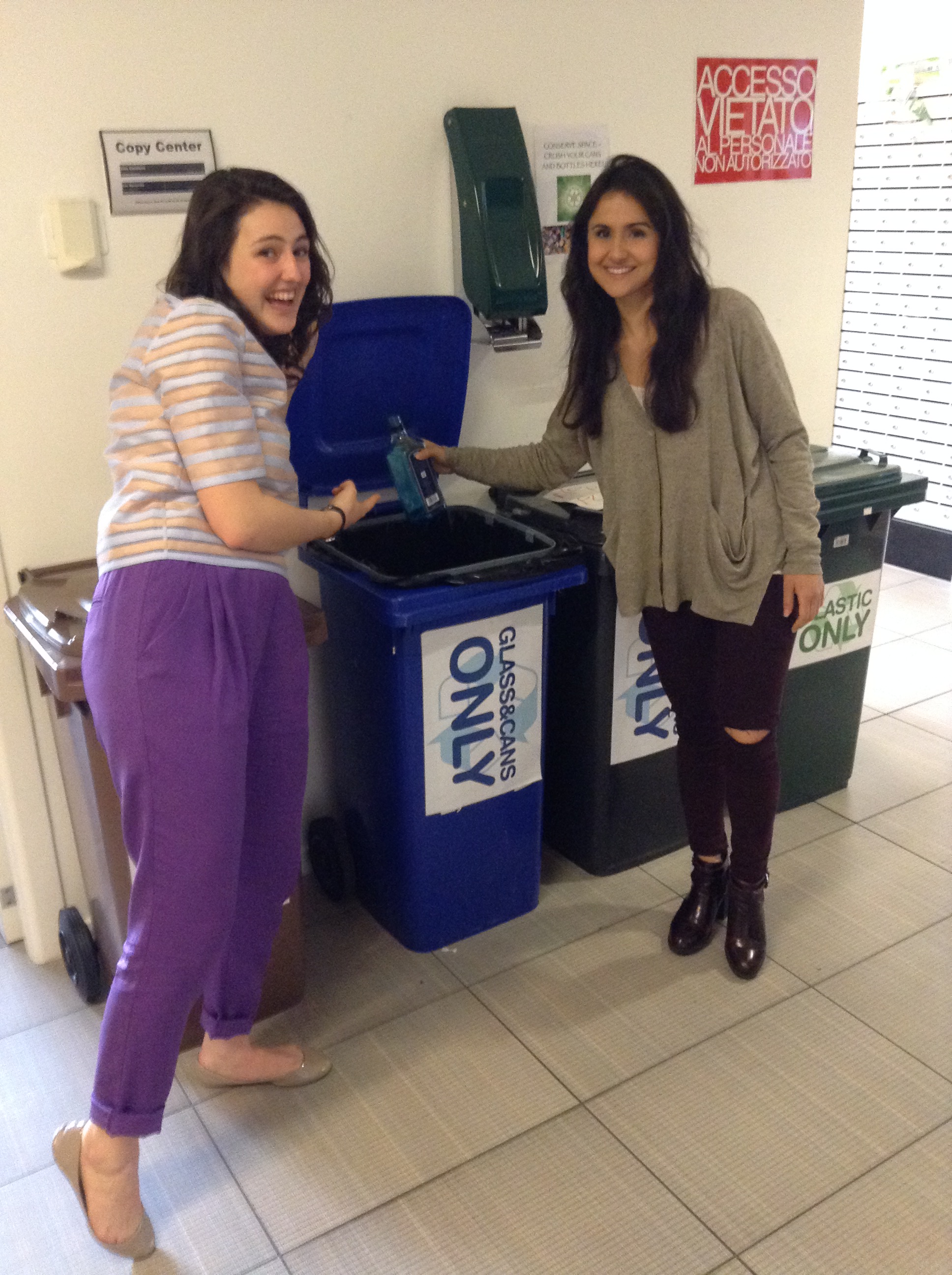 BOLOGNA—As a school with an Energy, Resources and Environment program, it is not surprising that SAIS students are taking the initiative to improve the recycling program at SAIS Europe.

After the administration asked for help in light of potential fines for violations of Italian recycling regulations, first-year ERE student Nicole Ahdiyyih volunteered to organize and coordinate a new approach to improve SAIS Europe’s recycling practices. She sent out a survey in October asking for student feedback and used the results to formulate a new plan with Paolo Forlani, the SAIS staff member in charge of campus recycling. This new plan included removing trash cans from all classrooms, leaving only paper recycling bins. Each floor of the building still has trash cans and bins for other types of recycling, but the idea, Ahdiyyih said, was to encourage people to think about if their waste was recyclable, and not just toss it into the closest bin.

“Our goal is to reduce waste and make sure people are putting things where they should go,” she said. “My idea is that if you have a waste bin in every single room, everyone will throw everything into those and they won’t make a conscious decision to put things in the specific bin where they belong. If you don’t have that bin there, people are forced to walk to the lobby and put it where it’s supposed to be.”

The cleaners now count the number of bags of different types of waste they take out, including plastic, glass, and trash. Ahdiyyih tracks those numbers and posts charts on the SGA bulletin board. Without data from past years, it is hard to make any comparisons yet, but she hopes that by raising student awareness, SAIS can start a long-term trend of reducing trash and increasing recycling volume.

“We thought maybe if we do this, we can advertise it,” she said. “As long as we continue doing this, it should go down. It’s hard to get students to be more mindful, but I think it’s helping. I haven’t heard any complaints (from the cleaners) in a while. Now that there’s an awareness, that it’s more of an issue in people’s minds, that in itself is probably the most important thing. Creating a structure and creating data that shows that we’re keeping track and it matters and we care, I think that’s been the greatest success.”

One of the other changes made after compiling feedback from the student survey was adding bins specifically for all the pizza boxes that would accumulate early every afternoon. “Before, there were pizza boxes just all over the place,” Ahdiyyih said. “People weren’t making the effort to find out even if they can be recycled, but they can and now we have the bins and that’s a huge amount of our waste.”

The effort seems to be working. Ahdiyyih said that she has been told that Via Belmeloro, the street on which SAIS Europe sits, is among the best in Bologna for recycling. “Bologna in general is a recycling-conscious city – it’s more of a green city than the average, I think. There’s a lot of regulations and they’re very strict about it, but they said this has been one of the best performing streets as far as recycling is concerned.”

One student who refers to himself as the “laziest guy on the planet” said he was extremely frustrated with the paper-only bins everywhere. “I initially thought it was just oversight or bad planning on the part of the administration. It annoys me but I have to say, this has forced to be more conscientious about my trash. I look at this program with respect,” he said while looking for the closest plastic-only bin.

The next step is to keep the ball rolling next year, with a new class coming into Bologna. With that goal in mind, Ahdiyyih plans to work with Forlani to get next year’s students to continue the project.

“I’m hoping to reach out to someone either who’s in ERE or who has an interest in recycling. I’ll work with [Forlani] and ERE in general to find another person next year to continue doing this.”