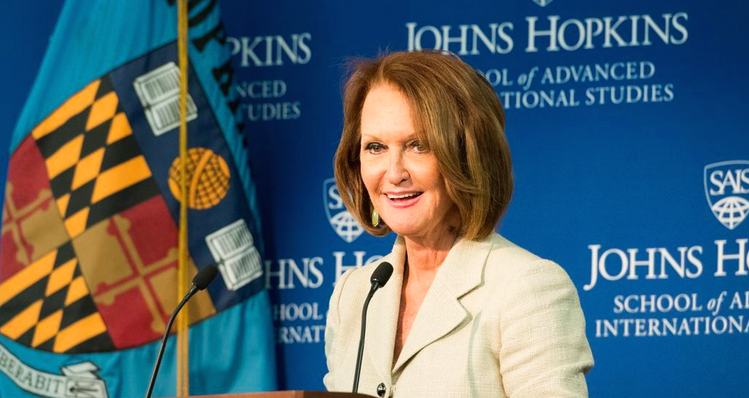 By RUI ZHONG and JAMEEL KHAN

WASHINGTON—On Friday, April 3, the student-run SAIS Global Women in Leadership (GWL) career club held its third annual GWL Conference, this year revolving around the theme “Women Entrepreneurs on the Rise,” which aims to bring together students and leading women professionals for a day of education, networking, and learning. The conference hosted more than 300 attendees and had panels of professionals with diverse experiences.

After an introduction by SAIS Dean Vali Nasr, Vicki Escarra, Global CEO of Opportunity International, delivered the first keynote to lead off the conference. She emphasized development and breaking “paradigms of age, sector and gender.”

When asked what insight she would give to SAIS students entering the private sector, which includes 49% of recent graduates, Escarra shared thoughts on approaching projects and mentorship: “Be flexible. Be resilient. Take on jobs that will push your thinking. Take on special assignments.” She also encouraged more organic and informal mentorship relationships, advising students to “find a leader that is someone you would like to have a beer with, a cup of coffee [with], to play golf or tennis with. I’ve mentored a lot of people in my career and all of them are friends.”

Escarra described one of her proudest accomplishments at Opportunity International as “changing [its] governance structure” to increase organizational efficiency, which was accomplished by advising from Boston Consulting Group.

The morning’s panelists discussed support networks and challenges for women entrepreneurs of differing economic and cultural backgrounds. Julianna Lindsey of Women for Women International found that for one abuse survivor, “the X factor was not financial capital, but the network of other women and the confidence she gained from learning about her rights.” Natalie Madeira Cofield of the Austin Black Chamber of Commerce recognized the challenges of networking. “Your network is your net worth,” she said. She advised student attendees to make impressions and initiate conversations. Panelists also brought up non-economic challenges including the cultural challenges that women face working with international clients. Cofield addressed the challenges of overt sexism she encountered while working with Nigerian clients, discussing a situation where clients would not refer to her by name. Eventually, another woman in the meeting abruptly interrupted the conversation and asserted that Cofield was owed credit for her leadership at the event. Afterwards, everyone began addressing Cofield by her name.

The second keynote of the morning was from Fenugreen founder and inventor Kavita Shukla, who showcased her FreshPaper invention, a paper that slows food and produce spoilage. Shukla spoke extensively on the process of launching her invention, as well as the process of her company’s first run of products as a supplier to Whole Foods. Shukla credited her grandmother’s home remedy as well as the encouragement and support of teachers and individuals in her network, which she built while selling FreshPaper at farmer’s markets in its early stages. Shukla believes the creativity behind invention and entrepreneurship remains integral to how children and adults learn. “As kids, we are all full of creativity and ideas. We are all inventors. But somewhere along the way it is taught out of us and that idea is lost. One thing that has really surprised me is that everywhere I have gone, women of all ages and backgrounds and different professions and ideas have shared their secret inventions with me.”

SAIS students found new perspectives from the insights panelists and speakers provided. “I thought that the keynote speech from Kavita Shukla was really motivational,” said Matthew Florian, a China Studies MA candidate. He found that her perspectives on challenges and obstacles “set a good example about growing her business.”

Divya Kapoor, a SAIS MIPP candidate, also spoke well of  Shukla’s encouragement to attendees to “[believe] in the power of your own idea and [to have] the conviction to push through with it.“

Alida Uwera, an MA candidate in International Development, learned about “womens’ assets and challenges” in the morning panel discussions and about “finding opportunities to network” as panelists shared their own experiences and perspectives.

The second panel of the conference, titled “Mindsets,” tackled challenging gender and career questions. Meena Krishnan of Innoventures, LLC described her goals as “leaving a legacy” in memory of family members lost in a tragic accident, finding that “taking baby steps to grow further” was an important process in her career growth. While panelists discussed their career trajectories, they also touched upon larger issues and values. Monika Samtani, a former news anchor and founder of Ms. Media, cited the September 11 attacks as a turning point that changed her perspective on her career. “I loved my job but also needed to reflect at that time about who we are, where we are, what we are doing,” said Samtani. “What I do with Ms. Media is help people tell their story, [using] what I’ve learned about how to present yourself and giving back by running [this] business.”

The topics of mentorship and relationships had panelists recalling challenges they had faced and tactics they used to overcome them. Marie Fishpaw of Bloomberg Government reflected on her experience working as a White House staffer, encouraging attendees to “ask for hard feedback from people you respect and listen to them often, especially when you don’t want to hear it.”

“Don’t assume things will be handed to you,” Fishpaw added, encouraging attendees to challenge themselves in order to grow within careers. “[Ask] your boss for more work, [pitch] ideas, be willing to do two jobs before you ask for a title that goes with the role.”

The third panel of the conference, which focused on case studies, examined the impact of empowering women entrepreneurs in different sectors. Panelists emphasized the importance of getting economic security and resources to women in developing countries. Patience Marime-Bell of Mara Ad-Venture Investments worked on “educating people about rights to shelter, food, and clean water, but didn’t know how to get them these rights.” She concluded that “economic empowerment and economic security were ways to attain these rights.” Neha Misra of Solar Sister discussed the importance of electricity in lighting, cooking, and other day-to-day tasks and argued that these necessities were essential to women’s empowerment in developing regions. “Electricity [means] so much to the women I’ve worked with,” said Misra.

As the conference closed and moved towards the evening reception at the New Zealand Embassy, GWL co-president Caroline Smeallie reflected briefly on planning for the event. When asked about the organizational process behind the conference, Smeallie discussed the diversity of perspectives on the topic as well as SAIS’ role in developments in entrepreneurship.“We decided this was an important theme because it touched upon so many different issues related to gender and development: economic issues, social issues, policy implications — just the number of sectors involved in entrepreneurship. It was a topic that had enough breadth that everyone could find something interesting. The number of women entrepreneurs is on the rise and we at SAIS want to be a part of this conversation.”

GWL’s planning began after the 2014 conference one year ago. Smeallie explained that after selecting the theme, a 25-member student board formed in the fall of 2014 and “worked incrementally” to plan the panels and keynotes; she added that the planning process emphasizes the conference as a “student-led and a collaborative process.”

Smeallie and fellow co-president Seethal Kumar concluded with a few thoughts on themes from this year and takeaways for future conferences. “My favorite thing about this conference was having real dialogue and discussions, so if there’s more opportunity next year to build structure around Q&A and allow more voices to be heard, that’s a really important part of the conference,” Smeallie said. “Any way that can be elevated for next year would be great.”

“One of the themes I will take away from this conference is that entrepreneurship can happen in big and small ways — spearheading a new initiative within your current company and starting a new group at SAIS are also examples of affecting change through one’s leadership and vision,” Kumar said. “The key that was reiterated by many speakers today was that you must believe in yourself to make your dream a reality.”

Previous post The Political Implications of “Under the Dome” in China