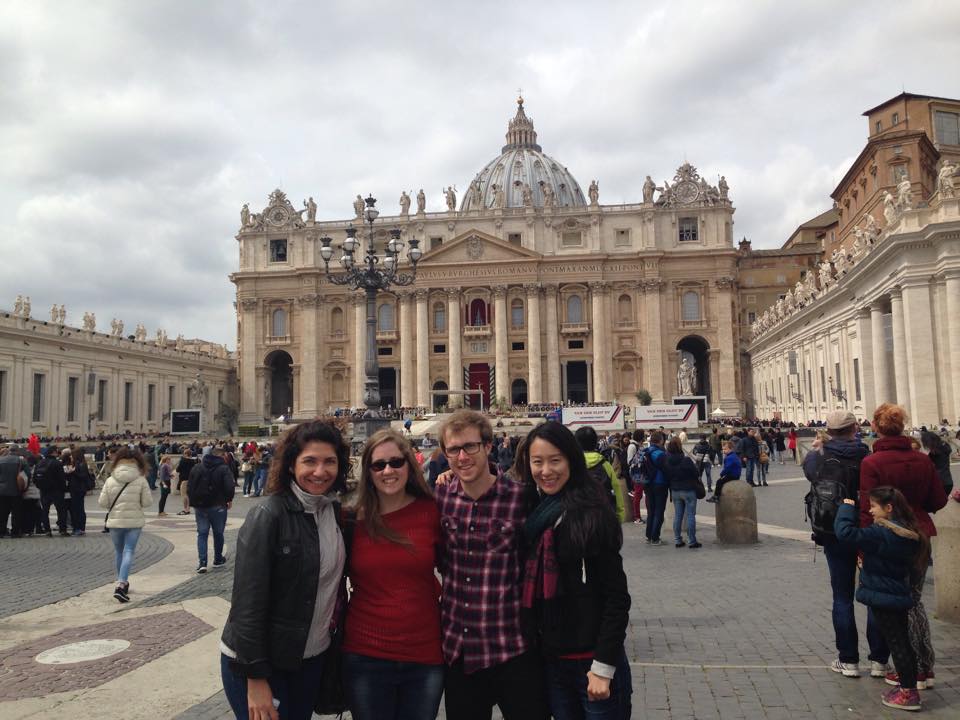 BOLOGNA – There are many advantages to spending a year studying in Bologna. While the academics are top-notch at all three SAIS campuses, Bologna provides access to travel opportunities that are unfeasible from either Washington, D.C. or Nanjing. Celebrating Easter Mass with the Pope in St. Peter’s Square is one such experience.

“You don’t have the opportunity to go to Easter Mass (in Rome) that often, and being in Bologna really made it easy,” SAIS Europe student Kevin Matthees said. “It’s making use of your time in Bologna. Not too many people can say they’ve seen the Pope in person before.”

Twelve SAIS Europe students made the two-hour pilgrimage south from Bologna Easter weekend. More students had originally expressed interest back in October, when the planning process started, but many who did not buy their train tickets and book their accommodations far in advance found themselves priced out of the trip.

“Within a month of Easter Sunday, every (train) ticket was at a minimum 56 euros and places (to stay) ran out very quickly, especially for Easter in Rome,” said Stephanie Billingham, another SAIS Europe student. “We joked that it was an Easter miracle because my group booked a place about a seven minute walk from the Vatican.”

Everyone who went to Rome was able to attend the mass. Tickets are free, but groups larger than six need a letter from a priest to get tickets. Matthees asked his priest in Bologna to write one and a day after sending the letter to the Vatican, he got confirmation that the application had been approved.

The tickets just gave access to St. Peter’s Square, but not necessarily a seat. The square opened at 7:30 a.m., but in order to beat most of the crowds, many of the students got in line well before then.

As they were standing in line, the rain started to pour. While not quite a flood of Biblical proportions, it was enough to make everyone pretty miserable. “(The rain) did a great deal to lower the numbers in St Peter’s Square, as well,” Billingham said. “It was not nearly as crowded as we’d expected.”

The reduced crowds actually enabled many of the students to get seats about 100 meters from the altar and not have to join the standing-room only crowd behind. Unfortunately, the early arrival also meant they had another two hours to wait in the driving rain before mass started.

“It was two of the most miserable hours I’ve spent in my entire life,” Billingham said. “We were freezing because it was windy, it was bucketing down – I’m from the Pacific Northwest, so I know rain, and this was really terrible rain. We were a miserable bunch.”

A few were unable to survive the wait and left early, but those who were able to stick it out were rewarded with a memorable experience, even if everyone had to stand on their chairs to see over (or between) the people and umbrellas in front of them.

The rain stopped early on during the mass – another Easter miracle – just as the Pope was getting ready to step up to the altar.

After the mass – given in Latin and Italian – was over, Pope Francis drove through the square in his Popemobile, passing within about five meters of the group, Matthees said. That was the highlight for many.

“People were pretty subdued because of the rain,” Billingham said, “but as soon as he came out into the open and was going through the crowds, people were just crying out “Il Papa!” and “Viva Francesco!” It was so cool.”

Over all, those who stuck it out were very happy they had. “After all the hardship, it was enjoyable at the end,” said Jorge Ayache, another student.

The experience was a good complement to much of what people study at SAIS. “We’ve learned so much about religion in the context of war and violence and terrorism and hatred of other people,” Billingham said, “This was such a positive experience, what we’re supposed to think of religion as. That was the best part.”