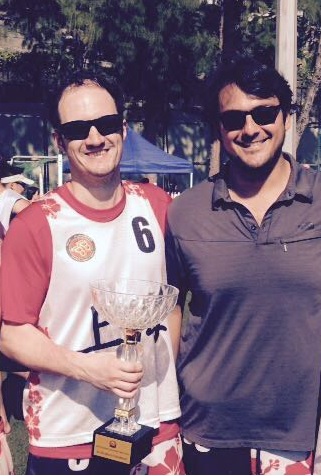 NANJING — Their path to the field was very different. One was part of the first middle school team in his state, captain at his high school, and he played in college. The other met someone through a mutual friend who talked him into playing after finishing school. While different roads led them to the field, they are both 2009 Hopkins-Nanjing Center Certificate graduates who now live, work, and play lacrosse in Shanghai, China.

Zach is from your “typical” lacrosse background: born on the East coast, started playing in his youth and continued playing at Colby College.

Growing up in Brunswick, Maine, Goodnough had heard stories from his uncle — who spent time in Taiwan as a Fulbright scholar in the 1970s — about life abroad. This influenced Goodnough to start taking Mandarin classes during college. An East Asian studies major with a double minor in Math and Physics, he spent six months during his junior year studying abroad in Beijing in an intensive language learning program.

It was through this program that Goodnough learned about the HNC and decided to apply. “It seemed like a great stepping stone to work in China,” Goodnough said. “It would provide a great network, improve my Chinese, and I could get to know people with similar interests.” After spending a year in Nanjing, Goodnough landed a job with Baseline Technical Services, an engineering consulting company where he runs the sustainable development program for a chain of hypermarkets. His responsibilities include green building certification, implementing maintenance management systems, helping companies put together a corporate social responsibility program and retrofitting current systems to become more sustainable.

On the Center’s role in helping find a job in China, Goodnough said, “It got me into China and I did an internship with them during the winter which led to a full-time position. It was mostly reputational. They knew if I could operate in that kind of academic environment, then I could handle working in a bilingual, multi-cultural company.”

Alamdari is not so typical: from Los Angeles, California, he did not pick up a stick until he completed his time at the HNC.

A 2006 graduate of the University of Southern California, Alamdari started taking Mandarin classes his sophomore year because he was looking for a challenge. “China was on the rise and I wanted to get out to China and learn more about the culture, it was just so different from everything else,” he said.

Alamdari spent a semester in Beijing in 2005, which was “a totally different experience from Los Angeles. There is a lot of commerce between the United States and China and I just wanted to get involved somehow,” he said. With this in mind, Alamdari did an internship with the U.S.-China Business Conference in Beijing for three months after graduating before going back to the United States.

After hearing about the HNC through a former Chinese professor, Alamdari went to check out a recruiting event and decided to apply. “It was a great way to get back to China. They really sold me on the alumni network and the job opportunities afterwards,” he said. Unfortunately, Goodnough and Alamdari graduated during the peak of the financial crisis, which they said affected their prospects after graduation.

“In a way, it helped our class bond. Not only were we struggling through classes in Chinese but also nobody was getting hired. This was the height of the recession. It was really tough,” Goodnough said. “We were also getting used to a Chinese roommate, living in a different country, and the additional frustration of not being able to find a job made our class really tight.”

Upon graduation, Alamdari got a job with a company that did due diligence and tried to get a clearer picture of how companies worked. Alamdari said that because China has nothing like the IRS or FBI, his company performed a similar role for foreign investors who wanted to know more information about the companies in which they were looking to invest. Unfortunately, this got the company into some trouble and the CEO is currently in a Chinese prison.

“I got out of it because I did not like policing people,” Alamdari said. “I studied psychology and I am really interested in Chinese consumer behavior and buying patterns, especially in the food and beverage industry,” he said. After working for a coffee company for two years, he is currently between Shanghai and Shenzhen looking into setting up his own company.

When reflecting on their time at the HNC, they agreed it was the people they met that was the best part of their experience. Alamdari said, “They are friends for life.” Goodnough added, “the fact that this is one of the only places in the world where bilingual students who want to work in China can come together, it is a really unique place.”

One thought on “HNC Lax Bros in China”