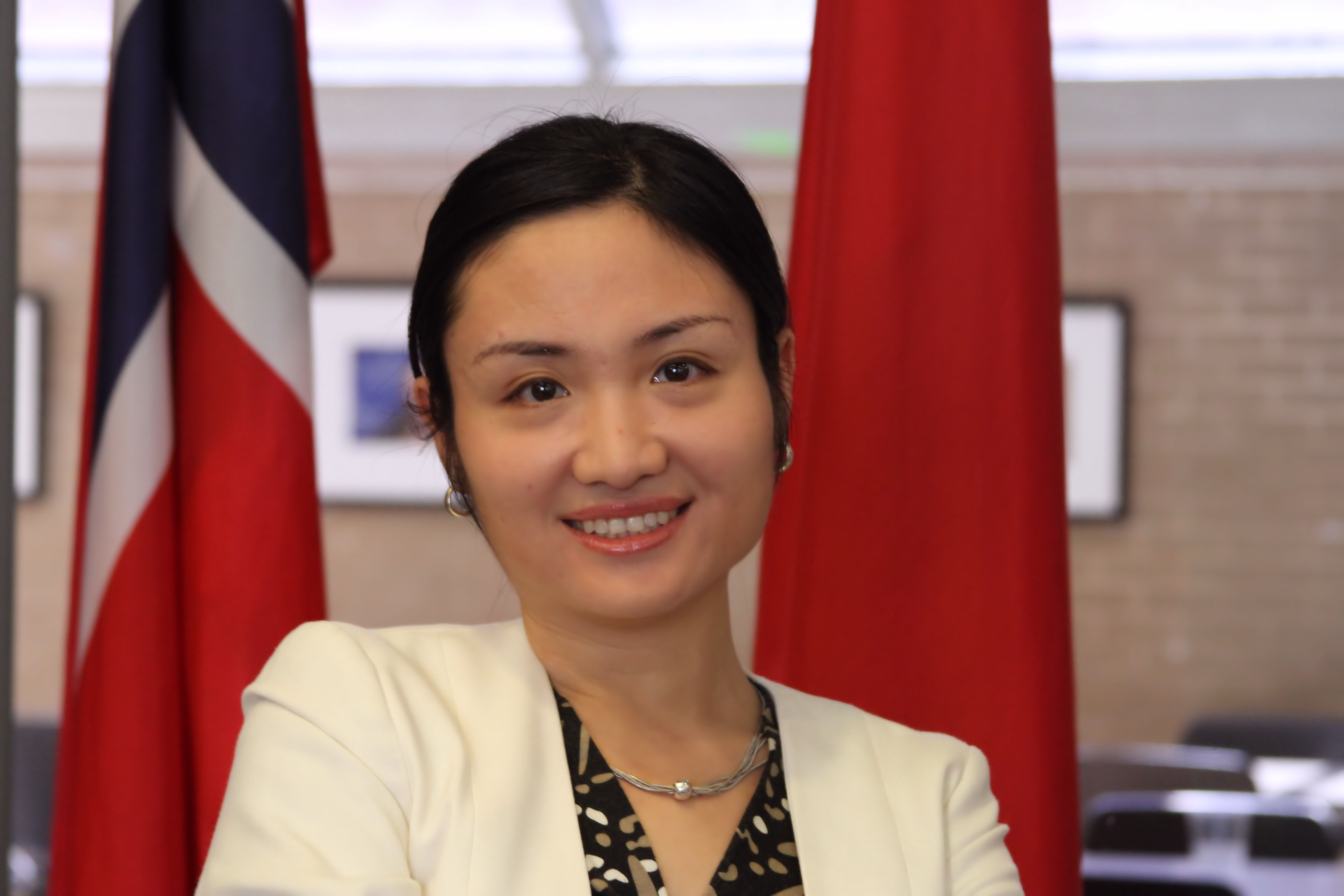 Dr. Ling Chen is an assistant professor in the International Political Economy program at SAIS. Dr. Chen holds a PhD in political science from Johns Hopkins University, where she wrote her dissertation on the varieties of local state capitalism in China after economic reform. Prior to joining the SAIS faculty in 2015, Dr. Chen was a Shorenstein Postdoctoral Fellow at Stanford University, and Rajawali Fellow at the Ash Center of Harvard Kennedy School. Dr. Chen’s research interests lie in the comparative political economies of East Asia and in the role of political institutions in shaping economic policy and development.

Could you tell me a little about your background? What first sparked your interest in China’s political economy?

I grew up in China where I completed my BA at Peking University. I then did my MA degree in Toronto and finally my PhD at the political science department at Johns Hopkins University. During my senior year at Peking Universty, I met several U.S.-trained professors who brought interesting nuance to their academic research. I felt my undergraduate study by comparison was too focused on rote memorization, and I was impressed by these professors’ ability to synthesize different fields of social science (politics, economics) into their own analysis and train students to have independent critical-thinking skills. This is what sparked my interest in state-market relations, and political economy more generally. Being from the Asia-Pacific region, I was especially interested in the political economy of Asia.

What kinds of classes are you teaching this semester at SAIS? What about next semester? How do those classes fit into SAIS’ academic mission?

This semester, I’m teaching “China’s Political Economy in Transition,” and in the spring, I will teach “Political Economy and Development Strategies in East Asia.” As for how these courses fit into the SAIS curriculum, let’s start with the China program. While I am officially in the International Political Economy IPE department, my courses are cross-listed with China and Asian Studies, and my spring semester course will be cross-listed with International Development as well. I think my courses offer a nice bridge between those who focus purely on politics and those who focus purely on economics. I am a political scientist by training, and I focus on how different factions and actors shape economic policy-making. In terms of approach, I believe this integration of investigations into China’s politics and economics equip students with a more nuanced perspective on China, and an understanding of political economy more generally.

My upcoming spring semester course takes a bit of a wider view, making comparative analyses of the political economies of Asia. The course will bolster regional studies students’ expertise on their region, but I also hope to train students in the kinds of analytic methods that scholars of political economy typically use.

I try not to lecture too much in my classes, and push students to offer their reactions to close readings of assignments. Thankfully, my students here at SAIS are quite diligent and always come prepared to have these kinds of discussions. It’s an inspiring academic community here.

You mentioned that you try to foster discussion in class and let students offer their own analysis. What does a typical writing assignment for your class look like?

The assignments let students examine policy implications, but these aren’t the policy memo-type papers students may write in other courses. I’ll ask questions like: “Do you agree with the following statement: China’s decentralization has made major contributions to the introduction of market reforms and therefore the country’s economic development. Why or why not?” In my view, this is actually a controversial topic, and navigating an answer may not be as obvious as it seems. Another prompt may assert that people normally think of the post-Mao era as one characterized by the decline of state-owned enterprises and the rise of the private enterprises. Do you agree with this? It may not be that SOEs withered in the reform era. State capitalism was arguably strengthened instead, whereas private entrepreneurs’ political influences are still limited. I welcome students to write whatever they think.

Moving away from your curriculum at SAIS, I have some questions about your research. Many people wonder how it is that China is able to reconcile its authoritarian governance with increasingly capitalist market structures. How would you characterize this reconciliation?

Great question. This is one of the biggest paradoxes of China’s reform period. The state wanted to increase the number of market mechanisms and capitalist practices, but in a way that maintains the Party’s firm grip on control. Many academics are continually engaged with this question.

The state has been quite selective. In some of the most important, top-tier industries (energy, in particular, high speed rail, aerospace, and telecom) the state wanted and continues to maintain tight control. In Chinese they call it “grasping the large and letting go of the small.” In doing so, the state liberalized “smaller” or less important industries, like textiles, while maintaining decisive control over key sectors. The IT and electronics industries are somewhere in the middle. There are some industrial policies in place (such as in the electronics and IT sectors) that try to encourage innovation. In my view, the debate over state control of the economy becomes much more complex when you break it down by sector; some sectors are of great strategic importance, while others are less so. These policies also vary at the local level.

It should be noted that the Chinese leadership is quite adept at separating political dimensions from economic policies. The Party works hard to let the market exclusively liberalize, while still maintaining tight political control. Obviously, this creates a tension between centralized political control and decentralized economic liberalization. Viewed this way, the state in China emerges as resilient, but also growingly flexible.

I’ve read that 64 percent of the 32.2 million party members in China’s urban coastal provinces are SOE employees. This might indicate a close interplay between SOEs and the CPC. What’s your take on it?

I’m not sure if this figure reveals that much about state-market relations. Entrepreneurs from private enterprises as well as SOEs can join the Party, enabling the CPC to co-opt their interests. The fact that the state increasingly welcomes entrepreneurs into its Party does not have to mean that entrepreneurs themselves want to join the Party. Furthermore, if you join the CPC, this doesn’t mean you’re necessarily on board with the party’s communist ideology. People don’t believe in that anymore. It’s more for social capital, if anything. But on the industrial structure side, China is indeed  facing a public versus private ownership debate. The grasping the large and letting go of the small policy will continue on a selective basis.

A new dynamic is that the state recognizes China has historically been a labor-intensive economy. One concern however is that there is not a large enough working population. China is running out of this renkou hongli (人口红利) “demographic bonus.” China recognizes that this labor-intensive economy cannot be sustained, especially as education levels continue to rise. China’s historically cheap, low cost labor advantage is being lost. As a result, China is trying to increase domestic innovation, as outlined in the recent 13th Five Year Plan.

Many Western observers thus believe that this emphasis on indigenous innovation creates a new reason for the CPC to advance protectionist style policies for its SOEs at the expense of its foreign competitors. But the playing field has never been level. Before 2008, foreign enterprises paid income taxes of 15 percent, compared to 33 percent for domestic companies. This was done to attract FDI. China now is trying to re-level this playing field, and redirect preferential policies to its own domestic industries and companies.

The Western view proceeds to assert that this is a massive plan to recreate state capitalism in China. I don’t necessarily agree. Premier Li Keqiang seems to be increasing grassroots innovation via tax exemption for some SMEs and local industry. Western observers sometimes miss the fact that China is making strides in supporting small, local businesses.

Education attainment in China has greatly expanded in the past decade. As you point out, China is moving away from a labor-intensive economy. Many recent college graduates are thus looking for jobs in “knowledge economy” that maybe isn’t fully formed yet. What other difficulties might the party encounter when moving forward with things like increasing domestic consumption, supporting SMEs, etcetera?

I want to take a minute to focus on new policies that support SMEs. Premier Li Keqiang has really emphasized this. I think there is a conflict of goals between the president and the premier. In my opinion, there may be some potential tensions between what President Xi Jinping wants to do politically and what Premier Li Keqiang wants to do economically. China has tightened its controls in many ways, such as the anti-corruption campaign, thereby curbing patron-client and other guanxi (relationship) networks. Because of this increased control and caution, many businessmen want to be more careful. Many SMEs are in the service industry as well, and the anti-corruption campaign may have negatively impacted them.

Are there any other insights you’d like to offer?

International Political Economy is not a singular discipline. SAIS has an IR focus. Understanding the domestic mechanisms of how things work is important for IR students. This bolsters understanding of what goes on in foreign relations.

SAIS is a policy school with a policy focus, but my classes don’t start with pure policy analysis. I help students understand the process that is behind the policies. Who are the key decision makers, what are the key factions, what incentives shape the ambitions of bureaucrats? These are the kinds of questions whose answers I enjoy exploring with my students.