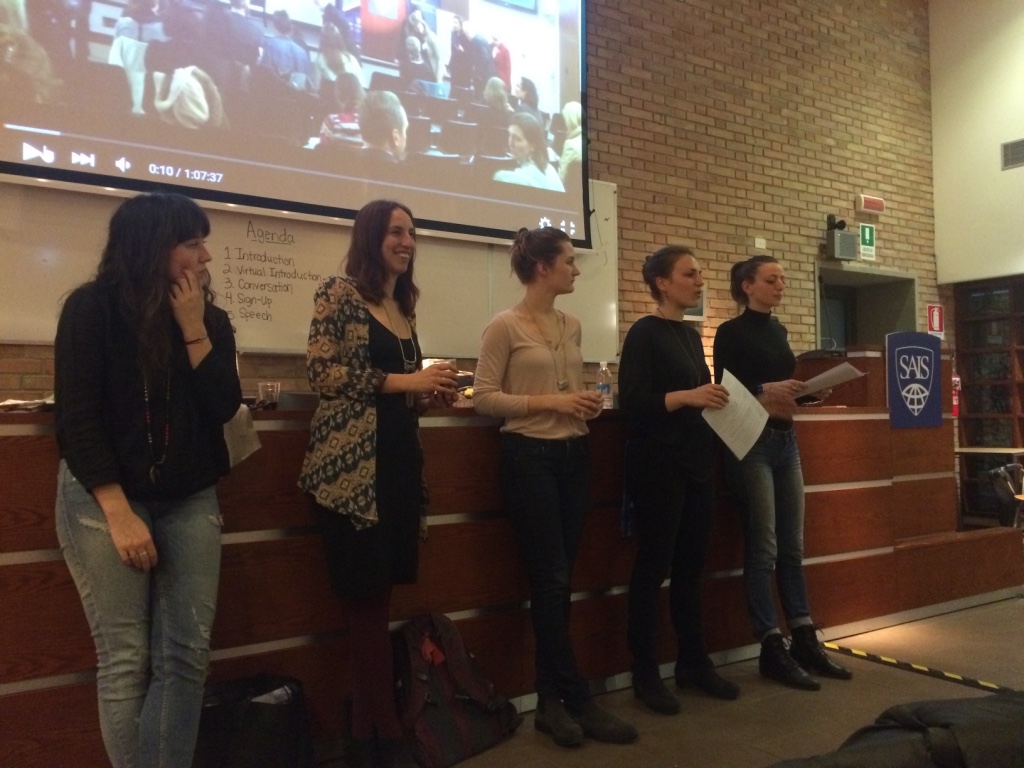 On Feb. 4, SAIS Europe launched its chapter of the SAIS Women’s Leadership Initiative under students Sara Golden, Chelsea Sommer, Natalie Thomure, Caitlin Erskine, and Elisa Bettelli at the Bologna Campus. Around 30 students attended the inaugural event where participants were introduced to the initiative and its goals. The Washington, D.C. campus launch event was live-streamed. The D.C. event included an inspiring keynote address by Ambassador Barbara Barrett and opening speech by Dean Vali Nasr. The event concluded with a brainstorming session regarding future events and activities by the Women’s Leadership Initiative.

As ambitious and as successful as GWL has been, the impediment to the long-term goals of student clubs is that it is dependent on students’ initiative to restart the club every year.  This issue is particularly problematic for the Europe Center as students typically only spend one year in Bologna, which makes keeping the momentum going a difficult feat with a new batch every year. This is what makes the Women’s Leadership Initiative so important. “WLI is a school wide initiative, not just a student club, with the aim of being sustainable over the years, and that is very exciting. We are able to give our time to something that matters and will be here once we’re gone,” remarked Thomure. The launch of this event was driven by the need to make a permanent space, whether it be an organization, a center or curriculum, to discuss the role of women in social, economic and political spheres.

The success of the Initiative in Bologna would depend on its ability to overcome some barriers in the coming months. “In Bologna, our biggest challenge is the time limitation. In D.C., not only would we have two years, but many of us would also stay on to work there and could network and reach out to our contacts, Here (in Bologna) we only have a year and we started in the Spring so we have three months and there are so many things we want to do but we just don’t have the time,” Thomure said.

SAIS Europe has clarity in the goals it wants to achieve to ensure the success of WLI. “We are viewing this as something we are starting this year to pass on to future students and the administration, especially Kathryn Knowles and Jennifer Varney. They are our sponsors and will help in the transition. Chelsea will also be a part of this as an MAIA student — completing her thesis at the Bologna campus — next year and that is essential,” stated Caitlin Erskine.

The Bologna Chapter of the Women’s Leadership Initiative held its first official meeting on Feb. 22 where it spelt out a list of goals it seeks to accomplish by the end of this term. Some of those objectives include starting “coffee talks” for students to interact with successful women in an informal setting; a mentorship program between students and successful women both in the SAIS Women’s Alumni Association network and others; and an annual scholarship for a deserving, female SAIS student. Continuing to build off the first official meeting, the Bologna Chapter will celebrate International Women’s Day with the Bologna Feminist Talking Circle on March 4.

Previous post In Defense of the International Studies Degree