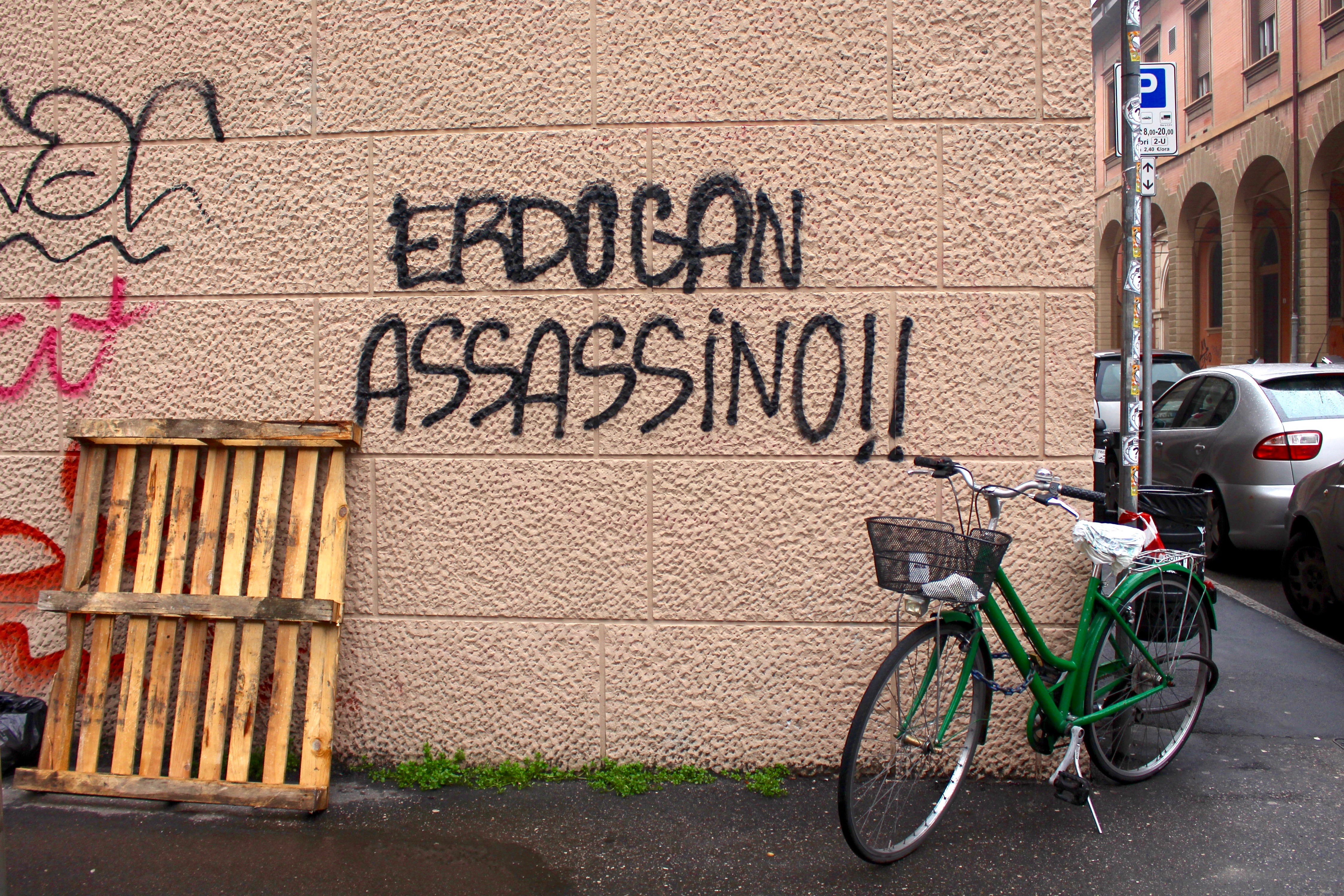 Part of Bologna’s character comes from its street art: Murals and messages of passion can be found on almost any stone wall or garage door around the city. Some would argue that while perhaps excessive, the graffiti conveys the sentiments and attitudes of Bologna’s youth, often reflecting the ideas and movements of the time. Recently, some graffiti tagged on Via Belmeloro, the same street on which SAIS Europe resides, has been aimed at SAIS Europe PhD student Bilal Erdogan, who is the son of Turkish President Recep Tayyip Erdogan, who currently lives and studies in Bologna.

The Erdogan-targeted graffiti first appeared in October 2015, right before the Nov. 1 elections in Turkey, which marked the end of the period of political uncertainty regarding which party would lead the country. When Recep Tayyip’s AKP party lost the majority in the June 7 elections, for the first time in 14 years, a transitional government was put in place, and a period of protests and uncertainty ensued.

Initially 10 percent short of the majority vote after the June 7 election, Erdogan managed to gain the votes needed to maintain office in time for the Nov. 1 polls. Since then, the anti-Erdogan graffiti near SAIS has continued to appear on walls and the sides of University of Bologna buildings, despite efforts by the city to cover them up. Messages written include “Erdogan Assassino,” “Viva YPG,” “Bologna Non Perdona le Stragi di Erdogan,” (translation: Bologna does not forgive the massacres of Erdogan) and “Fuori I Figli di Erdogan da Bologna” (translation: Out with the children of Erdogan in Bologna). Bilal Erdogan is currently under investigation by the Bologna public prosecutor for claims of money laundering, which has fueled the atmosphere of political tension and scrutiny.

In addition to anti-Erdogan messages, there have also been tags of “PKK Libero,” and “Ocalan Libero,” conveying support for the PKK cause. The PKK, which is the Kurdish independence movement in Turkey, appears to be alive and well in Bologna: The group held a rally at the Neptune Fountain in Piazza Maggiore on Feb. 13, according to a poster seen at Piazza Aldrovandi.

While no other graffiti in Bologna appear to have been covered up, multiple tags regarding Erdogan, the PKK and YPG have been visibly concealed multiple times only to be retagged shortly after.

Tunahan Ceylan, an MA candidate from Istanbul says he, “understands the frustration” of seeing the name of a world leader defamed in public. Ceylan believes that this is simply an act of “freedom of expression,” which is an important aspect of Italian society. Initially surprised by the messages, Ceylan does not believe that they pose a legitimate threat and holds no negative perception against the tags. He believes the graffiti is “not something that needs to be taken care of, just [a sign of] freedom.” Another SAIS student noted that while not bothered by the graffiti, it is troubling to see harsh messages containing the specific name of a fellow SAIS student so close to campus.

A student at the University of Bologna Law School, which also has many buildings situated on Via Belmeloro, notes that “graffiti is generally recognized as one of the ways through which a small minority of the student community expresses its views on various issues.” This student does not feel that the graffiti concerning Erdogan is any different from all the other graffiti, but at the same time perceives it as “a rude and somehow unavoidable act by a bunch of extremists.” Another University of Bologna law student reiterated these sentiments, noting that the Erdogan graffiti is no different from other graffiti that covers the walls and buildings of Bologna, but simply wishes that the writers of these messages would find another way to express their views.

SAIS Europe has increased its security of late, requiring all students to wear their ID badges on their body at all times, and requiring any non-SAIS guests to sign in at the front desk. Security at SAIS Europe was already high due to the presence of economics Professor Filippo Taddei, who is the lead economic adviser to the Italy’s Partito Democratico. However, security measures have only increased since the political turmoil in Turkey manifested itself in Via Belmeloro this fall.

Next post Luxury Goods: A Global Outlook for 2016
sgrosve2