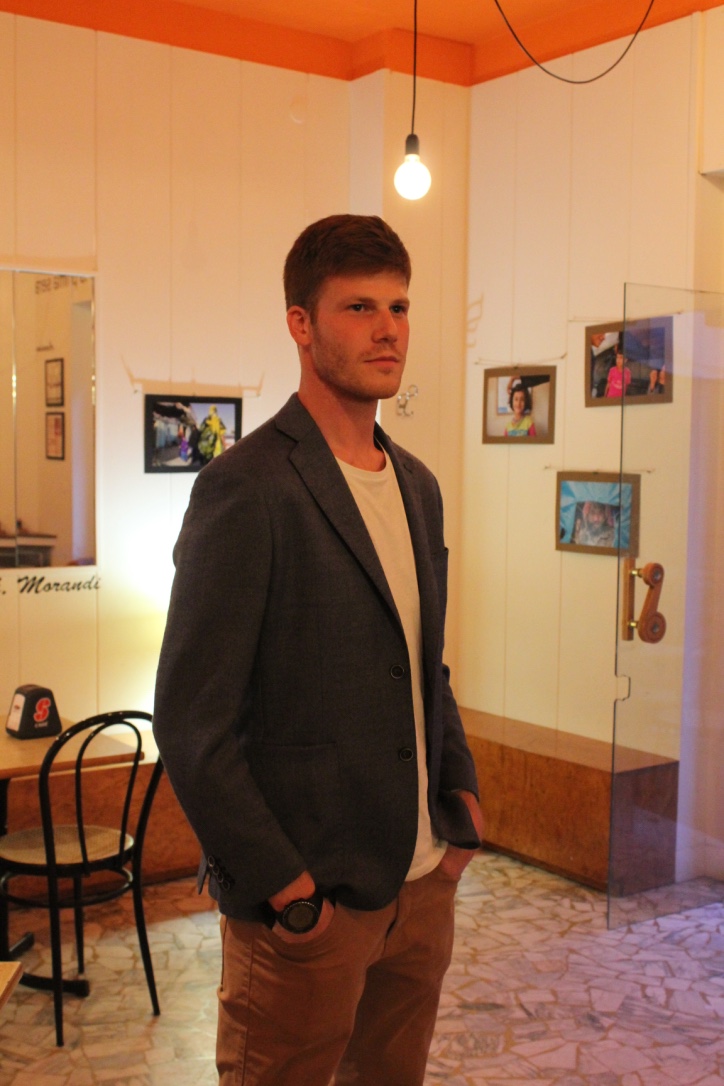 Sitting down with a professional photojournalist was intimidating for an amateur journalist like myself, especially when that professional happened to be someone whose work I greatly admire. I found Jason Spizer in the right corner of the Mizushi Ristorante & Bar leaning back in his chair with two cups of tea waiting for us. As I sat down, he glanced toward the ceiling before reaching for another cup of red tea. After taking a sip, he rested his hands on the table, turned toward me, and patiently waited for me to begin the interview. Spizer, 27, is a tall, auburn-haired guy from New Orleans. Former stock trader-turned-documentary photographer and student living in Italy, Spizer is unequivocally one of the most interesting people I have had the good fortune of meeting. He has traveled extensively working as a freelance photojournalist and has worked on diverse projects focusing on the Yazidi people in Sinjar, Somaliland, Cuba, Ethiopia and more.

For readers unfamiliar with documentary photography, it is a style of photography used to tell a story or chronicle events that are or will be significant to history regardless of scale. “I consider myself a documentary photographer because images can be a tool that ultimately influences long term thinking and policy formation,” says Spizer.

Starting a career is never easy, but it is particularly difficult in fields such as documentary photography. Everyone has a story to tell behind his or her passions, and Spizer just so happens to professionally practice his passion. He says, “Photography is a powerful medium to develop a narrative that might impact the lives of my subjects.”

Constant travel is necessary to be a successful international photographer and breaking into the industry is a difficult feat. Spizer elaborates, “It is critical to make contacts on the ground in the countries where one is working and in the industry. Building trust, and making those around me comfortable enough to open up and share a piece of their lives is ultimately what yields the most powerful and truthful imagery. Ultimately, my success hinges on access and credibility.” Spizer recalls his entry into this career. “I was traveling in Kashmir when I met a guy who was a photojournalist and I travelled and apprenticed under him. I was entering some pretty remote and interesting corners of the world, and he encouraged me to get into documentary photography.” From an outsider’s perspective, it is hard to imagine how one brings a story to fruition. When asked, Spizer replied, “Usually, I get an idea and then I start contacting the people I need to.” When asked about the difficulty of getting people to open up about their stories, especially with people in tense or uncomfortable situations, he said, “You have to have a feel for whom you are talking to and what you can and can’t ask. Usually it takes me a couple of trips before I get a really good story.”

To continue in this line of work, one must be extremely motivated and passionate, which Spizer is. “I pursue these stories because I believe, in general, Western views are shaped by images that show people in the most desperate and extreme circumstances. I want to portray people in a more dignified way and shine a light on human resilience. Also, too often international affairs are covered in a sensationalist manner that is overly simplistic and present people with moral black and whites. Part of my vision is trying to make images that allow people to develop a more nuanced view on a world event.”

Most aspiring young professionals have role models in their respective career fields.  Spizer says there are two important journalists who have either personally mentored and encouraged him or have inspired him from afar. They are Tim Hetherington and Marcus Bleasdale. Hetherington was an investigative photojournalist who published for organizations such as Human Rights Watch and the United Nations. Bleasdale is a documentary photographer who has collaborated with organizations such as National Geographic and Human Rights Watch.

While many of us were enjoying a relaxing spring break, Spizer was making his way through the streets of Somaliland, learning the stories of the people and their community. One man in particular has had a lasting impression on Spizer’s work. “In Somaliland, I met a guy who left during the civil war, moved to Italy and decided to return. He is determined to revive a music and culture scene that thrived in the ’60s and ’70s. Unfortunately he fears economic hardship and outside influence are taking the country in a different direction.”

Recently Spizer’s work has been showcased in a local exhibition at Café Belmeloro, just down the street from SAIS Europe. Throughout the evening, a large gathering of SAIS students walked around the café, gazing at the stories of Somaliland and the Yazidi people captured through the lens of a camera. Students from the University of Bologna and other locals were also in attendance. As guests moved from photo to photo, Spizer entertained them by telling visitors the stories behind each photo.

Previous post What Is Not Being Asked about the Panama Papers?

Next post Eliot Cohen and the Fight Against Trump
sgrosve2