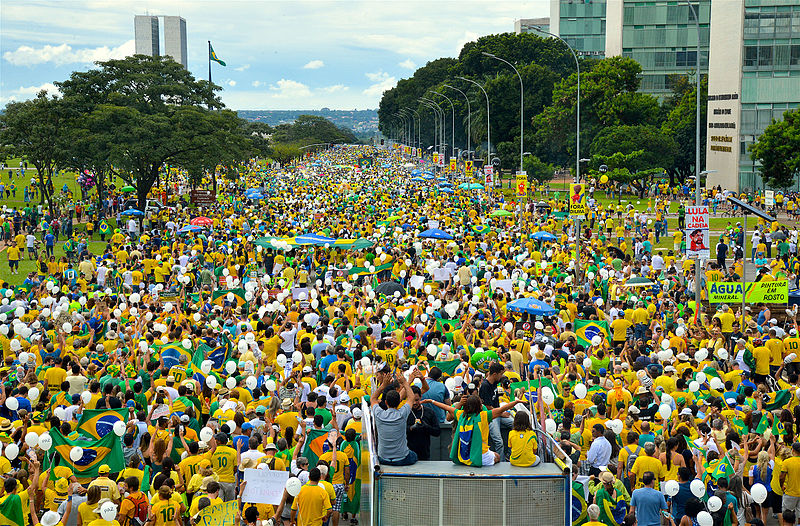 As the biggest economy in Latin America, it was written in the stars that Brazil would come to play a significant role within the global economic order. Recently, however, the Brazilian economy has been facing headwinds, and, equally worrying, corruption has infected the government, reaching the highest echelons of the establishment: the presidency.

What tactful David could have vanquished this Brazilian Goliath? One simple thing: a car wash.

Operation Car Wash (Portuguese: Operação Lava Jato) has exposed the deep-seated corruption present in different quarters of the Brazilian government. Although domestic problems do not normally warrant international attention, Operation Car Wash is definitely the exception to the rule.

Starting as a money laundering investigation headed by the Brazilian Federal Police at the Posto da Torre gas station in 2014, the investigation exposed an illegal kickback scheme between politicians and Petrobras (formally, Petróleo Brasiliero S.A.). By awarding construction contracts at inflated prices, politicians were skimming off 5 percent of contract values for a total of R$2.1 billion (US$545 million, 2015). However, the scandal runs deeper and higher up the chain of command within the Brazilian government. So far the arrests and questionings have included: José Dirceu (former chief of staff for President Lula), Eduardo Cunha (Speaker of the Chamber of Deputies), Edison Labão (former Minister of Mines and Energy), and Luis Claudio Lula da Silva (son of former President Lula). With 84 individuals convicted and 16 companies involved to date, allegations now have reached the top: former President Luiz Inácio Lula da Silva and current President Dilma Rousseff. Currently, a congressional committee has begun meeting to discuss the future of the Brazilian president and the fate of the country. With protests intensifying, corruption investigations growing, and a tumbling economy, Brazil is certainly at a crossroads.

But corruption is not a unique attribute to developing economies, let alone those with large, state-owned industries such as Petrobras.

In fact, among the BRIC (Brazil, Russia, India and China) consortium, Brazil has fared well. According to Transparency International’s CPI Index, Brazil has consistently ranked lower than China, India, and Russia, while tying with India only in their recent 2015 survey. Based on World Bank’s 1994-2014 analysis, Brazil has controlled corruption better than its BRIC counterparts, until it was surpassed by China in 2014. This is to say that while Brazil and the other BRIC countries are not free of corruption, Brazil is the best of a modest bunch.

But at home, corrupt activity is far more prevalent and personal. According to a 2009 World Bank Group survey, 70 percent of Brazilian business-owners believed that corruption was a major setback to doing business within the country. The main inhibitor has been the Brazilian bureaucracy. Although the Congress passed the Clean Company Act in 2013, the law has only exposed the deep-seated nature of corruption across the Brazilian economic landscape. While Operation Car Wash has tested the resilience of the Brazilian legal authority, widespread corruption is unfortunately malignant. At this point, Brazil has no other option but political amputation.

Yet, the implications of Operation Car Wash cannot be solved by the pageantry of the guillotine.

Operation Car Wash has erased the veneer of economic prowess and growth portended by economists. With China, Russia and India, the BRIC consortium represented the future economic powerhouses that could possibly reorient the economic locus in the global system. With abundant natural resources and energy reserves, Brazil’s growth signaled the rising prominence of South America and Latin America. More importantly, as the hosts of the 2014 FIFA World Cup and upcoming 2016 Summer Olympics, Brazil had hoped to offer the world the image of a mature, prosperous and ready economic leader. But Operation Car Wash has exposed the weakness of the Brazilian state and revealed that it has a long way to go before it can be trusted with a greater international role. This has created a global reticence to engage with the Brazilian market, exemplified by a 36 percent decline in foreign direct investment in the country, according to the UN’s Economic Commission for Latin America and the Caribbean.

Operation Car Wash has also decimated the confidence of the Brazilian people in their own government. Having enjoyed the potential of greater favor in the international system, Brazilians were hoping to hold the standard for South America’s economic rise.

Yet, all is not lost for Brazil. In fact, the future could be bright.

The revelations of Operation Car Wash have sparked widespread mobilization. Seeing the political scope and depth of indictments connected to corruption, the judicial system has actively implemented the 2013 Clean Companies Act, determined to exact justice. The Brazilian population has not stood idle in the process. In March, Brazilians in all 26 states and the federal district took to the street.

With President Rousseff’s impeachment hanging in the balance, it seems that this “political scouring” may either reveal a pristine economic shore awaiting the international community in the future, or portend darker days ahead.