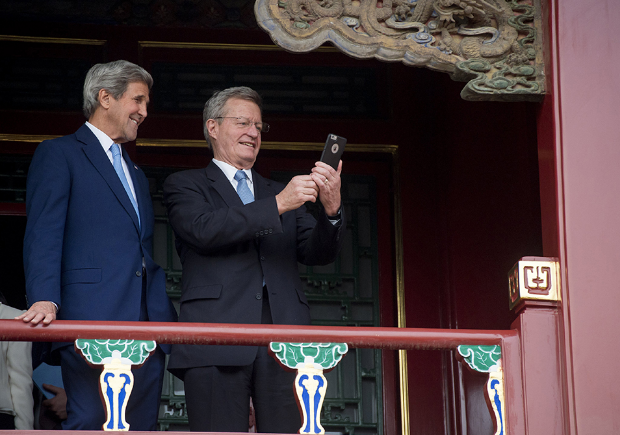 NANJING – U.S. Ambassador to China, Max Baucus, visited the Hopkins-Nanjing Center on Thursday, October 13, 2016. Before President Barack Obama nominated Baucus for Ambassador to China in January 2014, Baucus served as the longest Senator for Montana in U.S. history. During his tenure as senator, Amb. Baucus served on several committees including finance, taxation, deficit reduction, foresting and infrastructure. He also helped the United States push through Free Trade Agreements with several countries, permanently establish a relationship with China in 2000 and actively support China’s entrance to the World Trade Organization in 2001. During his time visiting the Hopkins-Nanjing Center, Amb. Baucus shared a dinner with current students before giving a speech to the student body.

Kathryn Miles, a second-year Master’s student at the Hopkins-Nanjing Center says, “I really appreciated the opportunity to eat with the ambassador, Consul General, HNC administrators and students. The ambassador was eager to answer students’ questions and was very optimistic about the future of the U.S.-China relations, and he stressed the importance of working together to resolve differences. He spoke fondly about his travels throughout different parts of China, and at the end of dinner the ambassador showed that he was in touch with Chinese culture — we started a WeChat group and everyone at the dinner joined! I think a lot of my fellow students and I hope to have a career in influencing U.S.-China relations in the future, so this chance to meet the ambassador and ask questions about his experiences was a fantastic and rare opportunity.”

Beginning his speech, Amb. Baucus commented how impressed he was with the quality of students at the Hopkins-Nanjing Center after meeting and conversing with several students over dinner. He then highlighted the importance of the U.S.-China relationship in world affairs, stating that, “all of us are privileged to be here at this moment in time and history, and as such an obligation has been given to us to not just think, but to act. A lot of life is action. And, sometimes, this may involve taking risks,” he reflected.

Amb. Baucus reflected on taking a risk as an undergraduate student by staying overseas for a year from 1962 to 1963 hitchhiking around the world with just a knapsack, a sewing kit, and the shirt on his back. During that time, he remembers meeting the terrific people and seeing the most wonderful things. While staying at the YMCA in New Delhi, a man told him that if you call up the Prime Minister of India on Thursdays, he regularly meets with foreigners. Amb. Baucus was only 21 years old at the time, but decided to see if it was true, called, and got an appointment to meet Prime Minister Nehru! Though their half hour was spent making small talk, the meeting left a big impression on Amb. Baucus. After their meeting ended, Amb. Baucus watched Prime Minister Nehru as he spoke and met with several dozen Indians from Bangalore, India. It was not until in the Belgian Congo, however, that he realized his calling was public service. The world was developing and getting smaller. It is our job to protect things and make them better. Even if you make mistakes, Amb. Baucus maintains that this is good; you are doing something and your next choice will be a better one after learning from experience.

Amb. Baucus commented that rising China is an exciting country to be in because of its “pragmatic, energetic and practical” people. He is always struck by how much China has progressed from the Open-Door policies initiated in 1979 by Deng Xiaoping. “I try at my job to encourage as many exchanges as possible in China,” Amb. Baucus says. Besides supporting all kinds of exchanges from environmental protection to healthcare programs, he also encourages as many congressional representatives as possible to come over and visit China. However, he is disappointed that more American students do not come to China to study. He believes it is critical for students to learn here given the increasing need and responsibility for both countries to cooperate on global issues.

Amb. Baucus now questions whether China and America will be able to cooperate for both countries’ mutual benefit. Amb. Baucus holds that “a lot in life is not inevitable; a lot in life is what we do with it… [Therefore, we] have no choice but to try our best.” He wants to remind students how lucky we are to live in this time; he believes we have not only the ability, but the obligation given that ability, to serve in a way that facilitates the positive progression of our countries’ and societies’ relationships as stewards to the planet. It is important for both Chinese and foreign students to take advantage of our time studying and working together. The main takeaway, he says, is that “we are here for a speck of time…[and with this] incredible opportunity an obligation has been given to us; when we leave this place [we must] leave it in as good of shape or better than we found it.”

Next post Much Ado About Nothing?
The SAIS Observer Staff