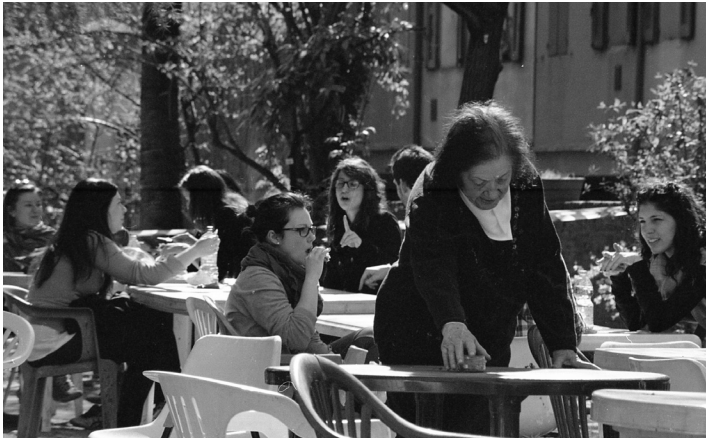 This article was published in The SAIS Observer in 2013, and is part of our “From the Archives Section,” which aims to digitize consequential stories from the past.

The sun is shining, the wind is lilting softly through the trees, and it is a glorious day. In fact, it is a perfect day to be eating pizza from Spacca Napoli in the park with friends. As we settle down to eat under the dappled shade, a woman approaches us, yawping in a quick, staccato Italian and gesticulating wildly. She is an older lady, but remarkably spry; her eyes glint, belying an inner guile. And it is this guile that she now unflinchingly pins upon our unsuspecting group.

She drives among us, screeching insistently, scattering us from our seats, shooing us away. As we flee to a hopefully innocuous part of the park, I glance back to see her fussing about – tidying the absent mess we must surely have left behind – and I see her smile a deeply satisfied and toothy grin. We have just had our first encounter with Signora Anna.

The Johns Hopkins SAIS Bologna Center has been in its current location since 1961, and for as long as anyone can remember, the Giardini San Leonardo has been its neighbor. While parks are common in greater Bologna, greenery within their walls is a rare sight. Rarer still are parks as well-kept as our San Leonardo.

However, it was not always so. Ten years ago, the park teemed with “less desirable types” – known locally as urbano indiano – that had set up residence in a shanty town of wooden shacks and the hulking scruff of large dogs. The place was the epicenter of all kinds of trouble, and eventually fire marshals and police were called in to enforce evictions – although even then, the park continued to serve as an unremitting hub for low-level disorder.

As Raffaella Besola, receptionist at the Bologna Center, describes this period in the park’s history: “It was chaos, a no-man’s land.” As one can imagine, the administration of the Bologna Center was less than thrilled with their neighbor, and wanted to manage the irritant that the park had become. A number of plans were put forward to the city government, including one championed by former Center Director Robert H. Evans.

Evans’ plan was ambitious: He wanted to extend the Center – by this stage, desperate for space – out into the park, creating two interleaving civic spaces. The university would be brought out from behind its fortress, and the locals would be able to mingle with students beneath SAIS porticoes. However, for this plan to succeed, an exception to the “volumetric limit” of the Bologna Center building – as set by an obscure city regulation – was required, and was not forthcoming.

After extensive discussions, the city agreed that a “friends of the park” committee should be formed to keep the park in good order, and the Bologna Center would be a member. Professor Marco Biagi, a visiting professor at SAIS infamously shot by the Red Brigades in 2002 for his role in advising Italian Prime Minister Berlesconi on Italian labor reforms, wrote the founding statute of the new association.

There was one local woman who was especially keen to see the park restored to its rightful place as truly public space: Signora Anna.

Signora Anna hoped the park could be a comfortable place for the elderly, as well as SAIS and University of Bologna students, and she soon became the park’s self-appointed keeper. Membership dues were collected, and under Signora Anna’s stewardship, the patchy grass began to regrow and the rubbish began to disappear. Over time, the Bologna Center donated new garden furniture, installed a ramp for the use of the elderly, and provided the funds for a gazebo.

Signora Anna began to set the rules of the park, and to enforce them in her own strict way. Before long, the park flourished. However, even under Signora Anna’s stewardship, the park manages to generate the occasional controversy. For example, when the city government insisted that dogs should be allowed within the park, a debate escalated into a stand-off between Signora Anna and the city mayor.

The stand-off became a running battle: signs allowing dogs were erected, only to be covered up, or to mysteriously “disappear.” Eventually, the city effectively abandoned any pretense of enforcing Italian citizens’ right to enter Giardini San Leonardo with a canine, and to this day, no dogs have ever been seen in the park. As Bart Drakulich, committee member of the Friends of Giardini San Leonardo and Director of Finance and Administration at the Bologna Center, puts it: “Signora Anna wins all battles of attrition.”

Little is known of Signora Anna herself. An older woman, she lives alongside the park on Via San Leonardo, and she is often spotted in cafes and shops on Via San Vitale. During the warmer months, she can be seen in or around the park grounds, diligently cleaning up public litter, dispersing the undesirables, and strictly enforcing the (that is, her) park rules. As one student who wished to remain anonymous said, Signora Anna can be “mad like a fox,” ruling the park with a loud voice and an iron fist. But it cannot be denied that Signora Anna gets results, and she is a woman on a mission.

According to Signora Anna: “The main problem is to control the drug addicts. I have seen seven young Italian students die from drugs in the park. My main aim is to keep the students busy organizing activities and events in the park instead.”

There is a classic Italian film called “Cinema Paradiso,” which recounts a filmmaker’s memories of the small village of his youth. As a child, he would watch his neighbors party into the night in the town square, until a seemingly crazy man would – inexplicably and like clockwork – charge into the square shouting: “La piazza è mia!” Eventually, the revellers staggered home to where they belonged.

Near the end of the movie, the filmmaker – now a man – finally returns to his home village after many years of absence, and in the piazza, he encounters the same strange man. He is much older, and still shouts “La piazza è mia!” But now, no one listens to him. Even the indefatigable Signora Anna is unable to look after Giardini San Leonardo forever. Her dream is to see the park managed directly by the Bologna Center, but the city government does not share her willingness to relinquish control of its public spaces. What will happen to the park then? Signora Anna is adamant about what she will do: “La guerra!” – “We fight!” A remembrance event for Marco Biagi will be held in the park in the next month.

In December 2016, Signora Anna was attacked near her home and was hospitalized with two broken ribs.

Previous post Eating for Your Country: The Irresistible Rise of Gastro-Diplomacy