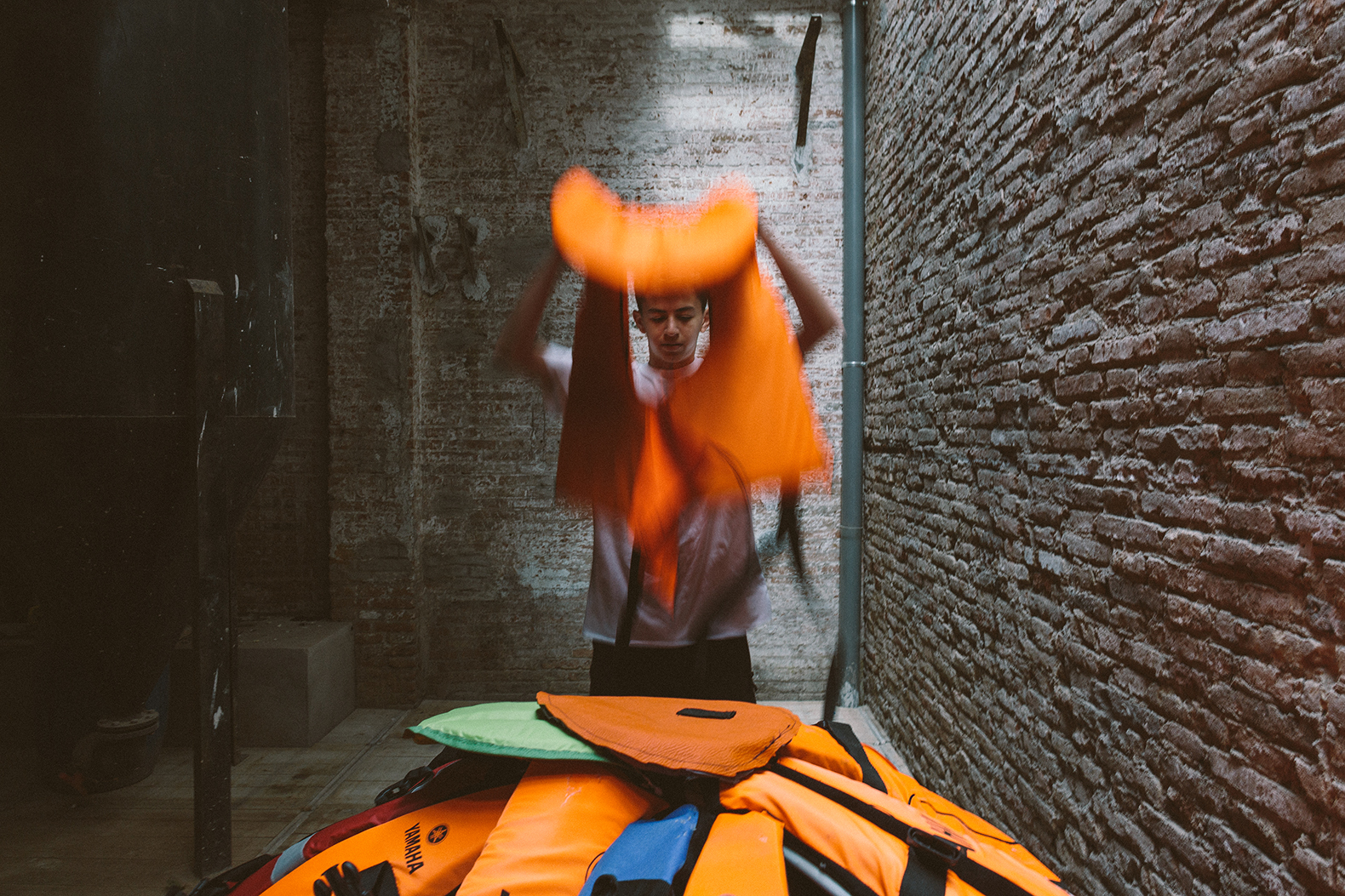 This winter, an art installation appeared in the Sala Borsa on Piazza Maggiore with both personal and thematic ties to the SAIS community. Entitled “Save Our Souls,” Achilleas Souras’ artwork brings the reality of the refugee crisis to light through the construction of small structures using the life jackets discarded by refugees as they crossed the Mediterranean Sea on their way to Greece.

Based in Barcelona, Achilleas is not a SAIS student, nor even a university student yet. However, his arrival in Bologna this winter was the result of an artistic and academic trajectory that brushed Johns Hopkins and SAIS in more ways than one.

Now 16, Achilleas was just 10 years old when he was accepted into the Johns Hopkins Center for Talented Youth (CTY) summer program. Six years later, he arrived in Italy ready to make a statement about the condition of the international refugee crisis, a topic that has been the focus of many SAIS students’ attention in recent years. The work was exhibited in the Sala Borsa, a student and community center in Bologna.

From across the vast Sala Borsa space, Achilleas’ work seems almost like a small, multi-colored igloo. Made entirely from life jackets used by migrants and found on the beaches of Greece, a closer look at the structure serves as a reminder of the original purpose of each orange and yellow brick.  According to Achilleas, this is purposeful.

“The intention [of the structure] is to serve as both a symbolic and practical object,” he said in an email interview with the Observer. “Primarily, it is there to inform people of the crisis and to raise awareness so the viewer does something to help. You can also of course execute the concept as a real shelter and protect yourself on land after surviving a dangerous sea-crossing.”

Achilleas originally came up with the idea while in tenth grade. His school, in connection with their reading of Michael Ondaatje’s book “Anil’s Ghost,” organized an exhibit entitled “Refugart” to raise funds and awareness about the present refugee crisis using discarded life jackets. Achilleas and his family contacted people on the island of Lesbos to help source the materials and get them delivered to his school. While Achilleas did not originally know what form his contribution to the exhibit would take, his with the materials provided some clarity.

“When I actually got my hands on the first discarded jacket that was delivered,” he said, “it was a huge source of inspiration and a humbling feeling to create something out of these items that had been used to save someone’s life.”

Achilleas has lived all over the world, but he credits some of his international outlook to his time at Johns Hopkins CTY six years ago. “What struck me most was the international diversity of my class,” he said. “I emerged from it all with a sense of knowing that I wanted to pursue a deeply probing, international education.”

So far, it seems that pursuit has been a successful one. Bologna is just one of the stops Achilleas and his exhibit have taken. “Save Our Souls” was originally displayed at the Maritime Museum of Barcelona, and has made stops in Bologna, Cape Town, the Saatchi Gallery in London (via web exhibit) and the MoMA in New York (also via web exhibit).

In 2017, it will be featured in Milan; from there, Achilleas hopes to proceed to Los Angeles, and perhaps to Canada and Russia as well.

See a video model of the exhibit here.

Lisa Martine Jenkins is the Bologna Bureau Chief for the SAIS Observer. She is an MA student concentrating in Energy, Resources, and the Environment at SAIS Bologna. You can find her on Twitter at @lisa_m_jenkins, or on her website lisamartinejenkins.com.

Next post “Not My President’s Day” Rally – Photo Gallery
sgrosve2