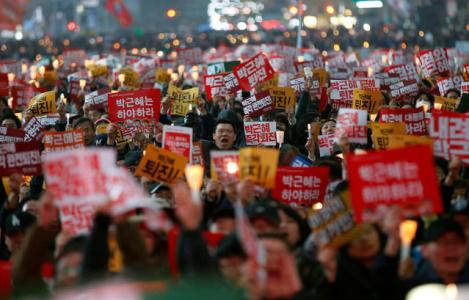 Last month, the South Korean National Assembly voted to impeach President Park Geun-hye after a political scandal sparked protests nationwide (for background, see Julia Wargo’s article here). President Park has since been impeached. We spoke to several young Koreans to find out how they were feeling about the current situation in their country. The overwhelming feeling from those we spoke to was anger and disappointment.

Korea has a long history of political corruption, but according to these young Koreans, President Park took the corruption to a new level.

Bora Yang, a university student in Busan, explains, “I feel it is certainly shameful. The situation resulted from the accumulation of Korea’s corruptions since Park Chunghee, the current president’s father. It’s regrettable that Koreans just did not pay attention to the corruption before, accepting the reality that corruption is everywhere and impossible to remove. But the situation now is really serious.”

She also mentions the role of chaebols, large Korean conglomerates, in covering up Park’s corruption. Gayeong Jeong, a Seoul native now working in Washington D.C., shares her disillusionment with Korean politics over the close ties between the government and large conglomerates. She claims, “Politics work for the rich, not for the citizens.”

Horyun Sung, a freshman at Seoul National University, shares his frustration with Park: “Many presidents in Korea have had pros and cons but President Park only has cons.” The anger with the Park administration has built up over the past three years she has been in office. Several of the Koreans with whom we spoke mention specifically the poorly handled Sewol Ferry disaster which resulted in the deaths of 304 people, mostly school children.

Youngmin Jang, a resident of Busan, shares why this specific controversy has sparked such outrage: “People think what President Park has done breaks the basis of our democratic system. People voted for her to represent the people’s opinion, not to benefit Choi Sunsil’s personal interests. It is so inappropriate.”

The Park Geun-hye controversy has spurred political action across South Korea. At in November, as many as 2 million Koreans took the streets to protest the president.

The protests polarized the young Koreans with whom we spoke. Many supported and even participated in the protests. Joohee Kim describes the atmosphere of the protests: “it was quite fun actually… people were singing and shouting together. We were all holding candles and people were really nice and organized.”

Horyun Sung attended the protests in Seoul on three occasions. He explains the importance of the protests: “peace and order were the values that Koreans wanted to restore, and through the protest we wanted to demonstrate the right values in the right way… we believe that this way of shouting out our voice was meaningful and powerful. “

However, some criticize the protests for being insincere and sensationalized. Hojoong Kim is a recent graduate of the University of Illinois at Urbana-Champaign who has recently returned to his hometown of Seoul for work. He speaks out strongly against the protests. “Koreans have too much interest in politics.”

Before Park’s impeachment was confirmed, Hojoong Kim emphasized patience. “I am just waiting for all the constitutional procedures. We have constitution, congress, and a court of justice. Everything should be determined by those three. We cannot make decision by how the people feel.”

Hojoong Kim asserts, “The one million people protesting do not represent all 51 million Koreans.” He questions the sincerity of the protesters, sharing “it is weird to see middle school and high school students at the protests. How do they understand what is actually going on?”

Kim points out a history of hypocrisy in Korean protest culture. In 2008, massive protests broke out against importing US beef in response to fears of mad cow disease. However, Kim points out, “Seeing people now waiting for 3 hours to get a Shake Shack burger in Gangnam teaches me being emotional is a really bad thing.”

Despite these criticisms, some, like Joohee Kim, insist the protests pressured the National Assembly to respond. Jeewon Sa emphasizes other actions taken by her fellow Koreans. “After hearing the news [of Park’s impeachment], I felt really glad there was still hope the citizens could lead to making a big change. Not only did they go out to the streets and show their will, they called their districts’ congressmen and convinced their congressmen to cooperate in impeaching Park.”

Hope for the Future

Several of the folks we talked to criticized the distance Park maintained from the public. Most recently, as Bora Yang describes, President Park visited the site of a massive fire in Daegu, but refused to speak with the affected citizens. Hojoong Kim explains, “Korean people prefer a leader who comes out on TV to communicate with normal citizens, however President Park did not like media exposure.” He criticized how she would privately make decisions without informing the populace personally.

Youngmin Jang suggests that future administrations increase the transparency of the President’s movements to the public, specifically by releasing daily schedules like is done in the US. Hojoong Kim thinks, “This situation will improve transparency in all aspects of Korean politics, including politics and media.”

In addition to changes to the system, the controversy has changed the nature of political involvement of the populace.

Gayoung Jeong plans to be more critical of individual candidates in future elections. She relates, “I actually voted for Park in the past election, and I feel I was too naïve that I just chose the president by just looking at the party. I did not know much about President Park, but I knew that I wanted to vote for Saenuri Party.” Joohee Kim similarly hopes Park’s impeachment will change how Koreans vote, urging citizens to “think twice and evaluate whether the person is really qualified for the office.”

Although this turn of events made her disappointed in her government, Bora Yang hopes this controversy will lead Korea to become a more democratic nation. Joohee Kim shares that hope, saying, “People will now believe in the value of democracy more than ever.”