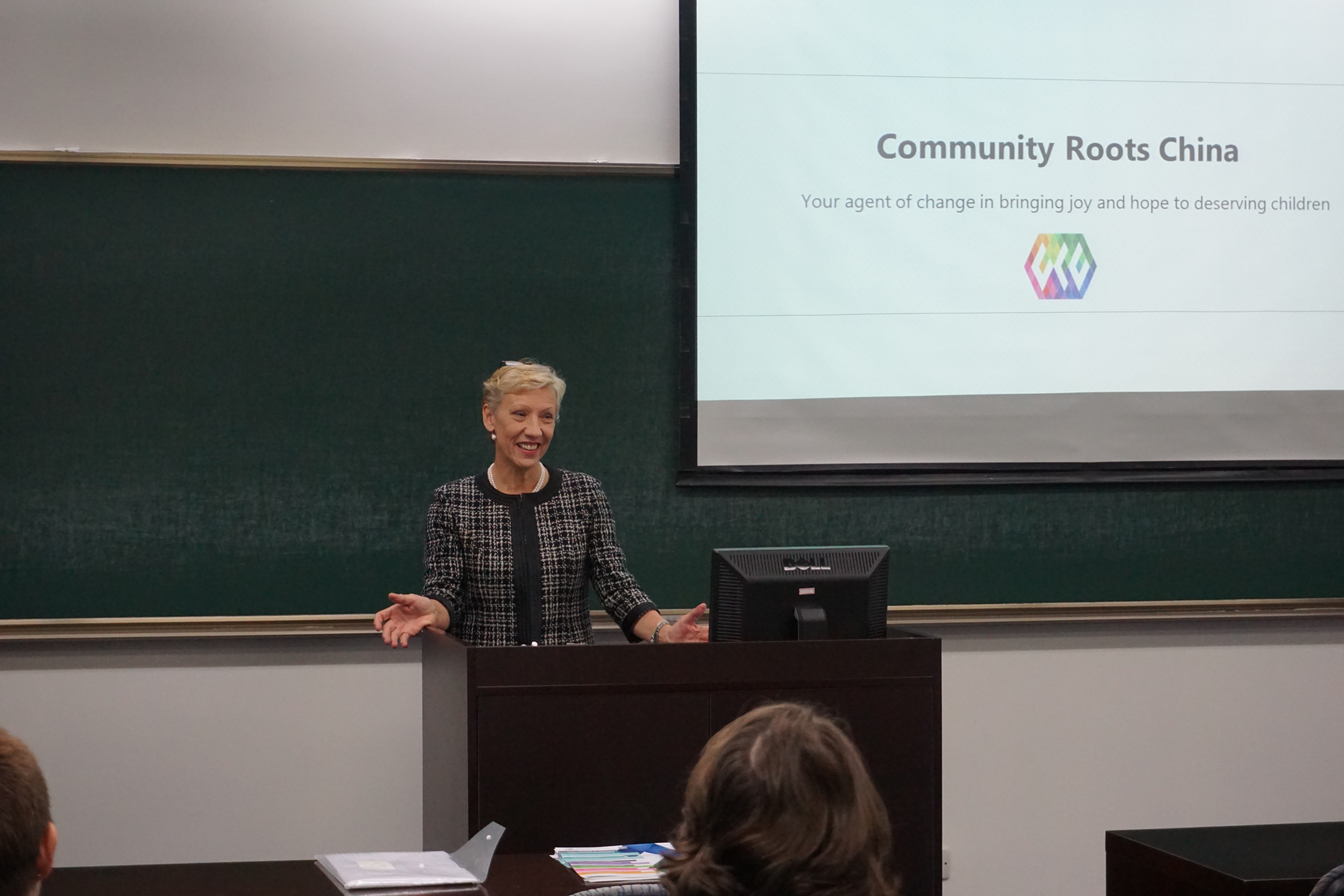 NANJING–Community Roots China works with underprivileged children in 12 provinces around China. Their programmes include the One Heart Gift Bag, which gives bags to primary aged children, the Bookworm programme, which provides books for schools, and the Educational Sponsorship, which pays the fees for students to attend high school or university.

Anna: Hello Marie-Lucie. To start, I wanted to ask you about how you became interested in the social welfare or non-profit sector? Was there an event or experience in your life that convinced you that this was what you wanted as your career?

Marie-Lucie: I started doing charity on my own. We were in Brasilia [where Spoke’s husband was a diplomat for the Canadian government] and everyone had a seamstress, because there were no stores to buy ready-made clothes. I helped my seamstress, I helped her to build a house, just settling the children, she had 8 children. And I then thought to myself, I could do that with a passion. I was doing that by myself in Brazil.

In Canada, I got into an NGO in Canada and learned all the laws – so you’re talking taxation law, the legal setup, how to run meetings. I ran an NGO.

The opportunity came up to move to China in 2003. So we said, okay, we’re moving to China. I started working as a volunteer just to learn. And naturally the country is very different from the Western world. The laws are not in place – the legal system, the banking system, the charity registration system. So I just did what I had to do with my friends as volunteers. Within 3 years, what we were doing was so big that my husband said, “You have to register.” We had no website, no database, no salaries, no employees.

A: The reason Community Roots China is set up as a consulting company is due to the Chinese government regulations on foreigner-run NGOs in China [they are not allowed]. Could you elaborate on how you decided to set it up as a CSR consultancy, and advantages and disadvantages that have stemmed from that?

M: I don’t mind the consulting company because then you ensure yourself that you have a service to deliver that the community wants to purchase. You get public funding as an NGO. But maybe this is a different country, maybe the country does not realise that they need your service, maybe they outright don’t want your service, but because you keep being funded, you’ve got the money to keep going without the check and balance that the private sector brings to you. If you have a service to sell and no one wants to buy it, there’s a message there. What are we doing wrong or what prevents us from being sustainable?

We are selling our services on a consulting basis. The companies need us, they are buying our service, because they don’t know how to reach the children who need their resources. The corporations want to do CSR, [but] they don’t have time to go digging into the countryside: where are the children, what’s the process, understanding all that. So we are their service agency.

A: What about the disadvantages?

M: The law is changing so that none of the international NGOs, as of January 1st, if the law comes into effect then as it is supposed to, none of the international NGO will be able to operate in China unless they are registered with the police and they will not be able to receive funding from overseas. You cannot depend on money coming in from anywhere else, to do the purpose for which you set up this NGO.

You know, we want to bring resources to the children, but we have a double purpose, we also want to trigger the buy-in by the Chinese companies to the CSR mode, pattern. We want to integrate the Chinese company to think and operate with a CSR programme. Which they don’t right now, in the greater majority [of cases].. If you look at the direction the government is going, they’re basically sending the message that “You in China, you’ve got to put Chinese money in your Chinese bank account to do Chinese CSR in China.” They’re saying, don’t count on your foundation in the United States. I think the country is making a concerted effort to get their own nationals to step up to the plate.

A: How are you going about marketing CSR to Chinese corporations?

M: The stealth or personal relationship approach. You talk to the people who are already convinced, knowing that they have relationships of which you don’t know anything about. The people we know, they might be the wife of somebody, they might be the colleague at Fudan University, and we do have Fudan University as one of our sponsors, they sponsor the Bookworm Project. You just have to let it go. So all we can ensure, is that we do it well, we are a good role model for others, at the end of the day we want them to see the benefit for the community and we want the children to have resources. It will take a while. Sometimes, an idea takes a long time to gain traction, and all of a sudden there’s incremental pace. So we’re not yet at the incremental pace, we’re just at the trying to gain traction. Especially in the Chinese sector.

There’s hope. Actually, as a company, we’re treading a fine line, because we have to stay in the market in order to influence it. We’re treading this fine line of having to work, deliver, and yet also pitch the bigger picture to those who are not yet on board. We show, there is a display. Because after five years, we did deliver 42,000 or so gift bags. Nobody can say it’s just a gift bag to a primary school child, it has no consequence. When you deliver 42,000 gift bags somebody somewhere is being encouraged with the bigger picture of what life can be and what communities can be, of what helping each other can be. It does make an impact. After those five years maybe some corporations will say, you guys have done this for five years, we could do that. The bigger perspective is that it’s going to take time.

A: Many SAIS students will be looking for satisfying, fulfilling jobs in the near future. Do you have any advice on students looking for work in this area?

M: If you’re passionate about something, there’s a little something that tells you. When I did my second year of my MBA, I thought to myself, do I want to work with Volkswagen, Whirlpool, no that’s not where my passion is. But when I thought would I like to administer women’s shelters or after school programme – oh yes I would, I could put my whole passion into that. So if a person says I could get excited about saving the environment, anything that has to do with the environment, that person has to stick with their passion. Start little, be very humble, build their profile and their CV, based on small accomplishments that add up to a lot. First, you serve as a volunteer. Then, a position becomes open and you enter into that position. Then, you’ve been there for two, three years and you can become a director. Gain that expertise. Be willing to make the effort over and above what your salary range is, or what your managerial level is at, in order to be seen as wanting to go up, and having the skills to go up in management.

Focus, be ready to enter at a lowly level or in a lowly manner, but if that’s your passion, it will quickly flourish. There is space. And in that space, there is need.

A: If you’re already employed, is it worthwhile to raise CSR as a potential activity to your employer?

M: There’s a guy who works for Morgan Stanley. He’s 100% sold on the idea of CSR. He’s the head of the IT department. He says, the best way to improve your profile with the head of the company is to do CSR, and then go knock on his door and ask him for money. We created CSR Social Group, we did five evenings in a restaurant with beer and things like that, and we invited all the top managers that we knew, including some pretty big managers, VP, GMs, etc. To talk to the young people, we divided them by table, topics. It was very well attended.

We’ve been talking about CSR, and social enterprise, and there is a third element. That is leadership. To be bold enough to go and knock on anybody’s door. That is a tell tale sign of a leader. You’re proactive, you don’t wait for anybody else to do it before you do it. Then you say to the others you could do the same thing as I did. I knocked on the president’s door, and he didn’t fire me because of it, and I talked to him, and he gave me $200, $500, and now he knows me by name. Someone who will go and ask. To step up and take initiative is a characteristic of a leader.