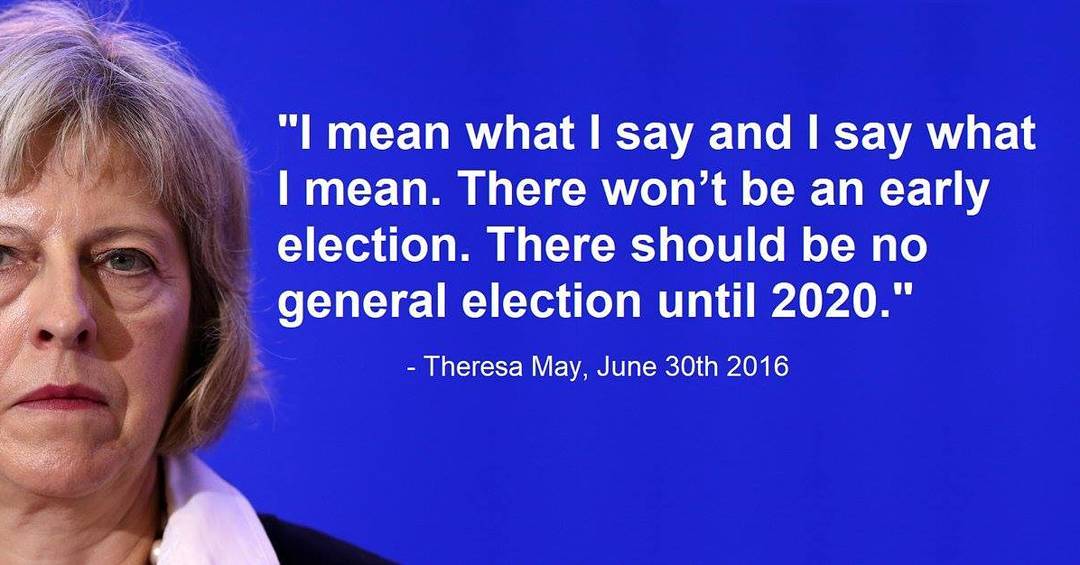 On Apr. 18, British Prime Minister Theresa May announced her intention to hold a snap election, making use of a loophole in the Fixed-term Parliaments Act which allows her, with a two-thirds majority in the House of Commons, to call a general election before the parliament’s five-year term is finished.

On June 8, the United Kingdom will head to the polls for the third time in three years, in what is already being marketed as a vote on the issue of a hard Brexit.

Jeremy Corbyn, leader of the Labour opposition, has welcomed the election as a chance for the public to voice their opinions on May, the unelected prime minister who is leading the charge.

However, he should be wary. This snap election is the opportunity that May has been seeking to annihilate the opposition, take unopposed unilateral action and possibly change the face of British politics for the next several decades.

As the polls currently stand, Labour is likely to lose heavily. The three major U.K. opinion polls all find Labour – and Jeremy Corbyn in particular – trailing the Conservatives by at least 20 points. While popular local MPs may be able to hold on to their seats, it is almost certain that Labour will cede key seats in the North and the Midlands – traditional Labour strongholds that voted heavily to leave the EU.

In the South, and particularly in socially liberal cities like London, Bristol and Brighton, Labour will have to fight against the advances of the Liberal Democrats, who have successfully positioned themselves as the vocally pro-European party in British politics. Remain voters who feel betrayed by Jeremy Corbyn’s lukewarm response to Brexit, and his continued inability to effectively challenge Conservative policies, will be thinking long and hard about switching their allegiance to the politically weak but ideologically strong Liberal Democrats.

Multiple sitting MPs have already announced their intention to step down before the election, due to their disagreements with the party leadership, a situation which is unlikely to inspire confidence in those who are habitual Labour voters but dislike Corbyn.

The Conservatives can be confident in their ability to increase their majority massively, possibly to the extent that the remaining parliamentary parties would be unable to mount an effective opposition to policies which are popular with Conservative MPs.

UKIP (the pro-Brexit U.K. Independence Party) are unlikely to make a strong showing in this election – many former supporters view them as a one-issue party that has now served its purpose, and its internal power struggles are becoming increasingly public and embarrassing. It is expected that the Conservatives will sweep up much of the UKIP vote, which will give them an unprecedented presence in the North of England with historically working class industrial voters who prefer Labour or UKIP.

If this election follows the path that most pundits and politicians are expecting, Labour could lose their position as the parliamentary opposition, a result which would bring U.K. politics into unknown territory. The opposition is a necessary part of the U.K.’s representative democracy, acting as a much needed voice of dissent and criticism, particularly for those who didn’t vote for the majority party. Whether Labour or Conservative, the role of the opposition party prevents the majority party from acting unilaterally and making decisions which may not be in the best interest of the people or the future of the country. The opposition represents the views of a significant proportion of the general population, and without them people will find it increasingly difficult to challenge the actions of the sitting government.

In the case of the current Conservative government, the opposition acts as a necessary mitigating force against the push for a hard Brexit. While the 2016 referendum delivered a result in favour of leaving the EU, the fact that the majority was so slim (only 52 percent) enabled politicians, civil society and ordinary people to demand a more moderate approach to Brexit. However, they may lose this ability if the snap election swings heavily in favour of the Conservatives.

Theresa May is positioning this election as a chance to increase her mandate to pursue an isolationist and economically uncertain policy which would see the U.K. lose its position as a world leader. Whether many in the party like it or not, the Conservatives have usurped UKIP’s position as the Brexit party, and May plans to conflate a vote for her party with a vote for hard Brexit, in order to increase her power to act as she sees fit.

Left-wing voters are pessimistic about the ability of Labour to return to power in the near future, and the results of this snap election are unlikely to improve those odds. Without a strong and effective opposition to challenge May’s decisions and demonstrate the viability of its own policies and views, the Conservatives are likely to be reelected in 2022 and possibly even in 2027 without a serious competition. Jeremy Corbyn’s Labour have squandered their chance to increase their favorability through opposition, and it seems likely that this mistake will cost them for years to come.

For those opposed to Brexit, this election has the potential to transform the U.K. into an unfamiliar and unappealing country, and as such, this snap election is poised to change the shape of British politics and society for the foreseeable future.

Issy Schmidt is the Managing Opinion Editor for the SAIS Observer. She is an MA student concentrating in General IR at SAIS Bologna. You can find her on Twitter at @issymayaschmidt.