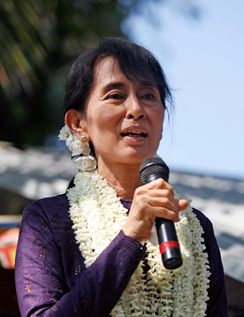 NANJING – As Rohingya Muslims flee to Bangladesh to escape the Myanmar army’s persecution, Aung San Suu Kyi, Myanmar’s de-facto leader, received heavy criticism from the international community over refusing to condemn and confront her military for the violent crackdown in Rakhine State.

However, are these criticisms against the Nobel laureate for failing to condemn the military’s excessiveness in dealing with the Arakan Rohingya Salvation Army (ARSA) fair? Are we expecting too much from a civilian government whose political power is shared with the military junta?

While the Rohingya Crisis clearly threatens the stability of Myanmar and presents a serious humanitarian concern, the world may be expecting too much in demanding that Suu Kyi and her one-year-old civilian government resolve an issue that has plagued Myanmar for several decades.

Since the beginning of her political activism, Suu Kyi has been portrayed as a champion of human rights and a beacon of Myanmar democracy by the international community. This depiction continues to be entrenched in the minds of people around the world, even as Suu Kyi assumed the role of a politician.

While many expected Myanmar’s democracy icon to speak out against the atrocities being committed against the Muslim minority, Suu Kyi’s “silence” over the Rohingya Crisis provides evidence of a shrewd political move. Many fail to realize that Suu Kyi now plays the role of a politician in a young and fragile democracy whose goals of continued democratization could only materialize with her civilian government in power.

In addition, the need to remain in office is highly contingent upon the support of her highly nationalistic grassroots supporters. Speaking up for the most alienated minority in Myanmar may not only risk losing many of her supporters, but also come into conflict with the military.

It is also important to realize that Suu Kyi’s government operates under the 2008 junta-crafted constitution. Under this constitution, her government shares power with the military, which possesses a quarter of Parliament seats and controls key ministries such as defense, home affairs and border affairs.

In the power-sharing arrangement between Suu Kyi’s civilian government and the military, the civilian government does not have control over the military that is responsible for the violence and atrocities being carried out in Rakhine State today. With this in mind, it is counterproductive to criticize and alienate a Myanmar democracy icon in a fragile state.

While the Rohingya Crisis continues, it will be important for the international community to realize that criticisms of Aung San Suu Kyi may not result in a resolution. Alternatively, recognizing the limits of Suu Kyi’s civilian government and understanding the complexity of power-sharing structure of Myanmar political scene will be major step in managing the conflict.

Previous post The Turkish Referendum Vote: What Can We Expect From the Reinforcement of the Erdogan Government?

Next post The American and Chinese Leadership Transitions: Perspectives from Nanjing
sgrosve2