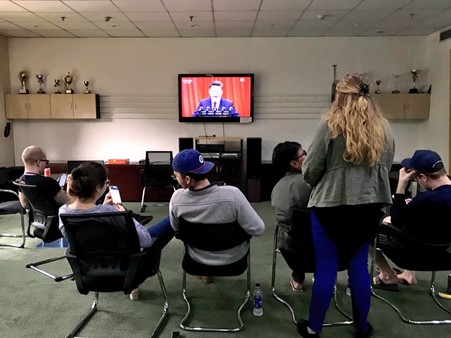 NANJING – The Chinese Communist Party held the 19th Party Congress this month in Beijing. At the Party Congress, a new leadership was chosen. This leadership will set the path for China and guide the next five years. At the Hopkins-Nanjing Center, SAIS students gained an unique perspective on this major event. Significantly, the 2018 MAIS class experienced the leadership transitions of both China and the United States. Last year, students watched as the 2016 U.S. Presidential Election results rolled in, and this past week they had a front-row seat to the 19th Party Congress. However, reactions to these two events varied significantly at the Center.

Before the U.S. Presidential Election, the Center hosted several speakers and roundtable discussions about the candidates and the merits of American democracy. Students gathered in the auditorium, sometimes skipping morning classes, to watch the livestream of the Presidential debates. In the weeks leading up to the election, American students asked each other “have you mailed in your ballot yet?”

Many students at the HNC are considering a career in government and were particularly engaged with the election. Kris Rodulfo commented, “Being abroad made me feel more detached from the election, but I was still invested since the results came as such a shock. I would like to work in the federal government and whoever is in office has a direct effect on my willingness to serve. Since Trump is in power, my plan is to wait it out until the next administration.”

The rest of the year was spent discussing one question – “What happened?” Guest speakers and club meetings addressed this topic throughout the spring semester. Just this month, another speaker came to campus to discuss the role of gender during the 2016 election.

As the convention approached, Chinese website layouts were redesigned and red banners were strung up around Nanjing announcing the upcoming event. The student group-chat was dominated by the question “Is your VPN working?” as the government tightened internet controls. Classes such as Chinese Government and Politics turned their attention to the Party Congress, hosting lively debates about possible changes in the Politburo Standing Committee.

Outside of these classes, however, official discussion about the Party Congress was limited at the Center. American student Margie Tanner described the atmosphere at the Center as apathetic: “We all know what to expect with the Party Congress.” Chinese classmates conveyed a lack of sense of participation with the Party Congress since they had no direct influence on its outcome. Chinese youths have a phrase called “cha shui biao” (查水表), which literally translates to ‘reading the water meter.’ It refers to the way that things one says on the internet can be censored and possibly used against them in the future. There have been high-profile cases of people being punished for criticizing the Communist Party during private in-person conversations as well. With this atmosphere, there was not much public discussion about the Congress.

Despite these differences, witnessing both leadership transitions has initiated deeper engagement with U.S.-China relations among HNC students. American student Christian Flores shared, “Trump’s win signaled a withdrawal from the international stage for the country. I think that this kind of withdrawal changed the way I viewed China’s role in the international stage. I now believe that China should continue to push for multilateralism and engage the U.S. even more so than before.”

Caroline Yarber is a second-year M.A. candidate at the Nanjing campus as well as the Nanjing Bureau Chief. She is also concentrating in International Politics.

Previous post Are we expecting too much from Daw Aung San Suu Kyi?