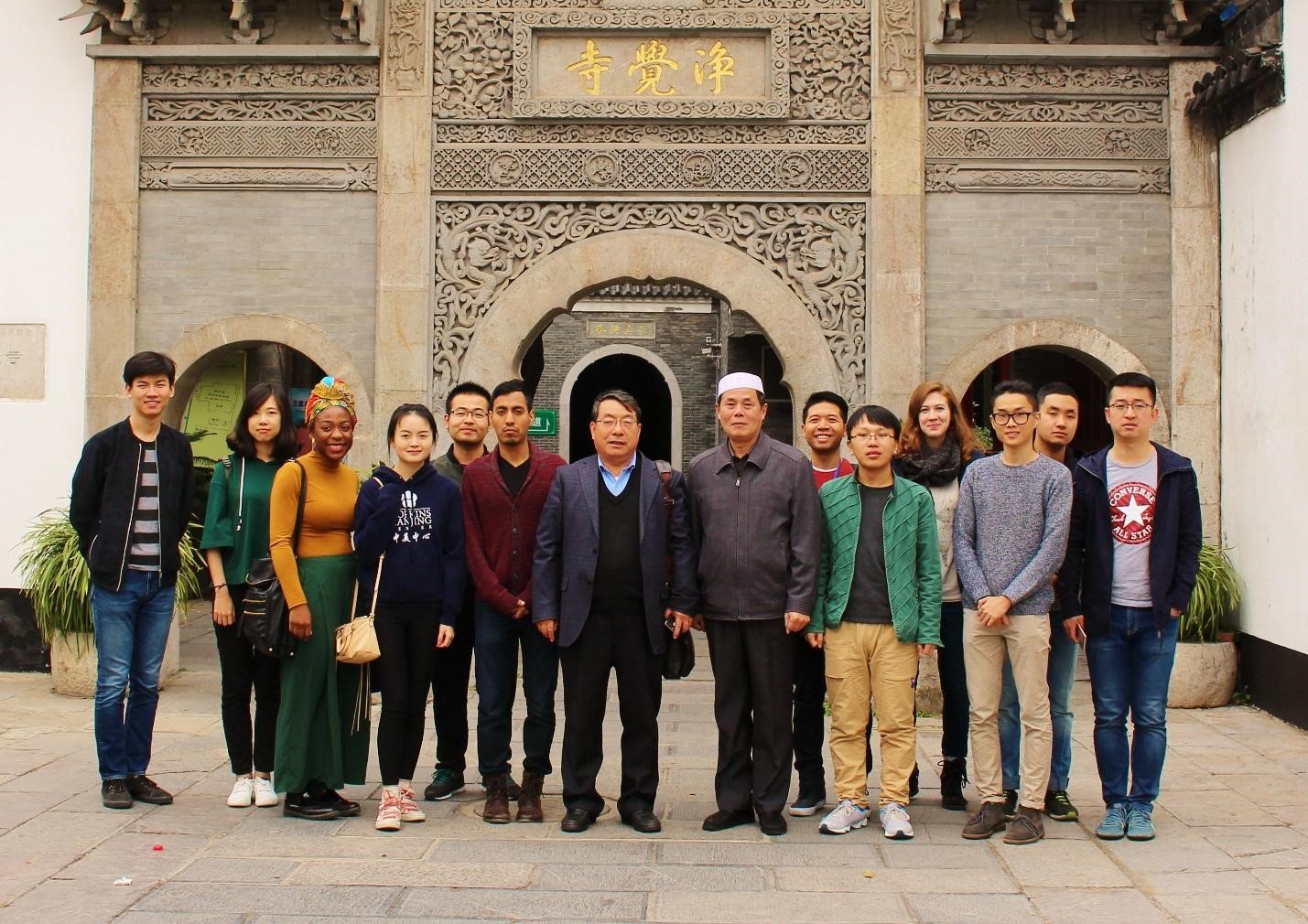 Nanjing: November 11, 2017 – At noon, several students from the Hopkins-Nanjing Center took a half-hour subway ride right to the middle of the city to visit the Jingjue Mosque. Most admitted they had never set foot inside any Islamic center of worship before.

Once inside the Mosque, they were welcomed by Deputy Director of the Islamic Association of Nanjing Mr. Ma and a young volunteer. The deputy director and all the volunteers are Hui people, an ethnic minority group found all over China who believe in the Muslim faith. Soon after entering, HNC student Huang Dan remarked on seeing children playing within the temple grounds, something she never sees at Buddhist temples in China. Visitors noticed that Jingjue Mosque not only functions as a place of worship, but also as a community center and gathering place for Muslims all over the city.

As Mr. Ma led students around the temple grounds, students were brought inside a small museum displaying the contributions Muslims have made in China. He emphasized that Islam settled in Nanjing not through the Silk Road stemming from Persia, but via sea routes through Guangzhou and Hangzhou during the Tang and Song dynasties. This maritime Silk Road connected China, Central Asia and the Middle East. This route not only allowed the trade of goods, but also promoted the vigorous exchange of music, literature and religion.

As the capital of China during the Ming Dynasty, Nanjing played an outsized role in the history of Islam in China. The explorer and diplomat Zheng He, a Chinese Muslim himself, set out from Nanjing to explore Southeast Asia, India and Africa with his great armada. At one point, he even brought home a giraffe, to the amazement of the Chinese people.

On the top of the main prayer hall in Jingjue Mosque are the Chinese characters “無像寶殿”  (Wu Xiang Bao Dian), or a “Temple Without Idols.” The calligraphy was written by the Qing dynasty emperor Kangxi during a visit to Nanjing. Unlike China’s Buddhist and Daoist temples, which are full of images and statues of the many gods and goddesses in Chinese folk religion, this title for the prayer hall reflects the Islamic belief of discouraging the portrayal of all images of sentient beings such as humans or animals, but especially of God or the Prophet.

In a city with a population of eight million people, there are currently 100,000 local Muslims in Nanjing, and another 100,000 Muslims who come from outside the city. Many of these migrant Huis open inexpensive noodle shops or barbeque stands all over the city. On average, Mr. Ma says there are about 1,500 worshippers who come every Friday, including 300 from other Muslim countries such as Egypt or Pakistan. For the migrant and foreign Muslim populations, Jingjue Mosque is an important anchor for their faith and identity in a new city.

Several HNC students remarked on how eye-opening the mosque was. Although the Muslim community in China is ancient and its role in Chinese history is well-documented, its contributions to Chinese culture are often ignored because of its small population. This visit helped HNC students to better understand this community and its accomplishments.

Kris is a staff writer at the Nanjing Bureau. He is a second-year MAIS student majoring in International Politics at the Hopkins-Nanjing Center.

Previous post How to resolve the North Korean nuclear issue: growing concern but little consensus between China and South Korea regarding the role of the U.S.