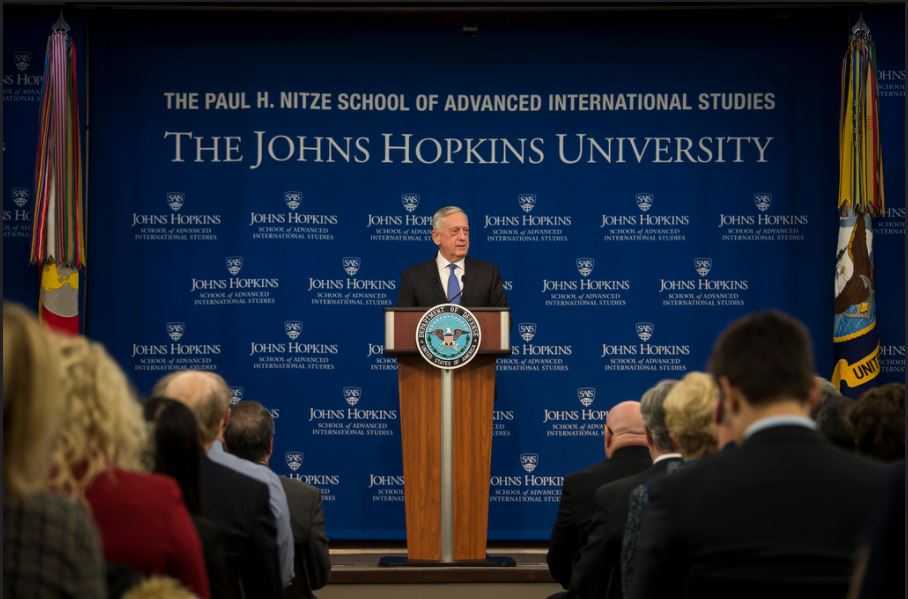 Washington – In a packed Nitze auditorium on Friday morning, U.S. Secretary of Defense James Mattis presented the new National Defense Strategy (NDS), the first to be put forth in ten years. The NDS outlines the Department of Defense’s priorities and its plans for advancing President Trump’s stated national security goals – namely, protecting “the American people, the homeland and the American way of life” and “preserving peace through strength.”

The preservation of U.S. military competitiveness was emphasized as a key challenge throughout: “We must be the best if the values that grew out of the Enlightenment are to survive.”  The Secretary expressed deep concern about the loss of U.S. competitiveness in “every domain of warfare” – the result of technological change, a long period of continuous warfare, and defense spending caps, which have all contributed to an “overstaffed and under-resourced military.” At multiple points during his address, the Secretary expressed frustration with Congress’ inability to provide a long-term, stable defense budget, stating, “We need Congress back in the driver’s seat of budget decisions.”

Mattis then outlined the primary elements of the new NDS.  The first, and most important, element of the new strategy is “lethality”: the U.S. military must be sufficiently large and capable to deter any form of conflict and to win if conflict does arise. Modernisation is a key part of achieving this lethality. Second, the U.S. must strengthen traditional alliances while also seeking new, potentially non-traditional allies. Third, the Defense Department must become more efficient: it must reform its bureaucratic processes to emphasize performance, speed of delivery and effective use of tax dollars.

An issue brought up during the Q&A was the importance of integrating DoD policies with those of the State Department, as Mattis emphasised that the role of the DoD is “first of all to backup the diplomats.” The Secretary also spoke briefly about the challenges involved in pursuing an “America First” strategy while simultaneously strengthening alliances, referring to his recent success in making the case to NATO allies that they should share a greater part of joint defense spending.

In response to an audience question about defense cybersecurity measures, Mattis discussed the difficulty of balancing security needs with the need to protect individual liberty.  He directly addressed the U.S. citizens in the audience, stating that “we need your help” in contributing to the cybersecurity policy debate and determining the proper amount of military involvement in this field.

When asked whether the potential government shutdown would have an effect on military operations, the answer was an emphatic “Yes.” Mattis elaborated that a shutdown would halt the activities of the department’s civilian workforce and seriously affect department morale.

Secretary Mattis concluded his remarks by  encouraging citizens to “notify [them] if you think we’re missing something or are on the wrong track” with the NDS, adding that this is a “raucous democracy,” where participation is valued. Mattis also appealed to the audience to keep in mind the servicemembers working hard to defend U.S. freedoms.

Caroline Zechter is a second-year at SAIS DC, concentrating in Energy, Resources and Environment. She has been known to get very excited about electricity.

Next post Comparing EIA and IEA Reports: Look to China for Global Growth in Renewables
sgrosve2