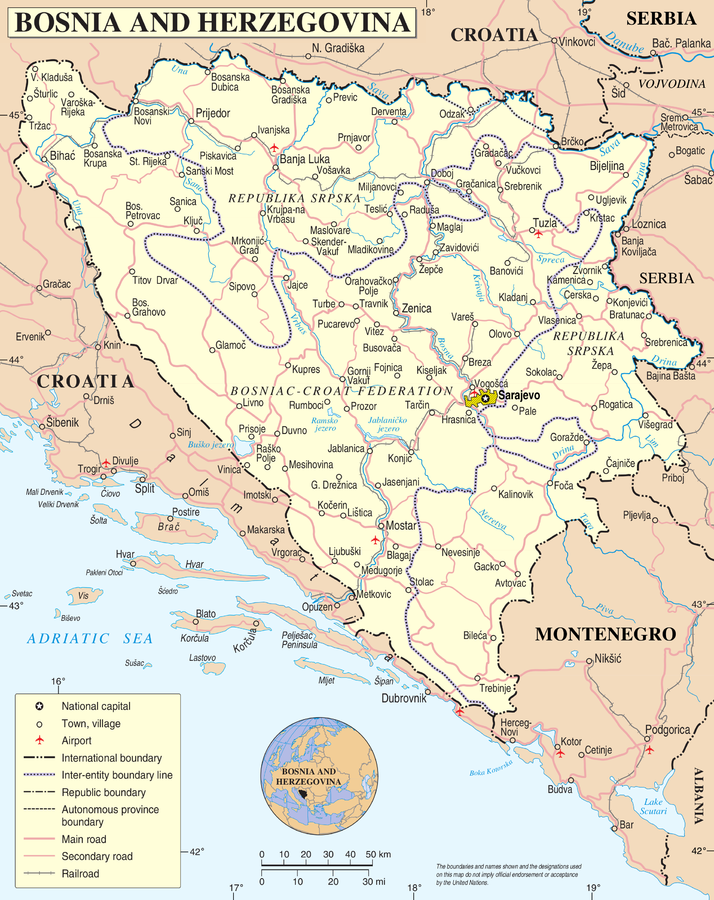 Srebrenica: Without school, the days blurred together. I had allowed myself to lose track of time over winter break, but I knew what today was. Wednesday was the bus ride from Sarajevo to Srebrenica.

The bus passed cemeteries along the roadside. My eyes traced the snow drifting down on pristine headstones. In some places, the headstones outnumbered the houses. They looked newer too.

I turned my eyes into the bus. It contained about 30 graduate students. Only one of us had been to Bosnia before. We were all a bit nervous about where we were going.

22 years earlier, General Ratko Mladić had sent his Serb forces into the United Nations “safe zone” of Srebrenica. On the morning of July 12th 1995, the Serbs began separating the Bosniak men and boys from their families, while the women were bused to a town nearby. They were told the men would follow. Throughout the evening — and for ten more days — gun shots could be heard. When it was over more than 8,372 Bosniaks had been systematically slaughtered. Streets were littered with corpses; in some cases, people committed suicide to avoid being tortured or killed in front of their children. Despite the agonizing memories, some women had returned to Srebrenica in the intervening years.

Our first meeting was with these women. They were a part of the Association “Snaga Zene,” the Women of Srebrenica. As part of an effort to reconstruct the country, Snaga Zene has helped the women rebuild their lives in the Serbian territory of Bosnia. My international crises classes had commonly cited the organization as an example of successful grassroots reconciliation efforts. I was eager to hear the women’s perception of the conflict and their outlook for the future.

As we walked into a room lined with art projects and quotes about the power of musical therapy, we were immediately greeted with the press. I jumped to smooth my clothing and appear put-together, while locals carried more chairs into the room. A few classmates were pulled aside for interviews. All the activity forced us awake after the early bus ride. I thought it would be a modest meeting with a few local women, but it was a full house. I was not sure if we were more eager to hear from them or they were more eager to hear from us.

The crowd settled down, and Snaga Zene’s head psychologist introduced the organization in English. She explained that they brought women of all ethnicities together for social events, therapy sessions, and journeys of reconciliation to Zagreb and Belgrade. A camera man positioned a tripod along the aisle to focus on my classmates as the woman spoke. I shrunk behind someone’s head. One of their new initiatives was a market where the women could sell their crops. The organization even provided the women with greenhouses.

Then the psychologist opened the room up for questions, pushing her glasses up the ridge of her nose to examine the audience. After a few moments of silence, one of my classmates raised her hand and asked what the women’s favorite activities in the organization were. It seemed like a question that danced around the intentions of our trip.

A woman stood up in the back of the room to introduce herself in Bosnian. A different interpreter took over.

The interpreter explained, “She is not formally employed, but she grows crops that she sells through the organization. That has helped her support her family, after they came back at the end of the war. They could have left the country, but she wanted to prove that she is stronger than the men who killed her family members, and they cannot make her move.”

The question was not clearly answered, but we were interested to hear from the women regardless.

Another woman continued, “I am not employed either, and I also grow agriculture and sell it at the market. My brother and father were killed during the war, so my mother and I have had to support the family alone. The organization has helped us do that.”

Again, the question was not directly answered, but we listened intently.

Finally, a third woman said, “I enjoy the annual trips to Belgrade. It is a fun social activity with the other women.”

Another of my classmates stood up and asked, “What were your experiences of the war?” He prefaced his question saying they did not have to answer if it was too personal or difficult — he was just trying to understand the conflict. The interpreter discussed it with the psychologist before she proceeded to ask the question in Bosnian. A few women began speaking over each other until one voice remained.

The interpreter attempted to process the whole dialogue in one stretch. The woman’s voice shook, as she spoke to us in Bosnian. The interpreter’s flat, calm words almost magnified the emotion.

She said, “During the war her neighbor tried to rape her in her home. She ran away, but her father was killed. That’s when she left Srebrenica, but she came back because this is her home. She still sees her old neighbor when she walks her children to school. Her kids wonder why they do not have a grandfather, and she hasn’t told them yet. She wants to tell them when they are older and can determine for themselves whether they like a person or not, instead of disliking them for their ethnicity.”

Another woman stood up, dabbing her eyes before she spoke. The translator explained, “Her father, uncle, and brothers were killed during the war. The United Nations told them it was safe to stay here. Then one night they were telling everyone to evacuate. When the Serbs arrived they divided the men and women. That’s the last time she saw the men in her family. Now this region has local holidays that celebrate the war heroes who killed her family. It is hard, but she returned to Srebrenica so she could visit her family’s graves and be with them.”

Woman after woman rose to share stories of their horror and heartbreak and how they have attempted to rebuild their lives. Then the interpreter signaled that we had time for one more question. My classmate asked, “We are students from all over the world studying conflict and international affairs. Do you have any words you would like to share with the world or advice for us students?”

An older woman in the front row immediately began speaking in Bosnian, apparently eager to inform the younger generation. The interpreter translated, “Chose compassion. You should all love each other instead of fighting wars. War changed everything. I just want to go back to before the war when we were all happy.”

Another woman added, “What people don’t see is that we are all one body. When you cut the other person, you bleed too.”

The interpreter thanked us for coming. It seemed inappropriate to clap after such horrific accounts, but we were struck by the women’s resilience and compassion despite their incredible hardship. The applause lasted a long time.

Caitlin O’Grady is the News Editor for the Bologna Bureau and a first-year MA student concentrating in American Foreign Policy.

Previous post In the Italian electoral campaign, immigrants are a problem

Next post TSO Reviews The League: A D.C. happy hour, but you never get to leave
The SAIS Observer Staff