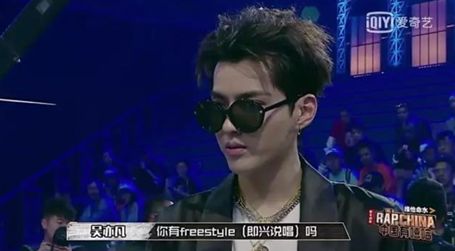 NANJING, China —— Last summer, the question on every young Chinese person’s lips was: “你有freestyle吗？”—“Do you have freestyle?” The phrase circulated in memes and trended on all social media platforms. The rise in popularity of this phrase was all thanks to Chinese pop singer and actor Kris Wu, who appeared as a judge on the popular reality TV show, “The Rap of China.” The country’s first hip-hop TV show, it first aired in June 2017 and brought Chinese rappers from the underground into the mainstream.

On the show, each time Wu decides whether a rapper can “pass” the first round of the competition, he will invariably ask, “Do you have freestyle?” He gave the show — and, as a result, hip-hop — mainstream appeal due to his huge fan base of young people. According to the South China Morning Post, by January 2018, the show had accumulated a total of 2.94 billion views, including 1.3 billion views in the first month, and $46.4 million in advertising sponsorships.

The popularity of “The Rap of China”  can be traced back to 2000, when the first generation of rap groups began to appear on the scene in China. Some record companies anticipated that new music trends, including rock and hip-hop, would spread from the Western world to China, so they created a new rap group called Yincang (literally “hiding”), which released its first hip-hop album Serve the People on December 1, 2003. However, it did not set off a hip-hop boom in China because the market was held back by traditional tastes and music piracy. Chinese consumers simply weren’t ready to spend their disposable income on a genre as new and non-traditional as hip-hop. Additionally, the beginning of 2000 marked a low point in the recording industry: music piracy became a major issue, and the once profitable sales of pop music suffered. Thus, recording industries refused to sign new rappers or publish their records. Many rappers could therefore only create music for themselves, or, if they were lucky, perform in small underground venues like bars. This was the origin of “underground rappers.” It was not until 2016 that the domestic market awakened as more and more local record labels, through copyright authorization and music festival tours, commercialized hip-hop music.

Chinese rappers often explore China’s social and political issues and spread Chinese culture to the world via their music. Take Zhou Yan (stage name “GAI”), the champion of the first season of “The Rap of China,” who writes rap music on topics such as the Great Wall, the Yangtze River and the Yellow River. Rappers from different cities will also usually use their unique dialects to showcase regional culture. Rap songs that showcase the Sichuan and Chongqing dialects, such as “Hot Pot Soup Base” and “The Boss,” are incredibly popular.

Hip-hop quickly became an advertising medium of choice for many Chinese brands, such as the smartphone company Xiaomi and the beverage company Nongfu Spring. Rappers were hired to write rap songs to advertise these companies’ products, emphasizing product quality with catchy beats and rhyme. These advertisements soon gained widespread approval from both brand owners and viewers. Such campaigns were highly successful, and companies quickly took note of their staggering click-count increase.

In addition to advertisers, the Chinese Communist Party has also played a big role in fueling the rise of rap commercials. These commercials, known as “Red Rap” in China, promote patriotism and loyalty to the CCP. For example, a rap music video issued by People’s Daily in May 2017 celebrated China’s Belt and Road Initiative and promoted core socialist values. Moreover, the Communist Youth League created a rap called “Marx is a Post-90,” which portrayed Karl Marx as someone who really “gets” millennials. As the rap lyrics state, “I don’t read magazines, I read Marx and I was born in the 1990s. I am your Bruno Mars, but you are my Venus, my dear Marx.”

Rap today is used to promote positive values as defined by the state, but views toward rap are not always so positive. Rappers who glorify what Beijing considers to be unpalatable aspects of society will also receive heavy censure. For example, PG One, one of the co-champions of “The Rap of China,” was forced by the Communist Youth League to apologize for his latest hit single, “Christmas Eve,” because the song’s lyrics glorify drug culture and insult women. Furthermore, PG One’s performance as part of a “The Rap of China” tour stop in Changsha in January 2018 was canceled due to force majeure. Before this, he was involved in a scandal with a married actress that caused a huge outcry on social media. The more PG One’s fans defended him, the more others looked down upon PG One and rap in general.

On January 19, 2018, Gao Changli, publicity director at the State Administration of Press, Publication, Radio, Film and Television of the People’s Republic of China, outlined “Four Don’ts” that must be upheld when content is aired on Chinese television. Two of them, in particular, were widely seen as specifically targeting rappers: “Do not use those whose morality is ignoble, tasteless, vulgar and obscene,” and “Do not use those who have stains, scandals and problematic moral integrity.” After that, Chinese news outlet Sina announced that the ban specifically prohibits featuring actors with tattoos; but in China’s entertainment industry, rappers are the biggest tattooed group.

Hip-hop is a relatively new phenomenon in Chinese music and has not always been accepted by the public. Most Chinese people, especially elders, see hip-hop music as glorifying drugs, sex and violence, and this has caused many parents to ban their children from listening to hip-hop. However, as participants on “Rap of China” have composed music with themes like cherishing family and friendship, recalling childhood and striving for dreams, the public has developed fresh and positive impressions of hip-hop. In addition, rappers have gained fame and fortune from the success of the TV show and the hip-hop market has boomed as visionary entertainers have seized the opportunity to capitalize on this growing industry. The catchphrase, “Do you have freestyle?”, has also awakened a hidden passion for rap music among Chinese youth,and “Red Rap” has helped the genre earn the approval of parents and government alike. Changes in the entertainment industry from 2000 to the present have paved the way for today’s rap craze, and this enthusiasm will only continue to heat up in the future.

Previous post Why disease outbreaks are an international security issue

Next post The Greek crisis is far from over: Three things to look for in 2019
sgrosve2