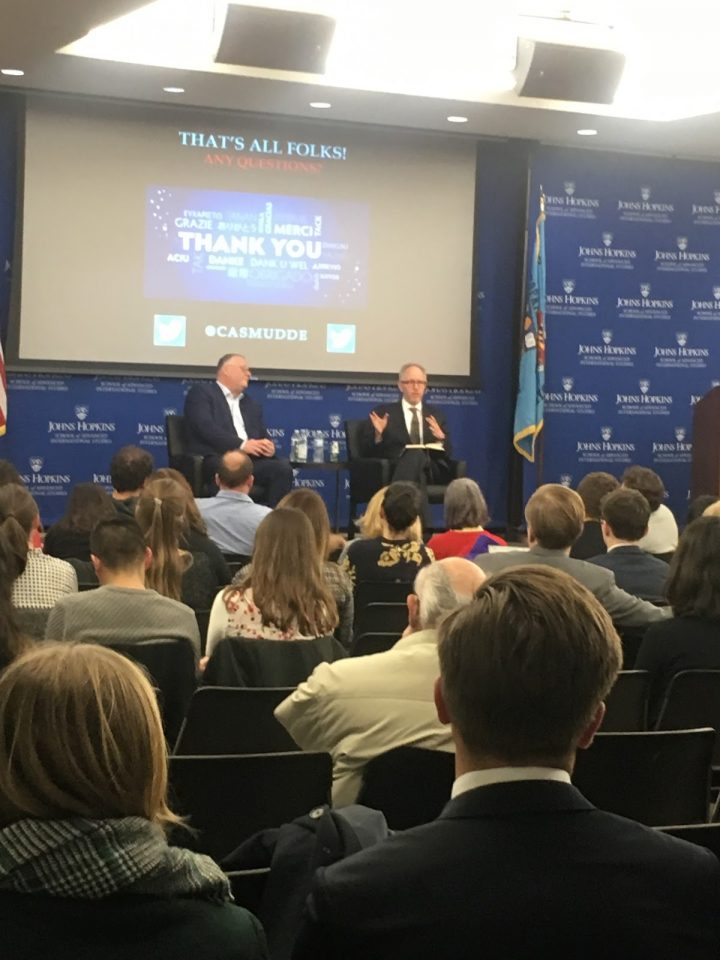 Mudde is a leading scholar on political extremism and has published five books about populism in Europe, particularly with regard to extreme right-wing parties. He is currently a professor at the University of Georgia and the co-founder of the European Consortium for Political Research Standing Group on Extremism and Democracy.

It was fitting that Mudde delivered his lecture about the love-hate relationship that society has with populism on Valentine’s Day. People love to talk about populism but hate that it is establishing footholds across the globe. Media outlets report on populism as often as other political movements, even though it is only capturing an average of 25 percent of the vote in Europe.

Mudde began the lecture by introducing his often-cited definition of populism and highlighting its key implications. Mudde defines populism as “an ideology that considers society to be ultimately separated into two homogenous and antagonistic groups: ‘the pure people’ and ‘the corrupt elite,’” and argues that politics should be an expression of the “volonté générale” (general will) of the people.

The first implication for Mudde is that populism is a “thin-centered ideology,” meaning that it does not determine policy goals without being tethered to a host ideology (e.g. nativism).

Secondly, “homogenous and antagonistic groups” are based fundamentally in monism and moralism. Monism sees people as one unit with shared interests and values rather than accepting a plurality of values. Moralism creates the fundamental distinction between the ‘pure group’ and the ‘corrupt elite’ who have objectively wrong values. Mudde later expanded on this point in saying that people are only populist in opposition. Once they are in power, they can invent a new elite, which becomes dangerous when liberal democratic response is weak. He believes this is the current case in Europe vis-à-vis Hungary.

The third implication, according to Mudde, is that the “general will of the people” demonstrates that populism is pro-democracy but anti-liberal democracy. Given the belief in homogeneity, populism has a fundamental problem with liberal protections because they create delineations among “the people” (e.g. along lines of race, gender, heritage etc.). In the eyes of populists, these delineations do not exist.

After detailing the key implications of his definition of populism, Mudde explained that populism in Europe is an illiberal response to undemocratic decision-making. He claimed that politicians made decisions that were “democratic in process but undemocratic in spirit.” He used the example of European integration, arguing that state representatives joined the EU without the support of their constituents.

Monumental decisions like these have drawn increased scrutiny during a time of heightened “cognitive mobilization.” Populism is a response to this undemocratic liberalism, positioning itself as a new movement capable of responding to the negative backlash from decisions such as European integration.

Professor Mudde concluded that the means to defeat populism lies in a re-politicization of politics. Doing so requires more fora through which “the people” can have open, ideological debates. Everyone, not just populists, speaks of “the people” in a homogenous sense but everyone knows that societies have infinite gradations in opinion. Politicians, in proposing policies, must explain convincingly why they support those policies and allow a conversation between different points of view to unfold.

“If you believe well-informed people will make the wrong choice, then you have the wrong system.”