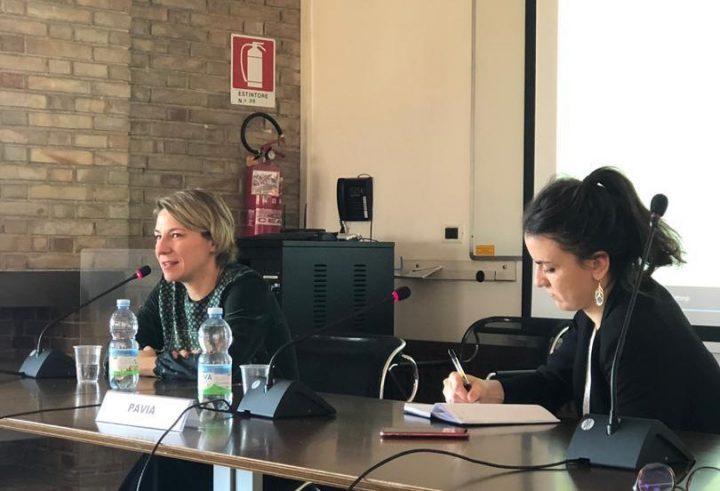 BOLOGNA, Italy — On February 18, Marta Serafini, a foreign correspondent for Corriere della Sera, came to SAIS Europe to speak with students about her work, the challenges of reporting in the Middle East, the changing media landscape and financial pressures facing news organizations and her experience as a female journalist in an intense and scrutinizing media landscape. Serafini, who studied international relations at the University of Bologna, focuses her work on terrorism and the use of social media for propaganda purposes.

In 2013, Serafini traveled for the first time to Syria in the second year of the war, reporting from the opposition territory which was under ISIS scrutiny. Spending a night in a refugee camp under the control of the Free Syrian Army, she spoke with men who were scared of being recruited into ISIS, a reality that they faced daily. She also spoke with women and children who had experienced sexual and physical violence at the hands of the Syrian forces. When she returned to Italy and gave her story to her editors, it appeared in the digital edition, but not in print. Although she was disappointed, she understood their reasoning. But, she stressed that in everything, “if you are a woman, you have to do more.”

Prior to working at the foreign affairs desk, Serafini covered Italian politics, including the rise of the Five Star Movement. Last summer, she covered the decision by the government to deny migrants coming by boat across the Mediterranean the right to disembark in Italy. Serafini underscored the importance  of understanding situations from all angles, particularly what is happening behind the scenes, when trying to write a story. She also addressed the difficulty of a journalist to rely solely on observation, especially when addressing sensitive issues with sources who could be in danger, including victims of domestic violence, refugees and protestors. When working with these sources, Serafini stressed that “you must always use your conscience” and that “the way you write must be more neutral, [it is] not necessarily right to be impactful” by inserting your opinion or feelings about the situation.

One of the most challenging times for Serafini to maintain her neutrality was for her story on Maria Giulia “Fatima” Sergio, an Italian student who left Italy to become a foreign fighter for ISIS in 2015, and which later became a book. Serafini first contacted her by Skype, curious to see if she would submit to an interview and was surprised when she agreed. Although initially Sergio wanted information about her parents from Serafini, their conversations eventually grew to the point where Sergio recounted her story of going to Syria to fight for ISIS. Serafini discussed the importance of maintaining balance, stopping Sergio when her propaganda tactics would leak into the conversation. She stressed that her role as a journalist was “not to judge or save her, just to tell her story.”

Serafini says that “new media,” such as podcasts and using social media to aid in the reporting process, are some of the most exciting parts of the job. For example, when reporting on the refugee boat crisis last summer, she was able to capture a scene on her smartphone and send it to her news desk immediately. They were able to upload it as a story in less than three hours. She admits that Corriere della Sera is still catching up with other organizations in using these tools but is hopeful for the future of journalism as these means allow news outlets to reach new audiences, like The New York Times’ wildly successful podcast “Caliphate.” Serafini ended her talk by encouraging SAIS students who want to be journalists to keep pushing and to follow the truth, wherever that may be. She said the vital work of foreign correspondents in the far-flung corners of the world is more important than ever, helping to bring stories on war, political conflict and humanitarian crises to our attention.