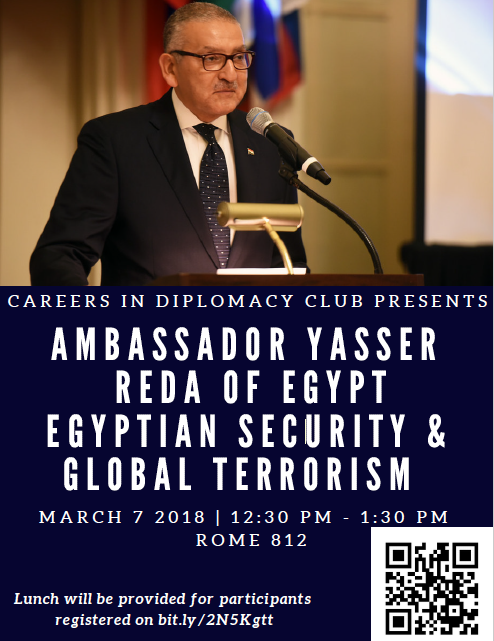 WASHINGTON — On March 7, the SAIS Careers in Diplomacy Club will be hosting Egypt’s  ambassador to the U.S. Yasser Reda for a luncheon and discussion on Egyptian security and global terrorism. According to his biography from the Egyptian embassy, Amb. Reda is a 33-year veteran of Egypt’s diplomatic corps who has served in China, Cyprus, Iraq and Italy and speaks fluent English, French and Arabic. Among his more notable tours, Amb. Reda was deputy chief of mission in Berlin in 2004 and later was Egypt’s ambassador to Israel, a post he held from 2008 to 2012. Ambassador Reda’s experience is not limited to foreign service. He also served two separate, non-consecutive terms as assistant minister of Foreign Affairs and chief of the Cabinet of Egypt — once from 2006 to 2008, and again from 2013 to 2015. After his second term, Amb. Reda was appointed to his current post as ambassador to the United States in September 2015.

During his time as ambassador, Ambassador Reda has been an integral part of Egyptian-American relations. After a two-year hiatus on the dispension of American military aid to Egypt under President Obama, the Trump administration not only repeatedly welcomed Egyptian President Abdel Fattah el-Sisi, but also took a much softer line on Egyptian-American relations than his predecessor. Ambassador Reda is on the record as confirming meetings between the two leaders as having been “constructive” and has said that President el-Sisi’s tenure as president has done much to improve Egypt domestically and increase trade with the United States.

Since President el-Sisi won his April 2018 election with 97 percent of the vote, Amb. Reda has continued to serve and defend his government here in Washington. In response to critics of President el-Sisi who claim that economic reforms and alleged political crackdowns have deeply impacted the president’s popularity, Amb. Reda has reaffirmed Egyptian commitment to judicial independence and rule of law. He points out that both are critical for a functioning democracy and is quick to laud Egyptian efforts to protect these rights in a region “otherwise fraught with turmoil.” With the ramifications of the 2011 Arab Spring still echoing across the region, conversations with diplomats like Amb. Reda provide critical insights into Middle Eastern politics and policy. To attend the SAIS Careers in Diplomacy Club event with Amb. Reda, please use the Eventbrite link here.

Next post Europe struggles for consensus on Venezuela
sgrosve2