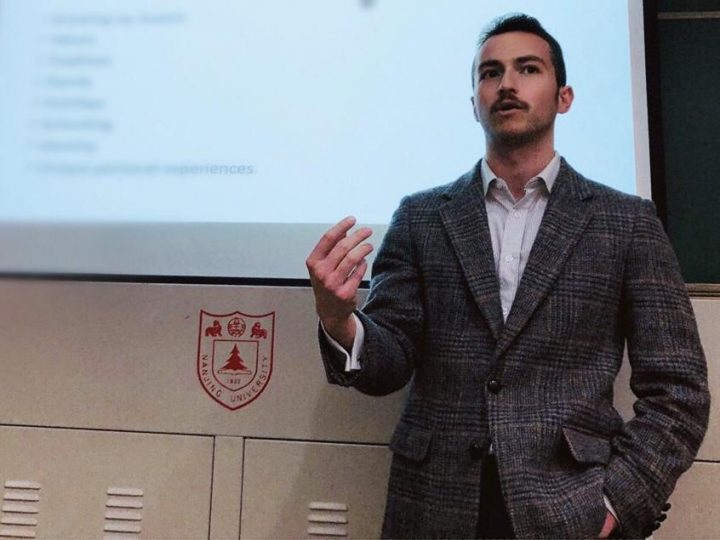 NANJING, China — On Christmas Day, at the invitation of the director of China’s National Institute for Jewish Studies, my Hopkins-Nanjing Center classmate Benjamin Miles and I discussed the Jewish American experience with an audience of 200 students at Nanjing University. During the two-hour talk, we first outlined the history of Jews in America, discussing various waves of immigration and what made each group unique. We shared personal insights on Jewish youth culture and identity, comparing regional and international divergences, which included a comparison of New York and Los Angeles, as well as the United States and Israel. The audience was highly engaged and particularly interested in understanding the roots of anti-Semitism in the West, as well as Jewish perceptions of China. For most people in the audience, this was their first time meeting Jewish people their own age.

Nanjing University is unique amongst Chinese universities in that the school houses a research institute dedicated to Jewish studies — one of the first of its kind to open in China. It was founded just four months after the establishment of diplomatic relations between China and Israel in 1992. Since then, about a dozen similar institutes have opened across China, in far-flung locations such as Yunnan, Henan and Heilongjiang provinces.

But the emergence of Jewish studies in China goes back to the early 1980s. As China began experimenting with economic and social reforms, and as more Chinese students set out to study abroad, Chinese people came face-to-face with more Jews than ever before. What they encountered was a “Jewish people” who strongly valued family, their ancient history, and the pursuit of professional achievement – not unlike the Chinese themselves.

Interest in Jewish studies in China has spread for various reasons. One reason is the necessity for Chinese businesspeople and policymakers to understand Israel, a self-proclaimed “Jewish state” with a population that is three-quarters Jewish. Economic synergy between the two countries has never been stronger, with bilateral trade growing from $50 million in 1992 to over $13 billion as of 2017. China is Israel’s largest trading partner in East Asia and China invests billions of dollars a year in Israeli tech firms.

Another explanation for the rise in Jewish studies in China deals with complex questions of identity. Following our guest lecture at Nanjing University, multiple students privately expressed to me that Chinese people strongly envy the Jewish people because they are a “successful” ethnic group. They referred to the wide representation of Jews holding leadership positions in various industries, from Wall Street to Silicon Valley, and from Hollywood studios to centers of medical research. When a group of people that accounts for less than 0.02 percent of the world population is awarded 22 percent of all Nobel Prizes to date, the word “successful” tends to get thrown around. But who is a “Jew?”

While Israel has been called the “homeland of the Jewish people,” it is not Israeli nationalism that unites global Jewry in the 21st century, but instead the sacred religious texts, passed down from generations, which shapes the notion of a common Jewish heritage. Judaism as an ethno-religion is categorically distinct from the ethno-nationalism that shapes identity in modern China. While mainstream society is dominated by the majority Han ethnic group, Chinese people are composed of a total of 56 ethnicities, who are bound not by a sense of shared religious heritage, but instead to the concept of Chinese nationalism as propagated by the Communist Party. For the Chinese, to desire to be a “successful ethnic group like the Jews” is to raise complex questions of identity. What does it mean to be Chinese in the 21st century?

In recent years, many bestselling business guides in China have sought to decode the Jewish people, instructing the Chinese how to emulate the best practices of Jewish businesspeople to succeed in negotiation, develop corporate strategies and provide advice on money management. These texts reinforce stereotypes of Jews that have traditionally been found in Western countries. Chinese writers tend to stereotype Jews in a positive light, holding Jews up as a people who the Chinese should strive to emulate.

As anti-Semitism continues to resurface in the West, more Jews may begin to look east to countries that have traditionally lacked a culture of anti-Semitism as places to study abroad, work or even settle down. Already, cities such as Shanghai and Harbin have opened Jewish history museums, appealing to Jewish tourists seeking to better understand the history of their people in China. Synagogues are tolerated in multiple Chinese cities, and China-Israel relations have only grown more robust. And for the 200 students who attended our guest lecture, they can bet this wasn’t their last interaction with Jews of their generation.

Jesse Adler is a HNC Certificate ‘19/SAIS M.A. ‘20 student currently completing his Certificate at the Hopkins-Nanjing Center before starting at SAIS DC next fall.

Next post The Good, the Bad, and the Ugly: The INF Treaty withdrawal
sgrosve2