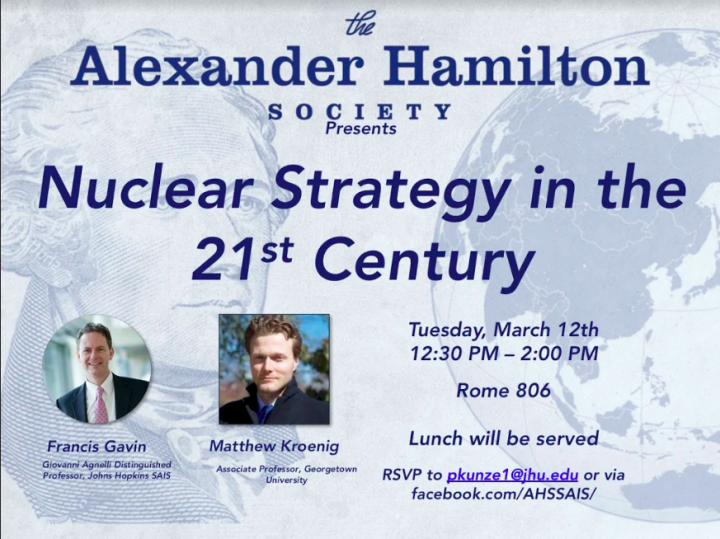 WASHINGTON — The Alexander Hamilton Society will be hosting a lecture on Tuesday, March 12 with Dr. Francis Gavin and Dr. Matthew Kroenig. The two scholars will be discussing modern nuclear strategy, a remarkably timely topic given recent negotiations between the Trump administration and North Korea. Moreover, both have recently published on the changing nature of nuclear strategy: Dr. Gavin’s most recent article is available in Texas National Security Review, and Dr. Kroenig’s newest book, “The Logic of American Nuclear Strategy,” is available through Oxford University Press. Their works call into question the prevailing logic of nuclear strategy in policy circles and demand that we revisit our approach to nuclear strategy as a piece of a larger American foreign policy framework.

Prior to his current post as the Giovanni Agnelli Distinguished Professor and the inaugural director of the Henry A. Kissinger Center for Global Affairs at SAIS, Dr. Francis Gavin was the first Frank Stanton Chair in Nuclear Security Policy Studies and worked as a professor of political science at MIT. Even in 2014, Gavin was convinced that the United States was in a “renaissance of nuclear studies,” and argued that a more deliberate analysis of existing doctrine would help policymakers make better policy decisions. Since his appointment to the Kissinger Center, Dr. Gavin has formulated a curriculum in conjunction with SAIS meant to critically examine the history of foreign policy. The Kissinger Seminar Series is the Center’s academic flagship, and it features Dr. Gavin as well as Professor James Steinberg of Syracuse University and Professor Hal Brands of SAIS, who is also a senior fellow at the Center for Strategic and Budgetary Assessments (CSBA).

Dr. Gavin’s most recent article on American nuclear strategy, “Rethinking the Bomb: Nuclear Weapons and American Grand Strategy,” confronts some of the tough questions that have arisen from our development and treatment of nuclear weapons. Notably, Dr. Gavin says that we really don’t know as much as we should about how nuclear weapons shape American politics, and more importantly, that this lack of knowledge is predicated on “steep methodological, linguistic and normative barriers to understanding nuclear strategy and statecraft.” Not only are we plagued with incomplete histories of nuclear decision-making, we also must incorporate seemingly disparate policy approaches to nuclear weapons into our larger American grand strategy. Dr. Gavin argues that these faulty understandings of our own past with nuclear weapons can also problematically influence the future of nuclear policymaking, and points to four key trends that are currently shaping the nuclear policy environment.

First, he points to shifts in the geopolitical structure of the world order, saying that revisionist powers like Russia and China are currently actively influencing how the United States conceptualizes nuclear power and nuclear weapons in the world. Second, there are significant shifts in technology development that have and will continue to dramatically influence how we engineer and defend against nuclear weapons. Most notably, Dr. Gavin argues that these technological developments have eliminated the previous “binary” associated with nuclear weapons — the “haves” or “have nots” of nuclear states are now more faithfully painted in shades of gray. Nuclear arsenals are not only more sophisticated than ever before, they are also more vulnerable. This expansive treatment of nuclear weapons development is certainly something to consider for strategists and policymakers alike moving forward. Third, Dr. Gavin notes that recent trends in public opinion toward denuclearization are likely to impact how America treats its own arsenal as well as those of other nuclear states. Finally, the consistent degradation of deterrent threat credibility is also a critical factor for policymakers. Dr. Gavin is quick to point out that the use of nuclear weapons becoming “increasingly unthinkable is obviously a good thing,” but mentions that this trend highlights a tension between American Cold War-style deterrence strategy and its more modern incarnations.

The common thread for Dr. Gavin is the need for academics and policymakers alike to interrogate what it means to develop nuclear weapons and the policies that govern them. His research leaves us with more questions than answers on the future of nuclear policy, but his willingness to eschew complacency in nuclear strategy in favor of dissecting complicated policy problems is certainly something to look forward to in the upcoming lecture.

Dr. Matthew Kroenig is an associate professor in the Department of Government and the Edmund A. Walsh School of Foreign Service at Georgetown University. He is also the deputy director for strategy in the Scowcroft Center for Strategy and Security at the Atlantic Council, and has previously been a fellow at the Council of Foreign Relations, Harvard University, University of California and Stanford University. His most recent book, “The Logic of American Nuclear Strategy,” addresses the complex position that superiority of capabilities has held in the American nuclear strategy lexicon. Dr. Kroenig argues that leaders like President John F. Kennedy and Soviet Premier Nikita Khrushchev placed great importance in cultivating the appearance of nuclear superiority and that their policies were noticeably impacted by this perception. He powerfully points to why world leaders are drawn to nuclear superiority over the concept of nuclear parity, stating that nuclear superiority gives leaders flexibility in escalation and also allows them to run risks in crises that would otherwise be inaccessible. In essence, Dr. Kroenig pinpoints nuclear superiority as a key to nuclear policy flexibility.

Central to Dr. Kroenig’s argument is his development of “superiority-brinkmanship synthesis theory,” which he says explains why states seek nuclear advantages and why those advantages are ultimately beneficial. The military advantages of nuclear weapons provide states with more leverage over their adversaries and introduce greater flexibility of risk-taking for states in a crisis. Conversely, those states without a nuclear military advantage lack political and strategic leverage and are also more likely to experience higher costs of nuclear confrontation. This is significant — Dr. Kroenig says that there are, in fact, meaningful differences in the conduct of nuclear war and that nuclear-superior powers are less likely to experience these more negative ramifications.

Moreover, Dr. Kroenig complicates the traditional understanding that more nuclear weapons — a natural consequence of the competition for nuclear superiority — heightens the overall risk of nuclear war by promoting  instability in the international system. Instability, according to Dr. Kroenig, is overly simplified: Many theorists fail to differentiate between “bad” instability that can trigger nuclear war and “good” instability that can work in favor of American interests. Dr. Kroenig’s research indicates that there is little to no evidence that American nuclear superiority has created a dangerous level of instability in the international system. Furthermore, there is no evidence that international proliferation or nonproliferation goals are entirely incompatible with the maintenance of a strong American nuclear posture. Dr. Kroenig uses a case study on the Iranian nuclear program and JCPOA to point out that American nuclear arsenals ultimately had little to no effect on Iranian decision-making in this regard, and eventually turns to quantitative analysis to show that the size of the American nuclear arsenal is not a statistically-significant determinant of the proliferation or nonproliferation activity of other states.

Like Dr. Gavin’s research, Dr. Kroenig tries to bridge the gap between rigorous scholarship on nuclear strategy and meaningful policy. While their approaches are vastly different, both scholars ask us to question existing norms in nuclear policymaking and seek to improve our understanding of our force postures in order to create better policy.

For those unable to attend the Alexander Hamilton Society event on March 12, the Politics and Prose Bookstore will also be hosting both speakers on the same topic on March 10, 2019 at 1:00 p.m.. To RSVP for the SAIS event, please send an email to pkunze1@jhu.edu.