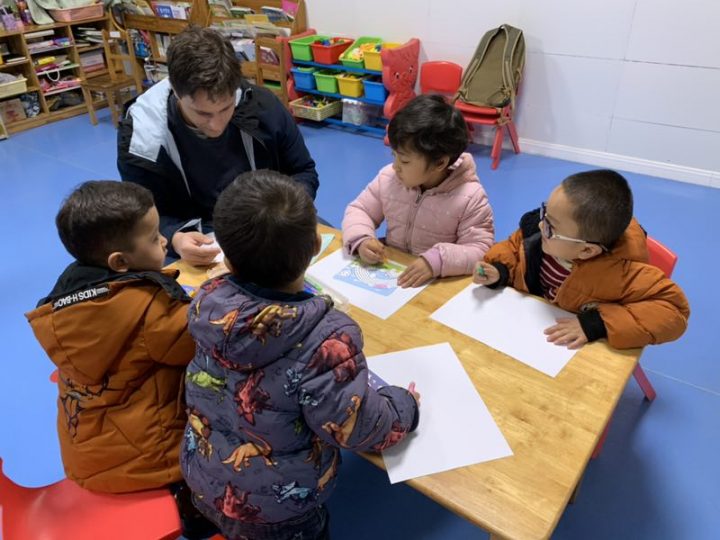 NANJING, China —On an overcast spring day reminiscent of Nanjing’s winter weather, I emerged from the Jiangwang Miao metro station to find many curious and bewildered faces. Unlike the streets of downtown Nanjing, which are frequented by foreign students, the residents of this community weren’t used to seeing a “laowai” or “foreigner” wandering around their neighborhood. This particular excursion was to a small, privately-run school for autistic children, whose name I have omitted to protect the privacy of the students.

I had been invited to participate in this day of service by the Nanjing chapter of my alma mater’s alumni association, the University of Southern California Alumni Association. The event was organized by our chapter president, who has a personal connection to the school. We were given a tour of the wide range of facilities offered to its students in need and had a chance to interact with students by reciting the English alphabet and drawing pictures together. The school operates on a subsidy from the Chinese government and tuition is kept affordable for low-income families with children who have special needs.

During the tour, I learned that the school caters to students with a wide range of learning and mental disabilities, including autism. While classes for younger students usually comprise a mix of so-called “normal” and “special” kids, there is a higher concentration of “special” students in the upper grades. These terms were used specifically by the school; however, it was unclear if there was a wider differentiation between individual children’s disabilities. As the children progressed in their education, “normal” children tend to advance to regular primary schools, leaving the seriously handicapped children behind. When visiting a classroom of older children with severe disabilities, one of my fellow USC alumni was startled by one student who seemed to get uncomfortably close to her.

“You remind him of his mother,” our guide said. “She has a similar hairstyle to yours.” This particular child was non-verbal, yet the caregivers at the school seemed to be able to read the children’s minds. “He knows how to speak,” one caregiver said. “He just doesn’t want to.” These students were considered the “hopeless” ones by the staff at the school, as students as old as 24 still attended the school because of their disabilities. We continued our tour downstairs where we joined a group of younger children.

When we met with a class of younger children, they were finishing their lunches in the activity room. The children had just woken up from their naps and some seemed a little groggy. I sat down at a table to be greeted by several curious tykes. “Wow! You have blue eyes!” one curious student exclaimed.

“Was your bread good?” I asked one rambunctious boy, who shot back, “Nope!”

For the children’s activity time, my three companions and I proceeded to write the letters of the alphabet on a blackboard and teach the kids how to sing the ABCs. We took turns asking kids to name the letters we pointed to, but one particularly smart little one always knew all the answers. Some of the kids seemed distracted, but what particularly caught my interest was the diversity of the students.

There were three children in the class who looked somewhat different from the rest. The staff pointed out that they were from Xinjiang, a province in western China primarily populated by ethnic Uyghurs. These kids clearly stood out from the rest as they not only looked different, but would also occasionally speak their native language among themselves. Sometimes they even spoke Uyghur to me, perhaps in the hopes I would understand. Needless to say, the class, including myself, would respond in Mandarin and they quickly settled back into the lingua franca of the group.

This scene exemplified the state of special education in China to me. Whereas the U.S. offers Specialized Education Plans (SEPs) and individualized education programs that help parents and educators find methods and options that better fit each child’s needs, it seems that in China special education has a component of standardization. Even though this school boasted specialized rooms for one-on-one sessions with the kids, this case of Uyghur children being made to speak Mandarin was perhaps another manifestation of the requirements for sameness in China.

The class broke into smaller groups and we drew with the kids. My fellow volunteers and I switched tables every few minutes to mingle with all the children. As I jumped from table to table, I noticed that the kids had varying degrees of dexterity. Some were able to color neatly within the lines, while others colored in abstract shapes. There were some earnestly trying to recreate the alphabet, and others who just drew as they pleased. One kid drew exclusively outside the lines, to which an older staff member said, “You can’t draw like that! You should color within the lines!”

“Don’t worry,” I said to the child. “I think your drawing is great.” I felt that these kids needed encouragement, especially when it came to creativity and expressing themselves. In a society that can be as demanding as that of China, it is important for those who hold relatively little power to know that they have control over something. For the “special” students, it was important for me to reinforce the idea that they were fine the way they were. Perhaps this is the greatest challenge of special education in China — namely, that it struggles to find ways to play to each individual student’s strengths. Rather, it attempts to either normalize them or shut them out entirely.