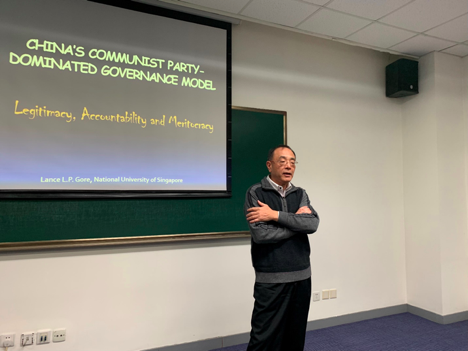 NANJING, China — Last week at the Hopkins-Nanjing Center, Dr. Lance L.P. Gore  presented research findings from his recent article, “China’s Governance Model: Legitimacy, Accountability, and Meritocracy,” in which he compares the Chinese government’s model to Western ideals of good governance. In his article, Dr. Gore explores the limits of China’s model of governance as well as gaps in the traditional model of good governance. Departing from what Dr. Gore refers to as the “holy trinity of development” — the World Bank’s 1994 call for capable public administration, democratic accountability and rule of law — Dr. Gore scrutinizes the Chinese governmental system and its achievements. For example, Gore points out that in the “voice and accountability index,” China ranks alongside so-called failed states such as Syria.

Yet China’s developmental outcomes seem positive, challenging the World Bank’s assertion that the “holy trinity” of good governance is a prerequisite to economic development. Moreover, while many democratic governments in possession of these important qualities are nonetheless suffering a crisis of faith among their people, the Chinese government seems to enjoy relatively high public approval.

Gore points out that while the Chinese government is not democratic in the electoral sense, it does have a sort of “connective tissue” which allows it to keep in touch with the populace. It oversees a series of grassroots party organizations that interact with every part of social life in China. “Jiguan” organizations are connected to local government, while “danwei” organizations are connected to business operations and social programs. In addition to these institutions, ideological indoctrination, which creates a “corporate identity” at higher levels of the party, as well as pressure from the political center, represent mechanisms of accountability. Moreover, unlike the typical Western model of governance, Gore argues that through college education requirements, cadre training programs and the ever-improving cadre responsibility system, the Chinese Communist Party (CCP) has successfully constructed a meritocracy.

Gore acknowledges some weaknesses of this system. For example, there is a tension between party leadership and the rule of law, and the above-mentioned mechanisms of popular accountability remain underdeveloped, meaning that corruption and losing touch with the masses remain an existential threat to party leadership. Additionally, Gore contends that party-building institutional reform conflates party and state bureaucracies, further weakening the function of the CCP as a bridge between the state and society.

Next post Have you been praised today?
The SAIS Observer Staff

By: JONIEL CHA Washington: How to respond to the threat of failing infrastructure in the United States? Have no fear,...