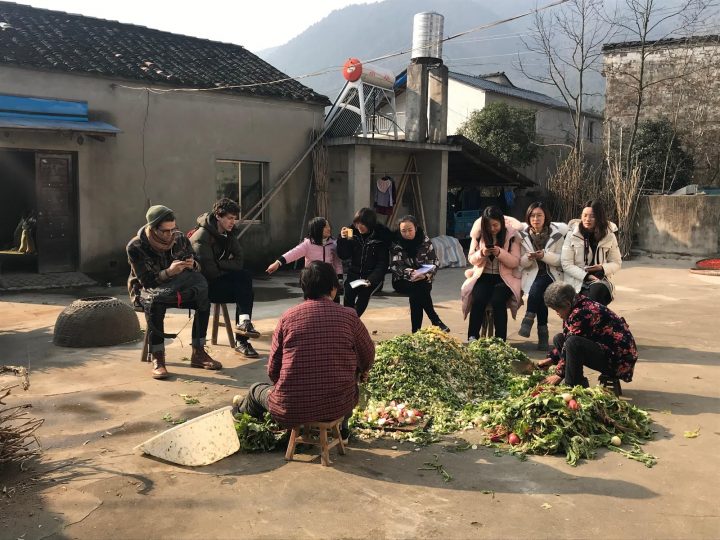 NANJING, China –– China’s economic rise over the past several decades is often symbolized by modern cities like Shanghai or Shenzhen, or the massive development of urban centers such as Chongqing. Foreign and domestic observers alike look to these cities and dozens of others as representative of the contemporary Chinese experience. However, an estimated 577 million people still live in China’s rural areas. No single story can sufficiently cover the human experiences of China’s development transformation, but gaining insight into the changes underway in the countryside is essential to understanding the greater trends occurring in Chinese society. Last semester, students at the Hopkins-Nanjing Center (HNC) travelled to Yunling village in southern Anhui province, three hours driving distance from Nanjing, to conduct individual research and see first-hand the changes occurring in rural communities.

The students were members of a class popular with Chinese and American students alike. The course, Politics of Rural Development, was taught by the current American co-director of the Hopkins-Nanjing Center, Adam Webb. The course combined a semester of theory and case studies looking at the sociological, anthropological and political factors of economic incorporation and development across the world. Ultimately, each student chose an element of rural life to focus on for their research project, ranging from topics as diverse as traditional burial practices to industrial development. According to Webb, “The field trip gives us an opportunity to dig more deeply into rural life in one place in China… [the students’] interviews and final papers add up to a multifaceted picture of the community’s circumstances and challenges.”

The trip was an immensely valuable experience for the Chinese students of the class. Although many of their parents grew up in the countryside, and some still had grandparents living in rural areas, all of the Chinese students have grown up in cities. Ashley Wei, a student whose parents migrated from the countryside, said she was “completely unaccustomed” to rural life. Another student, Li Xuan, said that to her it was a “whole different world.”

Beginning in the early 1980s, agricultural reforms enacted by the Chinese government fundamentally changed rural life. The reforms left the countryside with a large amount of surplus labor itching to find economic opportunities elsewhere. At the same time, the beginnings of China’s industrial boom, coupled with a relaxation of China’s rigid residential “hukou” registration system, drew these residents to the cities in search of work. This combination of push and pull factors resulted in a mass exodus from the countryside in pursuit of a better life. Over the course of the weekend, I could count on two hands the number of working-aged men I saw in the village. The village was seemingly hollowed out; the only time of year it would attain its full vibrancy would be the annual rite of passage home for Chinese New Year.

Most of our classmates’ research focused on the social effects of this migration, particularly on the so-called “left-behind” children and elderly. Alex Hardin, an HNC Certificate/SAIS M.A. student, surveyed how labor migration has affected perceptions of the village’s future among its inhabitants. To Hardin, “there was this sense that villages would continue to develop…but it wasn’t because the village is on its own, developing internally.” Instead, there was a feeling that rural China’s way of life is undergoing inevitable and irreversible change “not something that the village can control, but rather is dependent on these outside factors.” Of course, this outside development has allowed migrant workers to receive an income far greater than they could ever receive in the countryside. Indeed, many homes in the village were recently constructed after families acquired enough money through migrant labor. However, the future of rural communities without any form of sustainable local development is ultimately in question.

Central authorities have also recognized this trend and, in an attempt to provide greater self-sufficiency to rural communities, have aggressively pursued a rural revitalization strategy, coupled with a continued poverty alleviation campaign. Rural revitalization is one of the key components of the “New Vision of Development and Developing a Modernized Economy”, released by the Chinese Communist Party’s National Congress in 2017. Finding ways to develop the countryside and reduce urban migration is seen as essential for greater social stability and balanced development. The poverty alleviation campaign is an even more ambitious government initiative, based on the 2011 Ten-Year Poverty Reduction program set to expire in 2020. The ultimate goal of the program is to lift all residents of China above the poverty line, defined as an annual per-capita income of 2,300 RMB (US$342).

One Chinese HNC Certificate student focused her research on rural tourism, a highly touted element of the rural revitalization strategy. In Jing County, where Yunling is located, a variety of tourist sites highlighting the area’s connection to People’s Liberation Army units and Chinese Civil War battles have sprung up, including one directly next to the village. However, she found that although these sites have promised to employ local residents, very few people have received a job. Instead the primary source of personal income is subsidies from the government that amount to a total just above the poverty line. To her, it seemed that “the government only cares about the ambitious goal it has set for 2020 and the number of people in absolute poverty it can lift up.”

It is expected that in 2020 the Chinese government will declare victory over poverty in China, and officials in the near future will continue to promote self-sustainability in rural communities, but travelling to Yunling showed that the current reality and future trajectory of the Chinese countryside are less clear. For the time being, it seems certain that rural communities will continue to rely on migrant workers and outside development to indirectly sustain their livelihoods. Not fundamentally different from conversations occurring in the United States about economic transition, one is left to wonder if any government policy effort to counteract these social trends will ultimately be fruitful.

Ryan Lucas is a current B.A./M.A. student at the Johns Hopkins Krieger School of Arts and Sciences and SAIS. He is completing a certificate at the Hopkins-Nanjing Center before starting at SAIS DC in the fall of 2019.