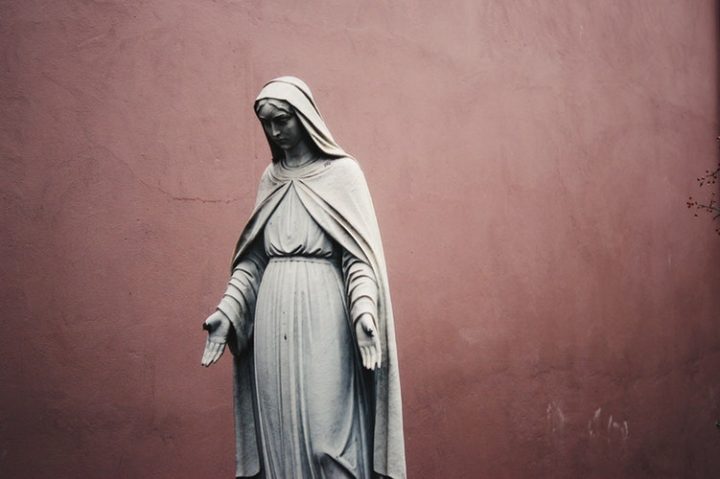 NANJING, China — A father stands in front of his congregation, breaking the ceremonial eucharist wafers symbolic of the body of Christ. An altar boy clad in white vestments swings a thurible, filling the air with a cloud of fragrant incense. Several congregants receive their eucharist host and quietly leave to beat the end-of-Mass rush. Moments like this can be seen in Easter Masses in Catholic churches worldwide, but there are some differences in this particular Nanjing church. Outside the Cathedral of the Immaculate Conception (圣母无染原罪始胎堂) sits a placard from the Nanjing Municipal Religious Affairs Office labeling the church a five-star institution — “a model place of worship.” A bulletin board outside the church extolls the 12 “Core Socialist Values” and labels the church as an honorary recipient of the 2016 Third National Committee for the Advancement of Harmonious Temples and Churches award. The board also lists “patriotic education” as the first and foremost responsibility of the church community.

Though government controls on religious practice have long been the norm, scenes like the one above are becoming increasingly common. “National Sovereignty of Religion” has been the guiding principle of the Chinese Communist Party (CCP) since the 1950s. In 2009, a document issued by the National Religious Affairs Committee (国家宗教事务局) outlined this principle succinctly: Chinese religious organizations are “to adhere to the principle of independence and sovereignty, and to resolutely oppose the infiltration of religion by foreign entities.”

Since the rise of the Xi Jinping government, the CCP has greatly expanded efforts to exert control over domestic religious practice. The Xi administration has considered the sinicization of religion official policy since 2017.  However, even Jesuit missionaries during the Ming dynasty sinicized certain Catholic practices for proselytizing inside China. In the 1950s, the new Chinese communist government emphasized sinicization to address its worries about the influence of foreign bishops in China. After all, Chinese bishops represented a communist-averse foreign government — one that had threatened to excommunicate any Italian Communist Party member during the 1948 Italian election — and many foreign clergy in China supported the KMT during the Chinese Civil War. Chinese cadres suspected that the Catholic Church was used by foreign powers to undermine Chinese sovereignty. From 1952 to 1956, the Chinese government expelled over 8,000 foreign clergy, leaving over 90 percent of Chinese bishoprics empty. Traditionally, Chinese-born Catholic clergy had been priests or deacons, but now the Chinese Patriotic Catholic Association (CPCA) has begun to appoint bishops to fill the vacancies.

This policy established a sinicized clergy in the Chinese Catholic Church — but led to a huge rift between Chinese Catholics and the Vatican. According to long-held Vatican law, only the Pope can appoint bishops, and investiture controversies have sparked wars in the past. This policy led to a conflict between Rome and Beijing, as popes began to appoint bishops in China’s underground churches without Beijing’s approval. In turn, Chinese officials imprisoned several appointed bishops and forced others to participate in bishop appointment ceremonies held by the CPCA. The Rome-Beijing relationship has only recently seen improvement, as September 2018 saw a deal struck between CCP and Vatican representatives regarding the shared appointment of Chinese bishops.

However, the tension t between the Catholic Church and Beijing is far from resolved. Under the Xi administration, the renewed sinicization campaign has seen the removal of over 1,500 church rooftop crosses in Fujian province alone. Even after signing this deal, Catholic temples, shrines, churches and places of pilgrimage that are not adequately sinicized face possible demolition. Strict government controls on other aspects of religious life are likely to continue exacerbating the tenuous nature of the Chinese government’s  relationship with both the Church and China’s Catholic population. These points of friction include policies limiting the number of children per couple, the heavy-handed suppression of underground church clergy, alleged forced sterilizations and abortions, and Chinese insistence that the Vatican abandon their nunciature in Taiwan.

The Catholic Church is not the only religion facing government-mandated sinicization — the Muslim Uyghur population in Xinjiang is perhaps the most pressing example, but Protestant Christians are also targets of this sinicization campaign. But the Catholic Church has a glaring difference: It is s a religious organization supervised by a foreign state with permanent observer status at the United Nations. As such, Chinese policy toward the Catholic Church holds both international and domestic implications. Meanwhile, Chinese policies toward Protestant and Muslim groups inside their borders are much less likely to have direct international implications, as they are unlikely to be part of a large centralized international entity.

The international responses to China’s policy toward the Catholic Church have been varied, but they invariably impact relations between China and other countries with Catholic populations. On June 17, 2018, thousands of Vietnamese protested the establishment of several Special Economic Zones (SEZs) along Vietnam’s coast. Among the earliest and fiercest opponents for the SEZs were Vietnamese Catholic clergy, who feared that closer relations with China would embolden the Vietnamese government to pursue harsher policies toward its own Catholic population. Strict Chinese policies toward Catholics might also influence China’s relations with countries in Sub-Saharan Africa — the region with the greatest growth in Catholic populations from 1965 to 2010. For instance, Zambia is a country whose Catholic population increased 108 percent from 1965 to 2010 that has a significant trade relationship with China, a politically-active bishops’ conference and a history of violence between Chinese copper mine bosses and their local Zambian miners. In such conditions, it is not outside the realm of possibility for a domestic Zambian Catholic response to growing Chinese influence to emerge.

How Chinese officials proceed regarding China’s religious policy will have profound effects on the Catholic Church worldwide. While many points of friction still exist between the Vatican and the government in Beijing, there is hope that the 2018 deal is the first step in the right direction. However, only time will tell if Chinese reconciliation with the Vatican will result in reconciliation with the Catholic world at large.