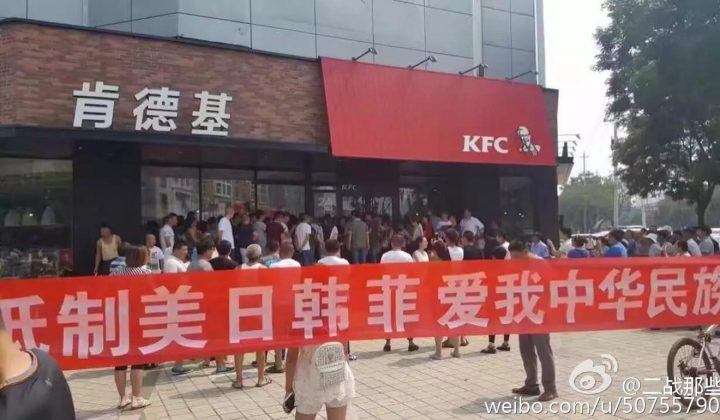 NANJING, China — China’s youth, often known to be fired up with patriotic zeal, are referred to in Chinese as the xiao fenhong, or “Little Pink.” The term can be traced back to the Jinjiang Literary City, an original love-story writing forum predominately frequented by female users that featured a pink background on its website. Over time, however, the term describing these young female writers has spread to include young Chinese nationalists of both genders.

Beginning with the surge in national pride leading up to the 2008 Beijing Summer Olympics, the “Little Pink” became known for discussing contentious political issues. Some group members sharply criticized netizens who posted negative news about China or comments glorifying Western countries. More recently, the group has focused on debating hot-button issues like the South China Sea dispute, the Taiwan election and air pollution in China.

Following the announcement of the South China Sea arbitration, some young nationalists quickly directed their anger towards other countries involved, including the United States, the Philippines, Japan and South Korea, even boycotting products imported from those countries. One group of “Little Pink” nationalists held a protest at a KFC storefront in Hebei province, calling for Chinese consumers to stop supporting the American chain’s business.

Such activism has been labeled “parochial patriotism” within China, although international disputes are often misinterpreted by the “Little Pink” as incidences of foreign antagonism against China, leading to extreme aggression on the part of Chinese citizens. This type of irrational nationalist behavior has been most pervasive in Sino-Japan relations, which has affected economic, political and even interpersonal exchanges between China and Japan, especially after 2010 when the captain of  a Chinese fishing boat was arrested by the Japanese coast guard.

Sometimes, online nationalists’ viewpoints are more extreme than those of the central government. For example, although has Beijing opposed Japanese leaders’ visit to the Yasukuni Shrine or the United States’ increased weapons sales to Taiwan, the public has responded even more radically. They have vandalized Japanese stores, smashed and burned Japanese cars, and also called for a hard-line foreign policy in Japan. The state intervened, calling for the angry masses to “be calm and rational.”

In recent cases, even celebrities have found themselves embroiled in these digital wars, including the 18-year-old Taipei-born actress and violoncellist Ouyang Nana. Due to speculation that one of Ouyang’s family members was involved in Taiwan’s independence movement, the star’s Instagram and Facebook accounts were flooded with demands for Ouyang to issue an apology. In response to the nationalist backlash from mainland China, Ouyang released a statement on the social media platform Sina Weibo, asserting that “It doesn’t matter if I’m from Hong Kong, Taiwan or Beijing… I am Chinese. I love my country.” This concession, however, angered Taiwanese netizens, who took to Facebook and accused her of selling out.

In mainland China, according to the People’s Daily Online Public Opinion Monitoring Center, a large number of the “Little Pink” have congregated around the official Weibo accounts of the Communist Youth League, forwarding and “liking” pro-China comments. Their influence is widespread; their non-violent ideas have been recognized by the official press, including People’s Daily and the Global Times.

Though “Little Pink” has been suspected to have been organized by state authorities, no evidence so far has proven that they are regulated in any way. Undeniably, applause from the government will attract more young internet users who believe they have a duty to defend China online. These young revolutionaries are called China’s 0 fen dang, or “0 cent army,” which evolved from the  “50 cent army” — the official name of internet commentators who were hired and paid by the government to produce and publish pro-CCP messages online, according to VOA news.

Furthermore, the “Little Pink” has adopted a less aggressive stance to distinguish themselves from older, angrier Chinese generation that has incited violence, especially against Japanese people. The “Little Pink” are more liberal and globally-oriented than the older generation, organizing or joining a series of mass campaigns on overseas social media platforms such as Facebook, Instagram and Twitter, which are all officially blocked within the mainland.

As millennials grow up, the “Little Pink” group has expanded to include both the post-1990 generation and millennials.The original “Little Pink” generation subscribes to a type of nationalism that differs from that of the traditional “angry youth” and younger millennials. The post-1990 generation has already reached working age, many with graduate or doctoral degrees and/or experience abroad. Their more mature and comprehensive understanding of foreign affairs allows them to have a more nuanced perspective towards problems regarding China’s development, but they continue to guard China against criticism from Western media.

Times are changing and millennials now dominate social media, effectively replacing the original “Little Pink” group which was headed by the post-90s generation. However, most of them are immature and easily stirred up by the media; many ultimately become radical jianpan xia, or “keyboard warriors.” The crucial question is, to what extent do these “keyboard warriors” stand behind what they advocate online? To the extreme, this online nationalism can be seen as ‘substituting’ Chinese patriotism in favor of blind promotion of China. Such nationalism has not contributed to liberalism; instead, it has undermined pragmatic policy proposals. In the words of one People’s Daily article, “Patriotism needs both passion and rationality. Neither blind resistance, reckless actions nor encroaching the bottom line of the law is the right way to guard our country.”

Jing Xuanlin is currently pursuing both an HNC certificate and a master’s degree focusing on international relations and world history from Nanjing University.

Next post Decades of devotions and friction: the Catholic Church and sinicization
sgrosve2