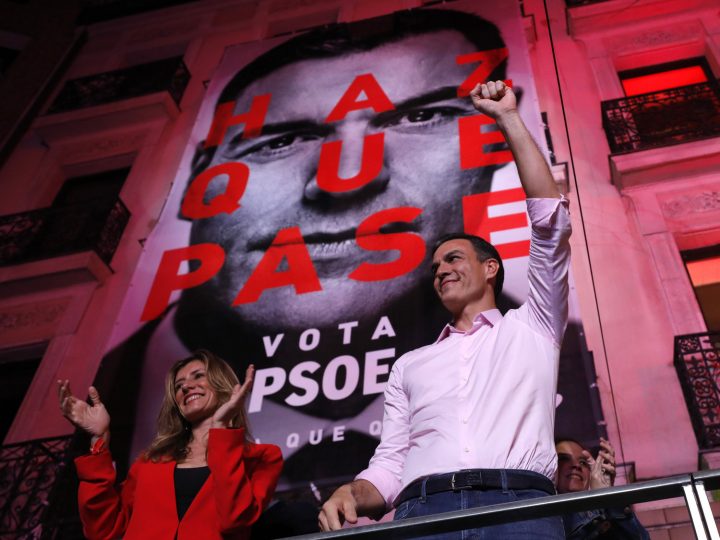 BOLOGNA, Italy — In a decisive victory in last Sunday’s elections, current Prime Minister Pedro Sánchez succeeded in bringing the Socialist Party (PSOE) their first governing victory in 11 years, making Spain one of the only European nations to be led by a leftist party, albeit with a fragile ruling coalition.

The call for a snap election by Sánchez’s government in February underscored the frustration that many Spaniards felt with the government and its inability to govern effectively. However, the electorate’s decision to give Sánchez’s party another chance can be seen as both a victory and a warning for the progressive movement in Spain, as Vox, the far-right movement, lost decisively but still gained seats for the first time since 1982.

The political division seen in this year’s elections is the result of many years of growing polarization and frustration among the Spanish electorate with their leaders. Both the right and the left capitalized on hot-button issues, such as women’s rights, immigration, gender violence and the autonomy of regional governments, helping to drive Spaniards to the polls with a turnout rate of 75.76 percent, the highest number since 2004.

Over the last few years, Spain has suffered increasing polarization stemming from the 2015 migration crisis, the 2017 Catalan separatist referendum and sustained levels of unemployment (which, according to Eurostat, sat at 13.9 percent in February, a dramatic shift from its peak of 26.3 percent in July 2013).

In addition, the high profile Gürtel case, the largest corruption case in Spain’s history, implicated many prominent PP leaders last year, driving their voters into the arms of Ciudadanos and Vox. Many former PP leaders, including leader Santiago Abascal, splintered off to form Vox, calling his former party the “derechito cobarde,” or the cowardly right.

This pressure pushed PP candidate Pablo Casado to take a more definitive stance on culture issues, such as abortion. His PP is more pro-market, pro-U.S. and tougher on regional nationalism than former PM Mariano Rajoy had been previously. But the lack of solidarity on the right contributed to a growing momentum for the Socialists.

This was an existential election for many Spaniards, who were faced with the threat of anti-democratic Vox party in a country that still struggles to reconcile a difficult past marked by a bloody civil war and a four decades-long fascist dictatorship. In fact, after winning, Sánchez declared that through this election, “the past has lost,” implying that no political party reminiscent of Franco’s rule would have a leading role in Spanish politics.

But despite his victory, Sánchez will lead a fragile coalition, bringing together Socialists, the far-left Podemos and moderates from the Basque and Catalan nationalist movements. Sánchez’s incoming government needs to focus on structural reform around pensions, education and labor markets and other issues that impact Spaniards on many levels. Sánchez’s decision to raise the minimum wage by 22 percent and give public sector workers a 2.5 percent pay rise upon entering office last year was already a strong step in this direction. If they continue to focus on these issues, they will garner more favor from a deeply polarized electorate and take away potential future momentum from the far-right populist threat.

Sánchez and the Socialists need to build a strong coalition, perhaps making some concessions in the process, to pass initiatives that will move Spain forward and provide an example for other similar European nations, such as Italy, Greece and France, who have seen their own challenge with far-right movements.

In a country that is still trying to rehabilitate from the deep impact of the 2008 financial crisis, the Socialists need to present a clear economic plan to continue focusing on improving the lives of Spaniards. But this election still represents a victory for a country that only transitioned to democracy some 50 years ago — perhaps the rejection of the far-right is a definitive statement that Spaniards want to make in an increasingly unstable European political landscape.

Olivia Magnanini is a SAIS MA ‘20 student from the U.S. concentrating in Latin American studies and minoring in international law.

Previous post Decades of devotions and friction: the Catholic Church and sinicization