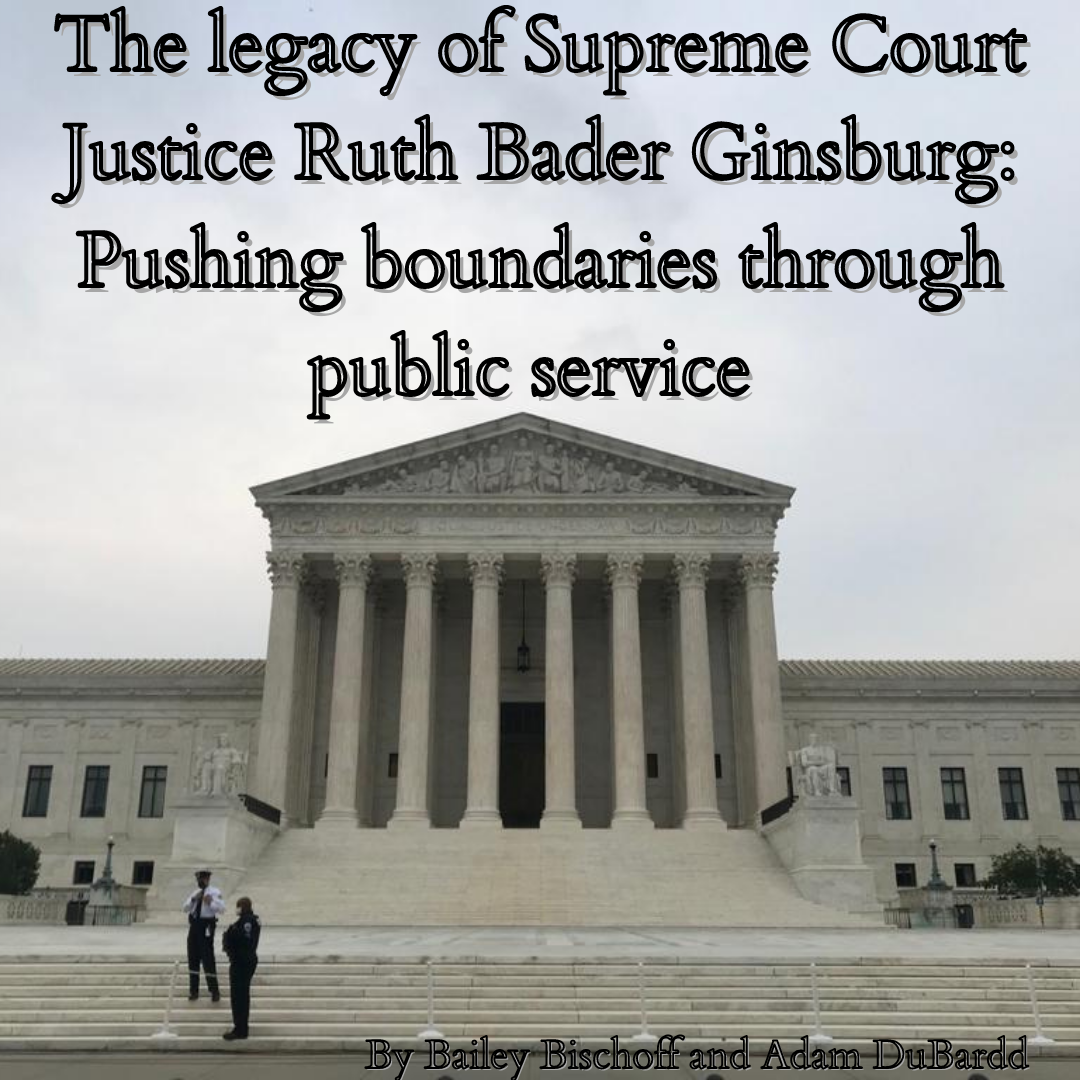 By Bailey Bischoff and Adam DuBard

The venerable Supreme Court Justice Ruth Bader Ginsburg passed away on Friday, September 18th, resulting in an outpouring of emotion across the United States. The impact of her life’s work and the vacant seat left in her absence is deeply felt by many Americans, especially those in the SAIS community. For many women, Justice Ginsburg is symbolic of the tangible progress toward equal rights one can make in a lifetime.

In addition to being the second woman to serve on the highest U.S. court, Justice Ginsburg’s career included professorships at Rutgers School of Law and Columbia University, as well as eight years as the Director of the Women’s Rights Project at the American Civil Liberties Union. She was appointed to the U.S. Court of Appeals for the District of Columbia in 1980, and the U.S. Supreme Court in 1993. During her career, through classes and court cases, Justice Ginsburg aimed to fight injustice by challenging the gender norms coded into our system of laws.

“There are many specific court cases involving Justice Ginsburg that have inspired me and probably shaped the direction of my own life, along with the women around me, giving us greater opportunity and choice than we would have otherwise,” says Edie Wilson, second-year IDEV student.

In addition to her fight to end gender discrimination, Justice Ginsburg’s expansive career includes many influential opinions and dissents. In recent years, many of her dissents were popularized by the public and as a result, she ascended to the status of pop culture icon. Released in 2018, the documentary RBG and feature film On the Basis of Sex showcased her instrumental work in the law. At one point, her workout regimen was even broadcast on late-night television.

What Justice Ginsburg came to represent, advancements for women’s rights, and a uniquely progressive seat on the Supreme Court bench, made her loss an emotionally impactful event for many. “Ruth Bader Ginsburg is an icon of both the feminist and civil rights movements, and to lose her was another blow to an already devastating year,” says second-year CM concentrator Corinne Bennett.

Many SAIS students have engaged in moments of reflection in front of the Supreme Court, which has served as a gathering place for those wishing to pay their respects and honor the memory of Justice Ginsburg. “People were crying,” says Bennett, “but also placing encouraging notes and signs highlighting Ruth Bader Ginsburg’s legacy and the impact she made.” Visitors laid candles, flowers, and memorabilia at the steps of the court.

Wilson, who went on a weekend run to the Supreme Court with a friend, describes the peacefulness of the setting. “It was a strange feeling to have standing in front of a building that’s decisions have determined the course of the country — that has shaken our world and redirected our futures.” Afterward, Wilson and her friend continued to reflect on Justice Ginsburg and those she influenced. “That Saturday morning run felt like a pilgrimage of sorts in honor of an inspirational woman.”

For some, Justice Ginsburg has been a lifelong inspiration. For others, it feels as though they are only now becoming fully aware of her impact. After reading an article about how influential Justice Ginsberg’s work was regarding the passing of the Equal Credit Opportunity Act of 1974, which barred discrimination in credit transactions, one SAIS student reflected on the many hard-fought rights that can easily be taken for granted. “When I got my credit card, I didn’t even stop to think if I needed anyone’s permission, except maybe my mom’s.”

Despite her many hard-fought victories, Justice Ginsburg’s passing leaves the future of the Supreme Court uncertain. “Initially, I was fearful about the potential loss of rights,” says Valerie Cariello. “But the more I think about how powerful her legacy is, the less I am fearful.” Even so, the fact remains that should the Republican-held Senate confirm President Trump’s pick of Amy Coney Barrett, the Supreme Court could be dominated by a 6-3 conservative majority for a generation.

There is no doubt that Justice Ginsburg’s death will significantly reshape the future of the Supreme Court, but her legacy is not without controversy. For example, Justice Ginsburg has been criticized for some of her actions during her tenure. Her criticism of Colin Kaepernick’s 2016 National Anthem protests, and the fact that she hired only one African-American clerk from 1993 to 2018 stand out in particular. Notably, her decision to not retire in 2014, which meant that the responsibility of naming her successor could be left to President Trump, may end up casting a shadow over her legacy.

In 2014, at the age of 80 and after surviving two different forms of cancer, Justice Ginsburg could have retired under a Democratic president accompanied by a Democrat-held Senate. This would have virtually guaranteed that she be succeeded by someone handpicked to continue to the incredible work she spent her life fighting for. This was also far from unthinkable at the time, as there were many calls for both her and Justice Stephen Breyer to retire while Democrats remained in control. It now appears that her decision to remain on the court might have put her life’s work at risk.

This paragraph from a 2014 Guardian opinion piece by Michael Cohen seems particularly prescient: “Then, if a Republican were to be elected president in 2016, they could put two conservatives judges in Ginsburg and Breyer’s place, as well as choose new judges to replace Antonin Scalia and Anthony Kennedy, should they step down. The result would be a virtually unbreakable conservative majority on the court for the next 20 to 30 years.”

Justice Ginsburg was a titan of the Supreme Court, where her work immeasurably improved the lives of millions of Americans — especially women. However, with the Supreme Court set to hear a case on the constitutionality of the Affordable Care Act in November, and numerous anti-abortion challenges from states in the works, many of the measures Justice Ginsberg helped implement are now at risk.

After lying in repose for two days at the Supreme Court, on Friday, September 25th Justice Ginsburg is the first woman, and the first Jewish-American, to lie in state in front of the U.S. Capitol. On the preceding Wednesday, her casket was greeted at the steps of the Supreme Court by the law clerks who had served under her. Solemnly dressed in black, they served as a visual reminder of the countless lives she had positively impacted during her career.

For many, Justice Ginsburg’s numerous successes in the fight to end gender discrimination through her work in the courts, which helped break down the barriers holding back so many Americans, serve to stress the importance of government. “For me,” says Bennett, “her legacy is a call to public service, to be actively involved in our institutions, and to continue fighting to ensure all people are treated equally.”

For many others, reflecting on Justice Ginsburg’s life and legacy inspires them with hope for the future. “I have the utmost confidence that powerful female lawyers, politicians, and leaders will fight for the maintenance of our rights as women,” says Cariello. “I know a lot of inspiring women at SAIS that I am confident will leave their mark on this world.”

Even so, while the public reflects on the accomplishments of Justice Ginsberg, there remains work to be done. Wilson notes the fact that “Justice Ginsburg, as the daughter of a first- and second-generation immigrant, and a wife and mother with a successful career, shows what should be possible for all women in the US if they so choose — professional success and personal fulfillment achieved through hard work. Unfortunately, I still don’t think this is a reality for many women throughout the U.S.”

Previous post Can language learning and cross-cultural exchange thrive virtually? Online learning at the HNC 外语学习与跨文化交流会在虚拟平台兴盛吗？中美中心的线上学习
Next post Amid a Historic Peace Deal, a People Forgotten
The SAIS Observer Staff