With the only two scheduled debates between sitting President Donald Trump and Democratic nominee Joe Biden already behind us, election day is fast approaching. The SAIS student body keeps a close eye on the 2020 election, so it comes as no surprise that so many reportedly watched the presidential debates. According to another SAIS Observer poll, 90.2% of SAIS students surveyed have watched at least one presidential debate, and 68.3% stayed tuned in for at least forty-five minutes. 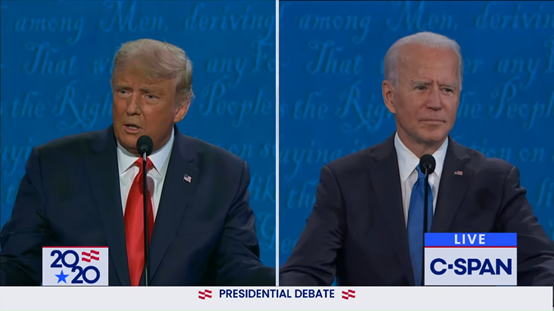 While most SAIS students agree that presidential debates are little more than a ritual, very few see the value of eliminating televised debates. Indeed, the contemporary debate structure is often criticized for its typical sensationalism or for serving as an ineffective medium through which voters might become better informed. However, many SAIS students believe that presidential debates continue to offer value — even in the digital age.

The televised presidential debate format emerged as a dominant political medium in the 1960s as a fresh way for candidates to hone their public image and speak directly to voters by reaching them in their living rooms. However, much has changed since then. In this social media age, it seems that shareable, easy-to-digest soundbites carry far more weight than more extended televised events — which demand your sustained attention. Instead of piecing together larger messages, candidates compete for space to deliver rehearsed bits and witty one-liners in hopes of trending online.

“If candidates are well-known, policy is honestly an afterthought. I think they can still sway some voters but last night [Debate of Oct. 9, 2020] just gave a platform for ad hominem attacks and conspiracy theories — 99% from one candidate. If that continues, the debates are not useful and should be adjusted to handle candidates who actively make up information and lie, because otherwise, it becomes a disinformation platform,” one commented. The 2020 presidential debates might also trigger voters to consider some critical questions: What do presidential debates mean in an age driven by social media? What purpose do they, or might they continue to serve?

The voters of the digital age have more access than ever before to a wide variety of reporting, criticism, interpretation, and even direct messaging on behalf of political candidates. Additionally, because the individual determines the level of engagement, enterprising voters are much more likely to self-educate on their own time than wait for something with scheduled commercial breaks. Most voters end up deciding which candidate to support before the first televised debate.

Still — nearly universal internet access and the predominance of social media is a double-edged sword. Despite unlimited access to an enormous variety of different perspectives, autonomous algorithms and consumption-based user-experiences often force individuals into online echo chambers. Social media platforms can further cultivate this state of isolation whenever users share their thoughts with friends, who often hold similar views.

It might be helpful to watch post-debate commentary or read about a debate the day after, but as one student pointed out, “coverage afterward never seems to capture the dynamic of the debate.” Watching a presidential debate might be an effective way for voters to check independently if they perceive politics through an information filter or whether they should reconsider their political positions.

While most admit that presidential debates have become less important in changing voters’ minds over time, some SAIS students believe that debates can still influence opinions, especially among undecided voters. Jenna Wichterman, a second-year Conflict Management concentrator, recalled an instance in which a friend regretted their early ballot picks after watching a subsequent debate. Christian Jacobson, a second-year Korean Studies concentrator, suggested that some voters might be turned off by their chosen candidate’s poor performance in the debates. Presidential debates could serve as a final check for voters, but how to improve them?

One might also consider the nature of formality as vital in itself. For example, some believe that a candidate’s debate readiness could indicate their willingness or ability to occupy public office. “Presidential debates can still be interesting to see how the candidates conduct themselves because you may know a candidate’s platform but have never seen them speak,” one commented. Debates are also valuable to voters that want to familiarize themselves with the personalities of different candidates. “I think this year the debates were particularly useful, especially the first one because as much as President Trump’s personality is reflected in short clips, seeing an unedited stream of his public pronouncements is something else altogether,” one remarked.

Still, according to other students, the entertainment value of televised debates should not be overlooked. Dawalola Shonibare, a second-year IDEV concentrator, offered a refreshingly honest perspective: “Before the debates started, I already knew who I would be voting for. Thus, I watched this year’s debates purely for entertainment value — to be able to understand the jokes and memes that would inevitably be created because of them. I take the outcome of this election very seriously, but the debates are a joke.” Another SAIS student put it succinctly: “debates are theater, but they’re necessary theater to keep politics in the public eye.”