NANJING, CHINA — Strange doctors on subways, an evacuation car ride through the countryside, quarantine on a military base, tears in Bangkok, and a normal train ride to Shanghai. This is a tale of four HNC students who had their lives and plans uprooted very early on in the COVID-19 pandemic, when they found themselves evacuated from Peace Corps service and Fulbright research in China. Within weeks of the evacuation, Sino-US political tensions ultimately brought these programs to an end.

I was a Peace Corps volunteer serving as a university teacher in Chongqing Municipality’s Fuling District at the end of January 2020, when I found out I was to be evacuated from China. Weeks earlier, during our inter-service training, we woke up to Marco Rubio doing a victory lap online over the end of Peace Corps China. Hours later, we were suddenly informed by strange men in suits from Washington D.C. that the program will be “graduated” because China is too developed for the Peace Corps. As a result, I was told to finish my service as planned in July 2021, and not to worry about COVID-19. Obviously, events progressed more rapidly than we ever imagined back then. Several days after Chinese New Year, headquarters notified us to prepare for a temporary two-week evacuation to Thailand. The goal was to wait for transportation networks in China to resume normal operations so that volunteers would not be stranded with no easy way to leave.

I had less than 24 hours to pack, not knowing if I would be back, not knowing if I would see anyone in my community anytime soon. I packed my camera, laptop, and some summer clothes to prepare for the Bangkok heat. The next morning, I was rushed into a private car that ferried me off to the distant Chongqing airport. The countryside that surrounded the freeway was one that I had seen previously from the high speed train, and was much more easily appreciated from the slow speed of a car. Expecting to be back in a few weeks, I promised myself that I will venture out and explore rural Fuling upon my return.

Austin Frenes (left) and Vanessa Gomez (middle) about to board a private car to the Chongqing airport. 冯翱森和王一删准备乘坐私家车，前往重庆江北机场 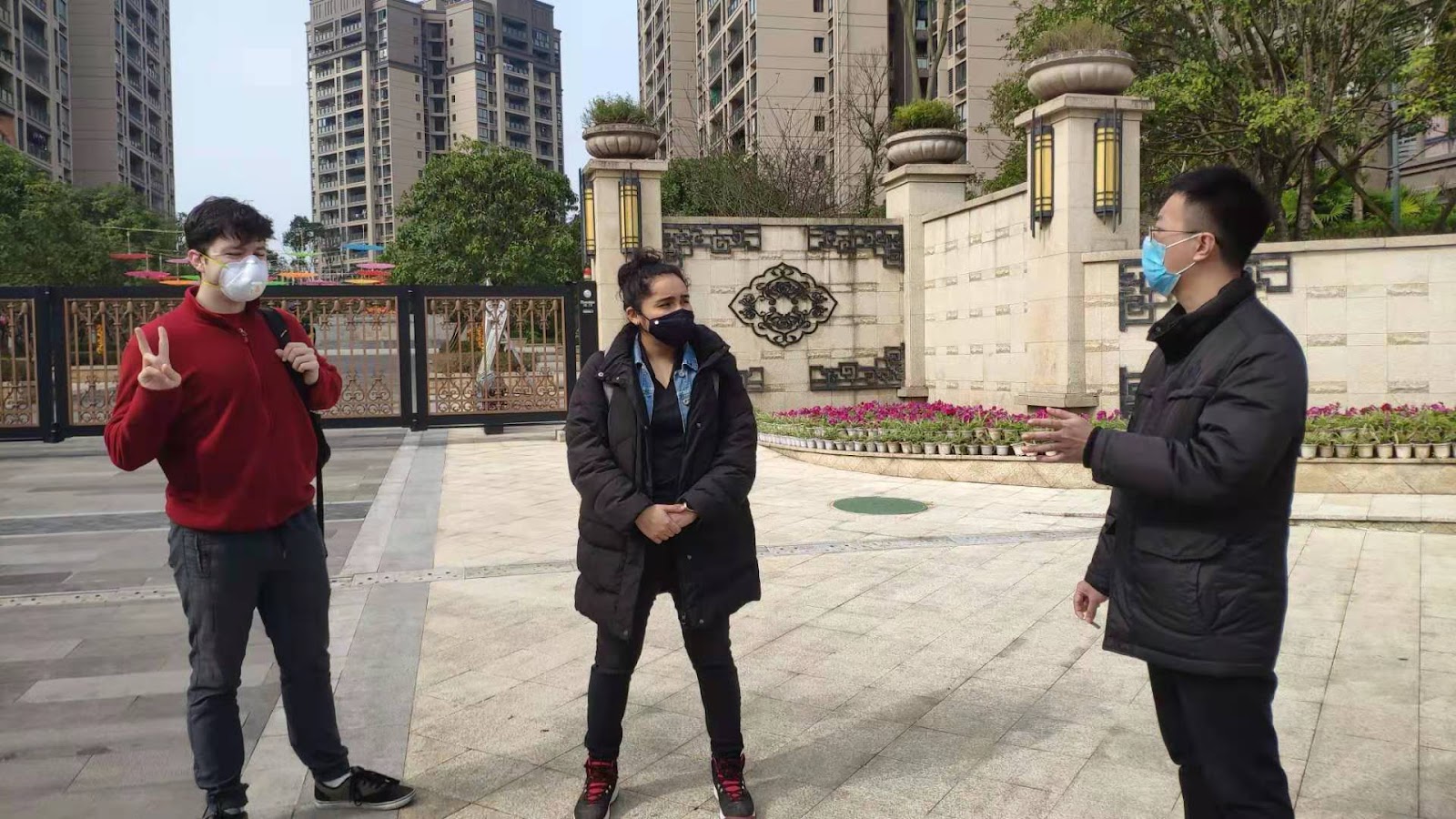 As with most things at the time, getting on the flight became a tense situation due to the tickets having been booked that morning, but not having been registered in the airline’s system by the time of check in. Fortunately, the airline held the gate open for dozens of people running a marathon through security.

Down south in Guizhou Province, Cooper Brehm, an HNC Certificate + MA student currently in Bologna, received the same notice: evacuation was imminent. Brehm recently returned from travelling with other Peace Corps volunteers in the region. He was preparing big plans for the upcoming year in which our cohort would close out the program and cement its legacy. Unlike in Fuling, Cooper was largely alone at his Peace Corps site, with nearly all colleagues and local friends having left for the recent Spring Festival. Upon receiving the evacuation notice, Cooper had a strong suspicion that he would not return. He packed his valuables, and rendezvoused with other Peace Corps volunteers at a central location in the provincial capital of Guiyang.

Over a hundred Peace Corps China volunteers trickled into the Royal River Hotel in Bangkok over the following two days. The nine days in Bangkok felt like a month. A couple of days in, we were all informed over webcam that we would not return to China to finish our service. Unfamiliar men and women from the Peace Corps came to help close our service through medical checks, document signings, and an emotional closing ceremony. They were preparing us for life back in our American homes, places where we would find normalcy only very briefly, before the virus swept the States. Most Peace Corps volunteers cried on the spot, whereas others were relieved to know that there was finally a certain outcome. I stared blankly in disbelief, and cried days later on the plane home. As the spectre of evacuation and separation loomed over us, we said our goodbyes to each other, laughed, cried, and were on our way to a world we would soon cease to recognize.

Downstream from Fuling in Wuhan City, Dan Wethli was conducting Fulbright research on how Chinese museums portray China’s 1911 Revolution. He experienced first hand what it was like to be at the epicenter of both a program evacuation, and a US government evacuation from COVID-19’s initial epicenter. From December 2019 to the end of January 2020, Dan witnessed ominous signs that something big was about to happen. In early January, a mysterious local doctor came up to him and his friend on the subway, urging them to wear masks. A tough bout of what turned out to just be the flu had him questioning for months if he had been stricken with COVID-19. (He subsequently tested negative for COVID-19 antibodies).

As January rolled on and the impact of Covid became increasingly profound, Dan was put in contact with the US Consulate in Wuhan, which was arranging for an evacuation of all Americans in the city. Initially, Dan was told that he would most likely have to conduct his Fulbright research in another Chinese city. However, it soon became apparent that the consulate would have to help Americans vacate the country, as opposed to busing them out to Shanghai for what would have been a temporary stay.

The streets were empty on the way to the Wuhan airport. Whereas Dan was directly supported by the US Consulate in getting there, other Americans had to walk as much as 20 miles to secure a seat on the flight out. After a long day, the plane finally took off in the dead of night on route to a military base in southern California. In Alaska, they stopped for fuel and were given food and clothes. “They said anything we did not take would be incinerated in case the virus was on it,” Dan commented.  For the next 14 days, the Americans were subjected to federal quarantine protocols. Nobody tested positive in the end, and Dan found himself on his way home.

Daniel Wethli (middle) finishing quarantine at a California military base with fellow evacuees.文丹（中间）和其它被撤离的人在加州军地完成隔离

Farther east in Anhui Province, Nick Kaufman was also conducting Fulbright research on the region’s demographic trends when he received his evacuation orders. Unlike Cooper, Dan and myself, Nick’s evacuation went extremely smoothly. After he received a notification from Fulbright, Nick simply packed his bags, took a train to Shanghai, and boarded an international flight home.

Set against the broader context of Sino-US tensions under the Trump administration, the COVID-19 pandemic marked the end of an era for aspiring sinologists. The Peace Corps China program and the Fulbright Program not only built friendship and understanding between the US and China, but also prepared Americans for rigorous academic programs like those found at SAIS. Each evacuee interviewed agreed: without these programs, future expertise that could be developed just will not be developed, and future friendships that would have been made will just never be made. For example, without Peace Corps China, famous authors such as Peter Hessler and Michael Meyer may have never had a chance to develop interest and expertise in China. By extension, these sinologists would not have gone on to inspire more people to pursue academic pursuits and careers relating to China.

Indeed, motivation and opportunities for future China scholars has been dealt a tough blow. For Cooper, Dan, Nick, and I, we decided we would not let this be the end of our pursuit of friendship with, and study of, China. For this reason, we subsequently enrolled at the Hopkins-Nanjing Center. Others chose to pursue careers in the federal government, and some even returned abroad to continue teaching or doing research. Just as we were shocked to be evacuated, we were surprised to find ourselves in-exile at SAIS Europe, sharing our stories with each other, eager to go out into the world and make even more stories.