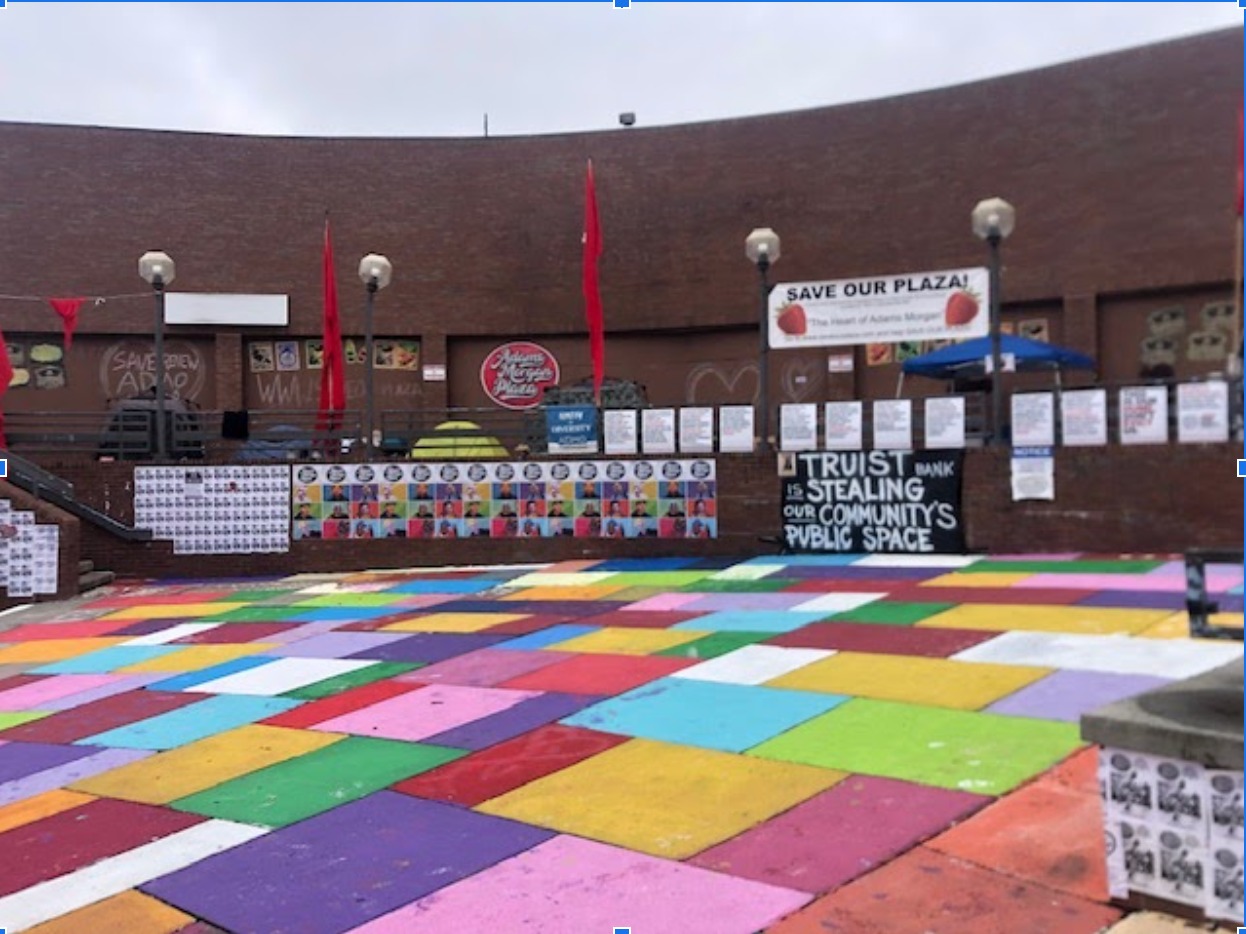 Displacement is a familiar story here in Washington, D.C. Whether it’s because of sudden spikes in rent or property taxes so high that homeowners can’t keep up, black and brown folks inevitably get pushed out while white folks move in. But these things don’t come from nowhere. Before pricing even comes into play, gentrification begins with ownership. And over the past few decades, one urban development practice has become instrumental to setting off the domino effect of gentrification in cities across the country: the privatization of public goods and interests.

Adams Morgan Plaza, located at the intersection of 18th and Columbia, has served as a cultural center for the community for decades. For years, concerts, flea markets, speeches, film screenings, and more have been staged on this corner. The most well-known of these public events is the Adams Morgan Farmers Market, which takes place every Sunday on the plaza, and has since the 1970s. For some, though, AdMo Plaza is more than an event space; it’s where they spend the night. A row of tents lining the back of the plaza represents a small community of homeless people who have taken refuge in the space for years. The community has claimed AdMo Plaza as their own in more ways than one.

This plaza is now the center of a conflict between private and public interests. The lot initially belonged to the adjacent bank, which changed hands multiple times before being acquired by SunTrust, now known as Truist Bank. While the space has been licensed for public use since the 1970s, Truist sold the lot to developers PN Hoffman in 2017, who unveiled their plans for a 54-unit luxury apartment building to replace the plaza and the abandoned bank.

Since the announcement, Truist has been taken to court by multiple civil organizations. But this September, after sitting dormant in courts for years, the conflict suddenly escalated when Truist Bank tried to take the space by force.

On September 22nd and 24th of this year, Truist Bank sent a private security force to the plaza to evict the public and the homeless encampment and set up barriers to prevent their reentry. Unfortunately, community backlash prevented their progress on both occasions, and when the police were involved, they discovered that Truist did not possess the proper legal permits needed to evacuate the space. The security forces were sent away both times, but not before one community member, Vikram Surya Chiruvolu, “had to step in front of a forklift with a two-ton concrete jersey barrier on it to stop them.”

Afterward, one of the civil organizations that took Truist to court, a community non-profit named Adams Morgan for Reasonable Development, made colorful changes to the plaza. Today, each pavement block is coated in bright chalk, creating a haphazard rainbow checkerboard along with the triangular space. Flyers, posters, and flags draw the eye to QR codes, hashtags, and calls to Save AdMo Plaza along the brick walls that mark the lot’s edges.

As co-facilitator of Adams Morgan for Reasonable Development, Vikram’s deeply familiar with the history of not just the plaza but D.C. at large, which is how he’s able to see this conflict for what it is: a single moment in a long history of disenfranchisement and gentrification, one that could have legal ramifications across the country.

In the 70s, people of color, especially Black people, struggled to get financing from banks for mortgages and renovations. When Crestar Bank (later SunTrust, now Truist) first moved into the neighborhood and bought the land where the plaza now sits, they did so as part of a banking agreement fought for by future-D.C. Councilman Frank Smith. The contract required them to continue allowing public use of the adjacent lot and to commit to antiracist banking practices.

Through the banking agreement and history of public use, Vikram and AdMo for Reasonable Development argue that Crestar Bank effectively designated the space as public via the principle of “easement by public dedication,” which places the space under the protection and administration of local government. So long as courts uphold the “easement” on the property, private owners cannot simply take the plaza back at will. Conversely, suppose Truist persuades the court that there is no easement on the property. In that case, it could set a precedent with devastating consequences for thousands of plazas, parks, and other community spaces across the country protected by common law. All of them will be at risk of seizure and development.

If approved, Vikram can see what the future holds for Adams Morgan: Further gentrification. Before AdMo Plaza, Monty Hoffman (of PN Hoffman) was behind “The Wharf,” a $2.5 billion development project that transformed the Southwest waterfront into an upscale riverside community. The waterfront was once a diverse neighborhood of immigrants and people of color, which experienced its first wave of gentrification in the 60s through “urban renewal” developments. Hoffman’s development sealed the deal. Since the beginning of “The Wharf” project in 2006, the area’s Black population has declined significantly. Additionally, according to a study by the National Community Reinvestment Coalition (NCRC), low-income households dropped from 39% to 20% from 2000-2016; and median housing prices spiked by 55% between 2010-2019. Today, condos there go for over $1,000 per square foot.

None of this could have happened without the direct involvement of the local government, which sold the waterfront to developers in 2006 for just $1. And this was not an isolated incident; according to a study by American University Radio and NPR, between 2008-2013, D.C. gave developers about $200 million in public land almost for free as part of “land subsidies” under the condition that these developers mitigate the gentrification of the neighborhood by hiring locally and “building affordable housing.” Unfortunately, these countermeasures were largely ineffective. For many years, DC was ranked number one in the nation for gentrification by the NCRC. Between 2000-2013, 41% of DC neighborhoods experienced gentrification and over 20,000 Black people were displaced.

To Vikram, gentrification is the way in which the “overt and direct racism” of the 60s and 70s has been “cloaked…in the frame of private interests.” But despite the stakes, the endless court battles, the physical confrontations, and the demoralizing precedents set by prior gentrifying developments, Vikram has hope. On their website, AdMo for Reasonable Development continues to set up community events in the space, from Halloween celebrations to musical performances. They also promote opportunities to speak to local committees and council members. Through everything, the community continues to show up for their plaza. No one has given up yet.

“[I’m] lucky to be part of a community that’s mobilized to take care of each other,” Vikram says. “We’ll just keep at it, and hopefully…we will win because our hearts are pure. I take a lot of strength in that.”