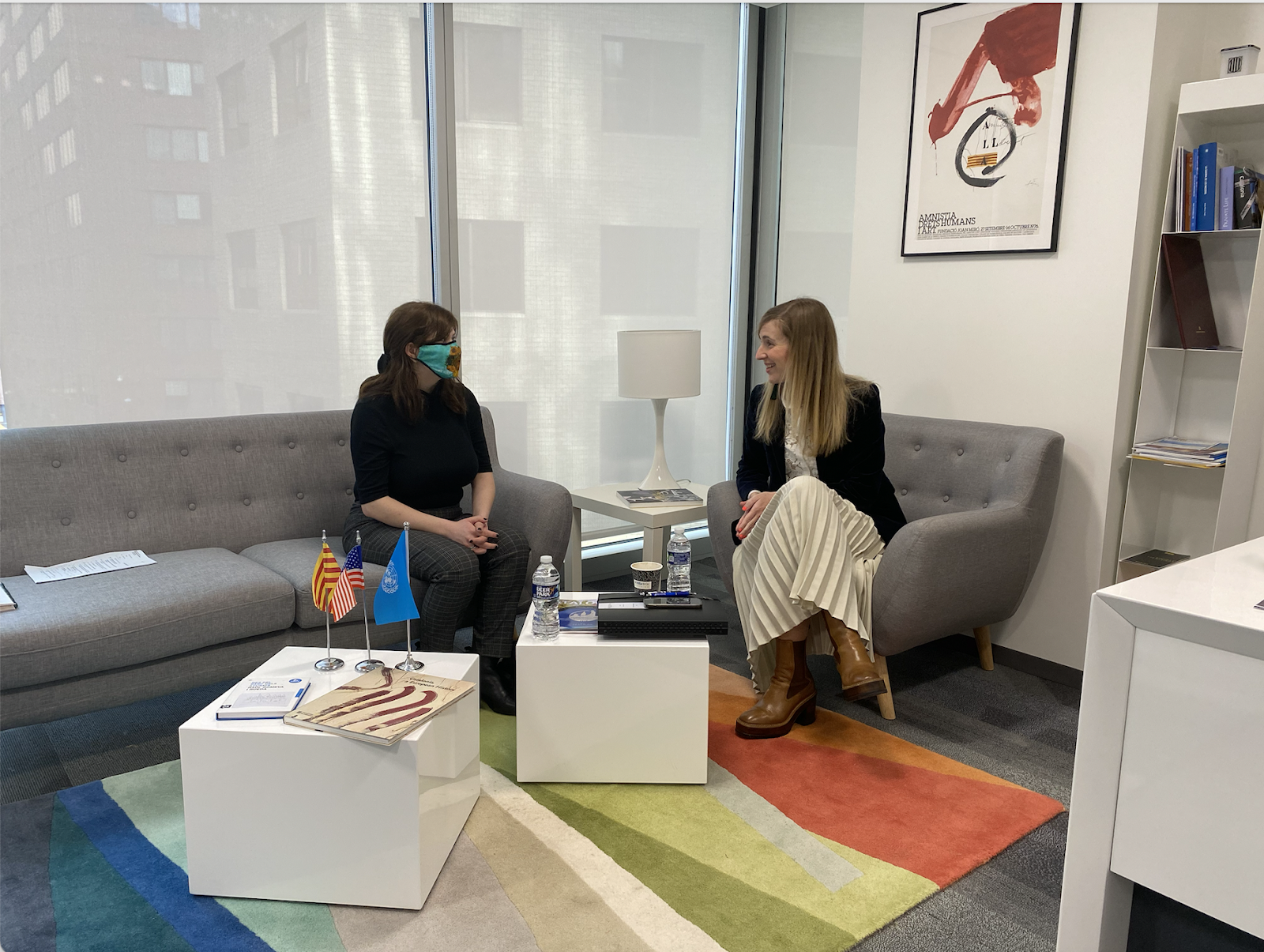 In the aftermath of another tumultuous and violent crisis over Catalan independence, the government of Catalonia now looks abroad for support.

After leading the Catalan delegation to the United States, Dr. Victòria Alsina was appointed the Minister of Foreign Action and Open Government in Catalonia in May 2021. Born in Barcelona, Alsina has lived in the U.S. for the past decade, working as an academic, a professor at NYU, and, more recently, a political figure representing the region she calls home.

“We have an agenda in the international arena,” said Alsina, speaking in the office of the Catalan delegation to the U.S., the very office that she once led. “We have a lot of focus on the E.U. institutions and the European Union itself, and [we’ve combined] this with a second focus on the Mediterranean.”

The U.S. has a role in the minister’s transnational initiative as well. “The transatlantic dialogue is very important for a lot of the things we have going on in Europe,” Alsina said.

Nestled along the southern border of France, the autonomous region of Catalonia encompasses over 12,000 mi2 of mountains and a Mediterranean coastline within the Spanish border, including the iconic coastal city of Barcelona, the capital of Catalonia. Today, the area boasts a population of approximately 7.5 million, many of whom speak Catalan, the historic native language of the area. The BBC refers to Catalonia as Spain’s “economic powerhouse” for its significant contributions to the national economy, largely from manufacturing initiatives, including the historic textile industry.

The economic viability of Catalonia as an independent state is certainly a powerful argument for independence, and many of the issues that fueled the separatist movement of the last decade are economic in nature. The BBC reports that Catalonia gives more to Spain economically than it receives back through government support, and many Catalans resent Spain for its handling of the Eurozone debt crisis of 2008. Catalonia may benefit from fully controlling its economy both fiscally and politically as an independent state.

However, economic disagreements are not the only cause for conflict. Alsina explained that many Spaniards believe there is not a lot of respect or accommodation for the great diversity of ethnic and cultural groups present within the Spanish borders, including that of the Catalan people. Likewise, many Catalans believe that a more localized, independent government would provide for civilians more effectively on social, political, and economic levels. To many, gaining independence is essential to creating a future rooted in a greater representation of Catalan interests.

The struggle for independence – or at times, basic autonomy – is centuries old, stretching back the Spanish nation’s creation. Catalonia existed as an autonomous region until the 18th century when Spain revoked its limited independence. Though briefly reinstated in the early 20th century, Catalan autonomy was once again lost following the Spanish Civil War, when the Franco dictatorship reestablished Spanish control over the region. As democracy was revitalized in Spain, decades later, Catalonia returned to its full autonomous status. But many remained discontent with the power structure, and over time, tensions rose.

The updated statute in question was approved by a majority vote in 2006 and granted Catalonia the full title of “nation.” Additionally, the Generalitat of Catalonia – the primary governing body of the region, composed of the Parliament, the Presidency, and the Executive Council – was granted powers of taxation equivalent to those of the Spanish central government. However, in 2010, the Spanish Constitutional Court revoked this statute, arguing that Catalonia was a “nationality” but not a “nation,” and that the powers granted by the statute were unconstitutional.

Alsina identified this as when the movement for complete independence from Spain began to escalate significantly. In addition to growing popular support, political leaders began to explicitly take separatist stances. In 2014, the Catalan Parliament organized a non-binding referendum to gauge support for complete independence from Spain and found that approximately 80% of voters were pro-independence. The then-President of the Generalitat of Catalonia, Artur Mas, would later be banned from public office for two years for organizing the vote, setting a precedent of prosecution of separatist movement leaders throughout the next several years.

In 2017, after experiencing constant rejection from the Spanish government while negotiating a legal, binding referendum, the Generalitat unilaterally organized a referendum for independence. The Spanish government retaliated through coercive force: Spanish police stole ten million ballot forms prior to the vote. On voting day, the Civil Guard and police forces reportedly confiscated ballot boxes from polling stations across the region. On October 1, over 900 people were injured in a series of violent skirmishes with Spanish riot police, who shot rubber bullets at crowds and used batons to prevent Catalans from voting.

The persecution of the separatists did not end with the rubber bullets and batons, ballot theft, or  blockades at voting centers. After the vote, Catalan officials announced that the referendum results were in favor of independence and that Catalonia would pursue separation from Spain. In response, the Spanish government invoked a constitutional article to suspend Catalan  autonomy and assume command of the region’s government. After sacking the Catalan Parliament, the Spanish judiciary pursued criminal prosecution against the former political leaders and activists behind the referendum.

“This continues until now,” Alsina said. “We have a repression that comes from the judiciary system that vulnerates a lot of human rights – freedom of speech, freedom of demonstration, freedom of meetings.” She went on to illustrate the importance of communicating these issues with the broader international community, emphasizing that this repression “clearly vulnerates the rule of law that the European Union has.”

Dr. Alsina’s appointment to the cabinet comes on the heels of a tense period in the struggle for Catalan independence. Nevertheless, the minister is keeping her eyes on the future. The Generalitat budget for foreign action has increased by 27.8%, which Alsina said is to help the Generalitat send the “political message” that “we have full competencies on foreign action…and we understand that we have the right and the duty to share what is going on back home internationally and that we need to have our own political voice.”

To Dr. Alsina, international recognition of the Catalan  conflict is vital to achieving a satisfactory resolution. “The wins that we had in the past do not come from the internal tables and processes that we have,” she said. “They always come from the international recognition that there is a need to find a political solution for a political conflict.”

To demonstrate the international relevance of the crisis, Alsina related the Catalan-Spanish conflict with the Scottish-U.K. dispute following Brexit, pointing to the Scottish referendum and the guarantee of a “fast-track to reenter the [European] Union” if Scotland ever elected to do so. “We think that if this is the situation in the forthcoming years in Catalonia, we also need the fast-track to enter the Union because we are a net contributor. We have long traditions of relationship[s], and we are a perfectly viable country,” said the minister.

Dr. Alsina also linked the crisis to the ongoing disputes between the E.U. and member states Poland and Hungary, both of which are under scrutiny for their compromised rule of law. “This year, [the European Commission] started to include recommendations [in its reports],” she said. “We think they should include recommendations about how, for example, Spain is using the judiciary system to solve a political conflict, about all these rights that have been attacked, about the lack of independence of the judiciary power from the executive power, etc.”

But when asked about her ideal outcome, Dr. Alsina looked not to her own beliefs but instead to what she believes the Catalan people deserve.

“What is more important, I think…is really voting, having the opportunity to vote, and respect[ing] the result.” She believes that the “ideal solution” for all who vote for independence in Catalonia is not just to have independence but also to gain membership in the European Union, a popular sentiment amongst those in favor. However, she reiterated that “what is important is not what each member of the government thinks; it’s to respect the majority of the population that really wants this solution.”

It is not yet clear what that solution will be. Between the ongoing persecution of former Catalan political figures and the unwillingness of the Spanish government to enter into negotiations, the road to Catalan independence looks longer than ever. However, Dr. Alsina does not despair. Instead, she focuses on what she can do now to achieve the future that she believes her homeland deserves: one of democratic representation and opportunity.

By Jacob Levitan  Before becoming Ukraine’s President, Volodymyr Zelensky had a TV show, Servant of the People, in which he...