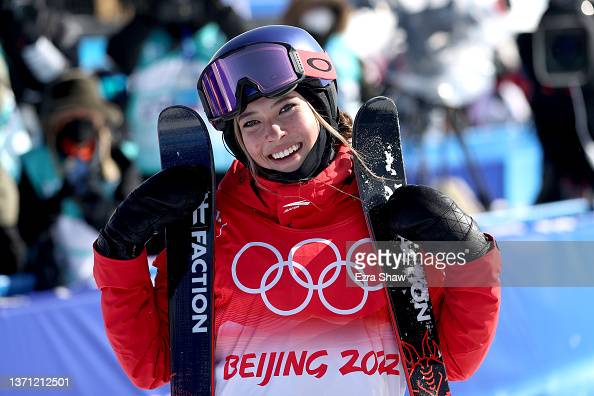 Of the athletes representing the 91 National Olympic Committees participating in the 2022 Winter Olympic Games in Beijing, none captured the same international attention as China’s star freestyle skier, Eileen Gu. Despite having won three medals for the Chinese team — two golds in big air and halfpipe and a silver in slopestyle — Gu’s technical skill and status as the youngest Olympian freestyle skiing champion have been overshadowed by a growing debate in both the U.S. and China around the issues underlying modern conceptions of Chinese identity.

Born in California to a Chinese immigrant mother and an American father, Gu was initially trained in San Francisco and competed for the U.S. at the 2018-19 FIS Freestyle Ski World Cup. However, she changed her nationality with the International Ski Federation later in 2019, aiming to represent China in the 2022 Winter Olympics. As she gained stardom through the Winter Olympics and drew more and more attention, many Chinese netizens expressed their doubts about Gu’s naturalization and openly requested her to prove her citizenship. Those doubts were then quickly buried by a nationwide celebration of her athletic achievements.

“Eileen Gu fever” was at its peak in February. Having garnered more than 20 advertisement endorsements from the likes of Estee Lauder, Victoria’s Secret, Tiffany, and Oakley, Gu represents 60% of the total number of endorsement deals taken by China’s skiers in the past year. She has been lionized by Chinese society, covered by hundreds of complementary and even flattering articles. People affectionately call her the “Frog Princess,” a reference to her unparalleled skiing talent. Her enormous fame as a naturalized athlete is unprecedented.

Her fame raises significant questions about the treatment of other ethnic Chinese and naturalized athletes, many of whom have displayed brilliant talents but haven’t gained nearly the same degree of accompanying stardom. The contours of Gu’s Chinese identity differentiates her from other athletes. Born with a multiracial identity, she is justified in embracing both her Chinese and American heritage, but only the former seems to be accepted in China. Chinese netizens showed huge fondness when Gu expressed her Chinese identity: they loved hearing Gu’s authentic Beijing accent; they were amused when she casually ate Jiucaihezi (a dumpling-like food made of Chinese chives) after a competition; they were excited to see Gu choose China over the U.S., which to them is proof of China’s national strength.

But the sentiment among Chinese netizens can be shockingly fickle. China seems quite tolerant of Gu when she “acts Chinese” but shows strong repulsion when she does not. When Gu was spotted not singing along during the Chinese national anthem, online discontent led to millions of clicks and, eventually, the Weibo censorship of the relevant hashtags. These same fans can be cynical when Gu refuses to discuss her citizenship, calling her disloyal to her motherland and suggesting that she has been faking her Chinese identity only for financial gain.

China’s reaction to another athlete — Nathan Chen, who has endured intense critique and scorn while assuming divergent cultural identities and professional tracks — also shows China’s exclusivity towards foreign identities. Like Gu, Chen was born and raised in the U.S. and won medals in the 2022 Winter Olympics. Unlike Gu, Chen — both of whose parents are Chinese — represented the U.S. in the Olympics. His achievements are hardly celebrated in China, and he has been the target of intense online criticism. Many don’t acknowledge his skating skills, claiming that his “mediocre” performance did not deserve the gold medal in Men’s Single Free Skating; some even posted doctored clips to openly mock his “ape-like” performance. Additionally, those netizens have condemned Chen for “smearing” China’s image when he agreed with skater Evan Bates’ comments about China’s human rights abuses and chose “Mao’s Last Dancer” (a song which references a highly sensitive period in Chinese history) as his background music for the 2017 International Figure Skating Classic. Chinese netizens use these examples, which can be explained as political freedom of speech or musical aesthetic taste, as proof that Chen “insulted” China, triggering more hate speech related to Chen’s identity.

Likewise, another naturalized athlete who competed for the Chinese Olympic team, Beverly Zhu, was attacked for not speaking fluent Chinese and was harshly denounced when she lost a competition. The overwhelmingly hateful comments eventually led to the intervention of the Chinese authorities, who appealed to the public to reduce hate speech. The encouragement and forbearance typically extended by Chinese society to losing athletes stood in stark contrast to the outrage hurled towards Zhu. Were netizens angry about Zhu’s athletic performance or her identity?

Mainstream China cheers for its notion of Chinese identity, not for star athletes themselves. China’s rhetoric about “promoting a shared future” and “overcoming global challenges as a community” is belied by its march towards nationalism. That Gu was depicted as a naturalized citizen devoted to serving China’s “national rejuvenation” shows that her nationwide adoration is more of an ethnic carnival than a talent celebration.

Gu is being used as a propaganda tool for a strong national image. The emerging narrative paints Gu as a milestone in China’s rise. Gu’s medals helped China surpass the U.S. and finish third in the Winter Olympics medal count, so some observers believe she was the determining factor in China’s victory and that China has demonstrated national soft power. On a structural level, China has long been disgruntled about brain drain via human capital flight to the U.S., but Gu’s example seems to imply a turning point: China may be transitioning from brain drain to naturalization, and eventually to talent introduction.

Gu’s popularity and commercial value (up to $42 million) is viewed by Chinese netizens as a sign of better career development opportunities in China. A WeChat article that elicited thousands of reposts and comments said, “Gu’s commercial value is 100 times more than Chen’s…which means with the same talent, one in China can have opportunities which far exceed those in the United States.” Chinese netizens also quoted a video clip from Fox News which criticizes Gu’s “betrayal” of the U.S., interpreting this video as proof of America’s jealousy and insecurity amidst China’s rise.

Meanwhile, Chinese society continues to depict itself as a welcoming homeland and a huge market for its overseas compatriots or those who tolerate Chinese politics. But is China broadly welcoming or only being hospitable when people accord with a narrow, exclusive interpretation of Chinese identity? Will future naturalized people find themselves under harsh attack when they express foreign identities? Some folks will sacrifice their freedom of speech for the opportunity to profit; others will decide that returning to China is not worth giving up a diverse social environment and untraditional life goals.

Chinese society has established an unforgiving attitude to its “unfaithful and unpatriotic” compatriots and warned those who straddle the national line to pick sides. Unfortunately, ethnic Chinese athletes competing for other nations have suffered from decades of conservatives’ hostility and derision, which are cliché but becoming increasingly bitter since 2020. China’s nationalistic trend is an indication that ethnic Chinese folks who serve another nation, especially the U.S., may be subject to criticism and even non-recognition from mainstream Chinese society.

During one of Gu’s interviews, she emphasized that her skiing is “not political,” but rather “pushing the human limit and connecting people.” Though her success did connect China domestically, she has been unable to connect the people from her two motherlands. She rose to a position of national fame, both a beneficiary and a victim of her popular image. Her lionized persona, endowed by jingoism and inflamed by a brainwashed Chinese society, further confirms China’s denial of foreign identity. With Chinese nationalism rising throughout the COVID-19 pandemic and Winter Olympics, Gu’s beautiful wish of human connection through athletic excellence may end up as just another tool used to exacerbate hostility between the U.S. and China.