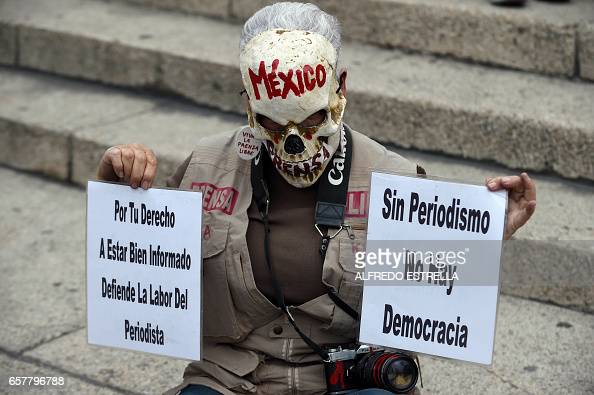 Heber López, Roberto Toledo, Lourdes Maldonado López, Margarito Martínez Esquivel, José Luis Gamboa. These journalists were killed this year in Mexico – and this is not an aberration. Reporters Without Borders (RSF) recognizes Mexico as one of the deadliest countries in the world for journalists, and it is only getting worse. According to RSF, “Mexico is sinking even deeper into a spiral of violence and impunity.”

The U.S. can and should support its southern neighbor by taking a less muted stance against this growing problem. A stronger posture would accord with the Biden administration’s stances on human rights, media censorship, and other democratic values. Swift, measured action by the Biden administration to bring together Mexican civil society and government leaders would help tackle the threat to democracy constituted by attacks on the press.

Censorship in Mexico is entrenched historically, with roots tracing back to the Spanish Inquisition, and is currently at the forefront of social problems. Despite constitutional guarantees of the right to a free press, the government has neglected its duty to protect this right and acquiesced to those who silence the truth. In some instances, the government itself has taken part in the censorship of media and violence against journalists.

In 2016, this issue reached a nadir, with “176 cases of violence, intimidation, threats, aggression, cyber-attacks, blackmail, murder and enforced disappearance,” which is the highest recorded annual number of cases against journalists in Mexico. The dangerous conditions that journalists work within are further exemplified by the fact that 90 percent of press-related cases are unsuccessfully prosecuted. A threatening trend has emerged wherein journalists who report on sensitive issues have faced threats, intimidation, and murder.

In 2018, Andres Manuel Lopez Obrador, a political outsider, won the Mexican Presidency. He ran his campaign on the slogan “hugs not bullets,” vowing to curb violence within the country. But he has not followed through on his campaign promise to bring peace. Lourdes Maldonado López, one of the journalists killed this year, met with President Obrador in 2019 and told him that she feared for her life. Yet the president did nothing to protect her before she was brutally murdered. Instead, Obrador has allowed those who systematically and systemically intimidate journalists to do so with impunity, and he has verbally attacked journalists who disagree with him.

Despite the escalating attacks and murders this year, Obrador verbally attacked journalist Loret de Mola for a critical article Mola wrote in February. Instead of addressing the attacks on journalists, the president held a meeting to label Mola and other critical journalists as “thugs, mercenaries, [and] sellouts.” He regularly pillories journalists rather than providing solace and protection for the media. Obrador refuses to take ownership of this issue and spends more time blaming previous governments and administrations for the country’s corruption, inequality, and violence.

Mexican citizens are disillusioned with the lack of accountability. Protests are becoming more frequent, and a new slogan is spreading among demonstrators: “hugs for the narcos, bullets for the journalists.” Despite country-wide protests and public outrage, little is being done. In a 2020 episode of “Who’s Who in Lies of the Week,” a morning segment of President Obrador’s news conferences, Obrador condemned “falsehoods” told by the media and called out specific journalists by name. By constantly criticizing and discrediting the press, the president is signaling that violence, attacks, assaults, and killings targeting journalists are permissible and will not be persecuted. Given his hostility to the press, the murder of journalist Margarito Martínez Esquivel in broad daylight was unsurprising.

An effect of the killings is that journalists now self-censor out of fear of retribution. Reporters limit where they will venture, investigate, and write stories. As a result, significant parts of the country suffer media blackouts wherein entire communities and regions have zero information dissemination. These zones of silence are spreading across the country. Additionally, media outlets and journalists avoid publishing stories that provide vital information about the state of governance within communities, states, and the country.

In 2019, reporter Anabel Hernández wrote a story about corruption at the highest level, implicating the government, police, military, and financial sectors. Hernández revealed the complicity of the authorities and some in the government taking sides and protecting certain cartels. Hernández, the recipient of the DW Freedom of Speech Award in 2019, was ultimately forced into exile out of fear of retribution and a litany of death threats. Mexican reporters who have not yet been forced into exile face a daunting future.

Attacks on journalists and the media put Mexico in a precarious situation; however, this issue is not limited to Mexico. Pegasus, an Israeli spyware company, was employed by Mexico’s domestic intelligence agency CISEN to collect data and monitor the phones of investigative journalists. This experiment is the beta testing for usage against journalists and could be replicated worldwide. This technology could exacerbate and accelerate democratic backsliding, which has already been underway for the past 15 years.

Domestic and foreign leaders can implement some mechanisms to reverse the violence against journalists. The first step will be for President Obrador to change his rhetoric and keep the promises he made during his campaign: to protect journalists and prosecute their assailants. In particular, he should implement training processes for authorities who act with impunity and prosecute those who will not safeguard the media.

This process should be supported and accelerated by the U.S. President Biden is making freedom of expression and press a cornerstone of his administration’s goals for democratic renewal. The administration stressed liberty of the press at the first Summit for Democracy and further underscored this issue in the Interim National Security Strategic (NSS) guidance. One of the core themes in the NSS is “the importance of free speech, freedom of the press, […], and other core civil rights and liberties.” The administration can use diplomatic carrots and sticks to convince Obrador to take a stronger line on the promises from his campaign and ensure that journalists are protected.

One way to coax Mexico into improving in this area would involve providing security assistance and training to strengthen civilian police forces in the country. If those goals were not met, the U.S. could utilize its position as Mexico’s largest trade partner to push Mexican diplomats to advocate for journalists’ protection. Additionally, the U.S. should encourage civil society and government leaders in Mexico to support legislation that further protects the freedom of the press. This can be done through sanctions or legal processes like 7031(c) of the Department of State, Foreign Operations, and Related Programs Appropriations Act, which will punish those who censor journalists. These recommendations will pressure the state to allow journalists to investigate without fear of being assaulted or killed for reporting the truth.

By Tyler Parmelee The COVID-19 pandemic has shined a spotlight on several vulnerabilities throughout American society, from dismantled state unemployment...

By Max Hahn  韩慕才 NANJING, CHINA — People around the world have been shocked and appalled to learn that Asian-Americans...

By Adam DuBard On September 15th, President Trump and the White House hosted dignitaries from Israel, the United Arab Emirates...

By Michael Xiaochen Zhang 张笑尘 NANJING, China — As COVID-19 spreads around the world and alters the way people engage...