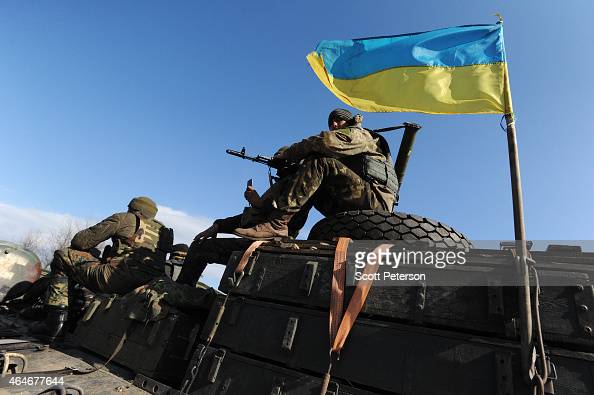 Before becoming Ukraine’s President, Volodymyr Zelensky had a TV show, Servant of the People, in which he played Vasyl Holoborodko, a humble teacher who becomes Ukraine’s President. In the season one finale, Holoborodko has an aside with Ivan the Terrible. Ivan cannot comprehend Holoborodko’s assertions that Ukraine does not want Russia to save it from the Poles and Lithuanians because, after all, are Russians and Ukrainians not the same blood? Holoborodko responds, “Why are we talking about blood? You are going one way; we, another. Let’s go in different directions and we’ll talk again in 300 years.” Ivan strikes Holoborodko with his staff, killing him on the spot, while raging that they have only one shared path. Instantly overcome with remorse, Ivan holds Holoborodko’s body in his arms, crying, “What other path?” This eerily prescient episode, aired in 2015, asks the million-dollar question: can Russia let Ukraine go?

To answer this question, we must turn to the shared and messy histories of Russia and Ukraine. Just as the French and German peoples trace their roots to Charlemagne’s Frankish Empire, the Russian, Ukrainian, and Belarusian peoples emerged from the fall of the Kyivan Rus’. This was a medieval Slavic confederacy that lasted until the 13th century when the Mongols destroyed it. The Mongol Yoke, as 19th century Russian historians called this period, saw the development of the ancient Rus’ into the Russian, Ukrainian, and Belarusian peoples.

Putin’s criminal aggression against Ukraine is his attempt to forcibly return Ukraine under Russian control, as envisioned by Russian ultranationalists. According to his narrative, Russia is resuming its role as “the Gatherer of Russian Lands” into what Putin calls the Russky Mir, or “Russian World.” Putin’s Russky Mir comprises Russia, Belarus, Ukraine, and any country with a Russian-speaking (russkogovoryasche) population, such as Estonia, Latvia, and Kazakhstan. But Russky Mir is more than just a claim to protecting those of Russian ethnicity. It is the reassertion that the Ukrainian and Belarusian peoples are, in fact, Russian, their statehoods the result of Communist and Western machinations. It is the statement that Russia is a great and glorious country whose glory comes from the empire.

Since Russia’s self-liberation from Mongol rule, Russia has made national greatness a part of its essence. According to legend, Russia became the “Third Rome” following the Byzantine Empire’s demise and had to defend the true Orthodox faith. The highly influential Tsarist Russian historian and politician Nikolai Karamzin argued there existed a special Russian glory that outshone that of Rome. Russian intellectuals and authors such as Fyodor Dostoevsky believed that the Russian spirit was universal and that the Russian people were charged with bringing spiritual salvation to the world. From the 19th century on, this messianic impulse has manifested itself in movements as diverse as the supra-nationalist pan-Slav movement – a call for Russia to create an Orthodox, pan-Slavic empire with Istanbul (the seat of Orthodox Christianity) as its capital. This was harnessed by Bolshevik Marxism and is now embodied in Putin’s Russky Mir.

“The Russian narratives of greatness are almost existential,” says Dr. Mariana Budjeryn, an expert on nuclear non-proliferation at the Harvard Kennedy School, with an upcoming book Inheriting the Bomb: Soviet Collapse and Nuclear Disarmament of Ukraine. “Russia is great because it is supposed to be, not on any merit but simply by virtue of being Russia, and the world owes Russia recognition of its greatness.” Russia’s leaders have long identified this greatness with the existence of an empire, with Ukraine as an integral part of the imperial metropole.

In the 17th century, Russia first extended authority – first secular, then religious – over Ukraine. Then, centuries after the Mongol conquest of the Kyivan Rus’, Russia absorbed the nascent Ukrainian state through the 1654 Treaty of Pereyaslav. The treaty legally placed a Ukrainian state – a hetmanate – under Russian protection as an independent entity, although the Russians almost immediately began chipping away at Ukraine’s sovereignty. Soviet and Russian historiographers, however, claim that this treaty was not a treaty of alliance, but of annexation, and marked the “reunification” of Russia and Ukraine.

From 1686 to 2019, the Ukrainian Orthodox Church was spiritually subordinate to the Russian Orthodox Church. In 2019, the Patriarch of Constantinople granted a tomos of autocephaly (ecumenical independence), establishing a Ukrainian Patriarch independent of Moscow. While Ukraine was politically and spiritually subordinate to St. Petersburg, Russians sought to “Russify” the country. In 1875, the Russian imperial government began a crackdown on the Ukrainian language during which schools could not teach in Ukrainian; Ukrainian-language books, plays, and newspapers could not be published; and pro-Ukrainian teachers were purged from the major universities.

In the Kremlin’s eyes, today’s war is a chance to finish Russia’s centuries-long campaign against Ukraine. This view was given disturbing clarity in a March 4 article by Timofey Sergeytsev on the Russian state-news agency RIA Novosti. Sergeytsev claims that all of Ukraine has been Nazified and requires total de-Nazification. Moreover, Sergeytsev asserts that “history has shown that Ukraine is impossible as a nation-state and attempts to build Ukraine will inevitably lead to Nazism…the de-Nazification of Ukraine will inevitably lead to its de-Ukrainization.” This, at its core, is the problem: Russia’s leaders not only deny Ukraine’s claims to its land, but Ukraine’s very nationhood.

To understand Putin’s thinking, one must look at two Russian philosophers: Ivan Ilyin (1883-1954) and the contemporary Alexander Dugin (1962-). Putin uses Ilyin’s writings about the necessity of a strong Orthodox leader to defend a spiritually pure Russia from a hostile and degenerate West.

“Putin is borrowing from Ilyin to solidify his fascist regime,” said Professor James Wertsch, Director Emeritus of the McDonnell International Scholars Academy of Washington University in St. Louis and author of How Nations Remember: A Narrative Approach. “It’s avowedly fascist in that there has to be one leader owed total loyalty no matter what.”

Putin also draws on the works of the neo-Eurasianist and fascist Alexander Dugin. Referred to as “Putin’s Brain,” Dugin argues in his books – required reading at the Russian General Staff Academy – that Russia is a unique “Eurasian” state, distinct from the degenerate Western civilization with which “pure Russia” is locked in an existential struggle. Russia must defend a spiritually pure civilization against decadent Western values, which, in his mind, means Moscow must save Ukraine from the West.

Putin’s road to war was paved partially by a narrative that blends Russia’s eternal victimization, a messianic mission to save the Russky Mir, and the belief that the Ukrainian nation is a nefarious, Western-inspired fiction. But his belief in Western disunity, his need for personal and imperial glory, and (perhaps) fear of his own mortality impelled him to take this road. “Putin is 69; it looks like his health is starting to fade, and if he wants to be known as Vladimir Velikii [the Great],” said Professor Wertsch, “to create his Russian Empire, he needs to bring Ukraine back.”

“The irony, of course, is that what Putin is succeeding in doing is making the strongest Ukrainian nationalist movement they’ve ever seen,” said Wertsch. Ukrainians now overwhelmingly favor independence from Russia, and as of March 8, 42 percent of Ukrainians see relations between Russia and Ukraine as irreparable. With the heart-wrenching images coming from Mariupol, Irpin, and Bucha, we can expect this number to rise.

Russia’s leaders have long defined its greatness by keeping Ukraine as part of Russia. Putin’s former chief propagandist, Vladislav Surkov, noted that Russia’s only historically effective option with Ukraine was “coercion into fraternal relations.” If the cycle of violence is to be broken, Russia will need to fundamentally reevaluate how it perceives not itself and Ukraine.