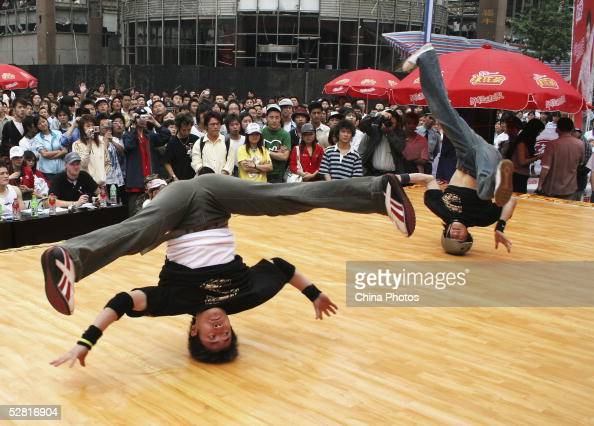 As a form of art and body movement that originated in the urban areas of the United States of America, “street dance” is an umbrella term for dance styles including, but not limited to, popping, locking, breaking, and hip-hop. Street dance has become a global trend, it has manifested itself in wildly different ways across regions. Although America and China have drifted apart somewhat in recent years due to COVID, and political and economic disagreements, the cross-cultural exchange continues between the countries, and many Chinese youth remain interested in street dance. They are borrowing some ideas from the US and “global youth culture” but are also doing things their own way.

Old School and New School Street Dance in the US

Generally speaking, street dance in the US is part of urban and working-class culture. On the West Coast, “popping”

was first born in the inner city of California in the 1960s, and “locking” was popularized in inner-city LA by its debut on Soul Train in 1971. Meanwhile, on the East Coast, hip-hop was born in the Bronx, New York City, a neighborhood known for its drugs, crime, and street gangs. In 1967, a Jamaican immigrant nicknamed Kool Herc organized parties as the South Bronx DJ. Dancers could circle around during music breaks to demonstrate their techniques. The word ‘Hip-hop’ was invented later in 1974 by DJ Afrika Bambaataa. With origins in the African American dialect, “hip” was used to refer to the movement of the human body, i.e., legs and arms. Additionally, this term was also used to describe acquiring knowledge and making improvements. As for “hop”, it literally means ‘jump’. United, these two words express the ideology of hip-hop – moving forward, developing, and understanding modern life.

From the 1970s to the middle of the 1980s, the predominant style of hip-hop dance was Breaking. Originally, it featured a culture of dance battling. With the change in music in the late 1980s, hip-hop freestyle emerged. Compared with Breaking, hip-hop Freestyle led to body movements more suited to the music style of the times. As hip-hop became more popular, its original association with protest diminished, and ultimately it became the mainstream dance form by the end of the 20th century.

Hip-hop has rapidly commercialized, especially in the 21st century. It can be divided into two schools. The Old School is the base and origin of hip-hop. Normally it is free, improvised, relaxed, and energetic. The New School became more technically complex and is characterized by choreography with music tempo.

However, the use of choreography marks a departure from the original freestyle hip-hop. In response, some dancers consider it urban dance, a new style that evolved from hip-hop dance and combines choreographers’ own understanding of the music. Competitive collegiate dance teams began to form in the 1990s, and slowly the dance style was popularized by such LA-area collegiate dance teams and became known as the LA style.

Over time, TV shows and streaming media began to spread street dance culture to larger audiences. For example, one of the best dance crews, Kinjaz, became the 8th season America’s Best Dance Crew champion in 2015 and founded its own dance studio in 2016. It has since opened more chapters around the world, including in China. Youtube, Instagram, and TikTok also provided significant platforms for the whole industry, dance community, and amateur dancers to share their art and gain followers. This created economic opportunities for street dance enthusiasts and turned street dance into a global phenomenon.

Although dance is a cultural and social activity, some topics can still be politicized. Used as a derogatory term, “urban”

became a way to refer to urban ghettos, as many dancers came from and/or lived in impoverished inner-city neighborhoods. The term “urban dance” was used around the world for more than a decade before it was changed in the context of the Black Lives Matter movement in 2020. In the end, the term “urban dance” was replaced by “open style choreography.”

Indigenization of Street Dance in China

Street dance was introduced in China around 35 years ago. After the Reform and Opening-up, breakdancing and hip-hop first spread in China in 1987 through the American breakdancing-themed musical movie Breakin’ (1984). The first wave of street dance in China was dominated by Breaking. Hip-hop culture was featured in Chinese films merely one year later with the screening of Rock n Roll Kids in 1988, which was directed by controversial filmmaker Tian Zhuangzhuang and led by Chinese dancer Tao Jin. It is reasonable to believe that the Chinese audience related to the hyperphysical moves of breakdancing due to their similarity to kung fu and other Chinese martial arts moves. The early breakdancers, aka B-boys, in the US even claimed that their power movements were inspired by Chinese martial. However, the first wave did not last long, as the Chinese cultural environment still remained relatively conservative – the older generation of Chinese people still had very limited acceptance of American culture and were concerned that negative perceptions hip-hop culture could drag the youth down.

In the late 1990s, hip-hop prevailed again in the Chinese mainland. The second wave originated in Japan and South Korea, driven by the success of the first generation of K-pop groups, such as H.O.T. and NRG. Inspired by K-pop and Japanese hip-hop culture, the first generation of Chinese idols was another driving force promoting the popularity of street dance. Until the end of the 1990s, some of the earliest Chinese dance crews, including Speed Crew and STO Crew, were founded in Guangzhou. Some prominent dance studios also emerged in Beijing in the early 2000s, such as Zaha Sugar and Wujiawu. The latter even created one of the most influential dance competitions – Keep on Dancing (KOD) – in 2004. By inviting famous US dancers as referees and judges, such as Skeeter Rabbit, Elite Force, and Electric Boogaloo, Wujiawu gained a lofty reputation, making it of the greatest contests of its kind in Asia and one of the four major global dance competitions, along with Juste Debout in France, UK B-Boy in Britain, and Battle of the Year in Germany.

Promoted by international competitions, street dance gradually hit the mainstream in China in the mid-2010s. Covering eight different countries, the first annual KOD World Cup was launched in 2016. Breakdancing was introduced to the Youth Olympics as an official sport in 2018. Additionally, the first season of Street Dance of China was released in 2018. Inviting the most famous Chinese singers and actors as team leaders, such as Jackson Yi, Han Geng, and Z. Tao, attracted more attention and showed the continued popularity of street dance in China.

Along with on-screen popularity, the number of registered dance studios in China grew from around 38,100 in 2017 to 66,900 in 2021. As one of the most important venues for cross-cultural exchange, international dance hotspots have served as a site of street dance revolution and produced a variety of excellent dance resources and choreographies.

As a result of the COVID-19 pandemic, countless dance competitions and dance studios were suspended or closed in the US and China. Some physical cross-cultural exchanges were also temporarily suspended under the backdrop of bumpy Sino-US relations.

However, looking back, one may still conclude that street dance created extensive cultural exchanges between the US and China. First, American culture and Chinese culture were mutually inspired by each other’s street dance styles/trends. The influence of Kung Fu films on the early development of breakdancing proved that the US and China share some aesthetics and philosophy. Nowadays, there is even a greater fusion between American street dance and contemporary Chinese dance.

Second, street dance represents resistance or relief for global youth. Originally, for African Americans, street dance was a way for dancers to escape harsh realities, strive for achievements, and find a sort of self-redemption missing from their daily lives. By forming dance battles instead of real fights on the street, African-American youth could relieve stress and dance for peace amidst a harsh sociopolitical environment. In contrast, street dance was first introduced into China as a trend and was hailed as a form of cultural fashion by idols. Although introducing idol culture weakened the symbolic resistance of street dance, street dance continues to offer a gateway for Chinese youth to have fun, fulfill their dreams by imagining themself as idols or superstars, and temporarily escape from their work and studies.

Third, street dance has spread in two ways: by professional dancers and amateur audiences. Professional dancers have influenced much more direct cross-cultural exchange between the US and China through international dance competitions. It is also noteworthy that the branch of open-style choreography features many Asian Americans, which can explain its quick rise to popularity in China. Asian-American influence on open-style choreography has gradually strengthened the cross-cultural exchange between the US and China and has led to more collaborations, competitions, studios, and classes for the two countries. The Chinese public audiences were influenced by Japanese and K-pop street dance culture, which in turn has its roots in US dance culture. Thus, in contrast to the direct influence on professional dancers brought about by competitions, amateur groups and the public were influenced by US street dance culture indirectly.

Since street dance was introduced to China thirty years ago, it has spread around the whole nation to become a full-fledged industry. Dance is a universal language, and it has the unique ability to transcend the constrictions of language and reach into the hearts and minds of an audience, no matter their country of origin. In that way, American-made hip-hop has been domesticated and made into its own identity in China over the years. Despite geopolitical tensions and differences, this diffusion of culture through dance has proven to be an effective and interesting soft-diplomacy tool to connect the US and China.

One thought on “From the US to China: A Cross-Cultural Exchange through Street Dance”