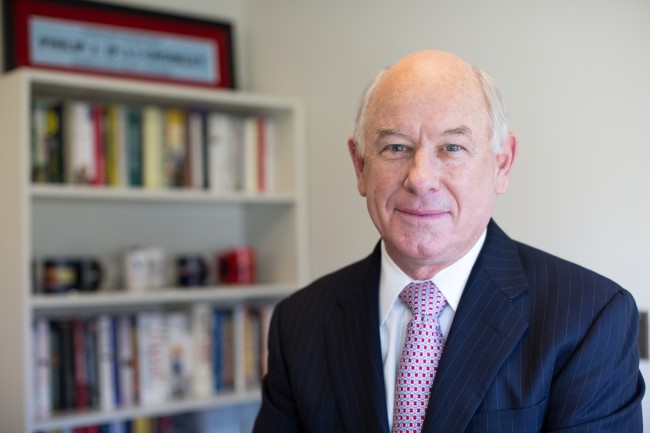 Philip J. (P.J.) Crowley was nominated by President Obama in 2009 as Assistant Secretary for Public Affairs at the State Department, a role he served until March 2011. As Assistant Secretary, he was also the primary spokesman for the State Department during a time of massive government leaks, namely the release of classified diplomatic cables. He also served as Special Assistant to President Clinton for National Security Affairs on the NSC. Crowley spent 26 years in the US Air Force, retiring at the rank of colonel in 1999. Today he is Professor of Practice at The George Washington University. Crowley was recently a guest speaker in Michael Getler’s news media course at SAIS, after which he agreed to answer a few questions for The SAIS Observer. The topic is a timely one: secrecy and reporting in the age of leaks.

1. The names Julian Assange, Chelsea Manning, and Edward Snowden have become synonymous with the words whistleblower, activist, and hero (or traitor). Given your own experiences in the military and government, and considering the importance of the public interest and classified information, should they have released the information they did?

No, but their situations are not identical. I consider Julian Assange an activist, not a journalist. His actions put the lives of real people at risk, but he was not bound by any pledge of confidentiality. Chelsea Manning and Edward Snowden took oaths that they would protect classified information. They violated that responsibility. Their job was to defend the national interest, not define it.

2. In November 2010, the largest leak of classified information in US history, known as “Cablegate,” happened during your tenure at State. As the official spokesperson then at the State Department under Secretary Clinton, how did you manage this crisis? What were the key lessons?

Actually, the leak of defense documents was larger, but the release of State Department cables was broader, touching on virtually every relationship the United States has around the world. We were unhappy the compromise occurred. As Edward Snowden said in 2009, this stuff is classified for a reason. But we tried to engage the media in possession of these documents constructively. Without discussing classified information directly, we tried to point out where vital interests were at stake and where lives were significantly at risk. The editors and reporters made some adjustments in certain cases to their coverage plans. We felt the best approach was to engage the media in a professional manner. We recognized they had a job to do and they recognized we had valid concerns regarding the substance being addressed.

3. Is the current administration’s stance on secrecy and journalists (with regard to censorship) setting a dangerous precedent in a democracy?

Not at all. Every successful entity has secrets. Coke has a secret formula; Google a secret algorithm. Take those away and they lose their competitive advantage. Governments are no different. There was no censorship in this case. The media widely reported what was in these cables. They withheld information only where we could make a case that lives were in jeopardy. The government’s legal actions were directed at those responsible for the leak, not those who reported sensitive or classified information.

4. On March 10, 2011, you criticized the Pentagon’s alleged mistreatment of Chelsea Manning, the Army private suspected of providing WikiLeaks with secret diplomatic cables (classified information). Why did you ultimately decide to resign?

Manning’s treatment in pre-trial confinement was excessive. The United Nations and the trial judge reached the same conclusion I did. I thought this abuse was undermining the credibility of his prosecution and negatively influencing global perceptions of US actions and policies. I gave an honest answer to a heartfelt question. I did not intend my comments to generate a public controversy, but that’s what happened. In the aftermath, I felt the best course of action was to resign. It was my decision to do so.

5. While in government, how does a public servant support policies surrounding classified programs with which one might otherwise personally disagree?

First of all, as citizens, we should all recognize that our leaders confront incredibly difficult and complex challenges every day. The debates on television tend to oversimplify the options that exist. They are seldom black and white. They almost always involve competing national interests with no straightforward or cost-free solutions. As a public servant, when it comes to classified programs, you have access to some information but not all. Or you are focused on one element of policy, but recognize that there are a variety of imperatives involved in major decisions. What you do is develop the best options for decision makers that you can, and trust they will make informed decisions in the national interest. If you feel you cannot faithfully execute a policy decision in good faith, you have no choice but to resign.

6. How does a journalist balance having access to sources versus writing a fair and complete story?

Journalists need to develop good sources in order to write fair, balanced and complete stories that help sustain an informed citizenry. One is necessary to achieve the other.

7. In a democracy, a timeless test endures between the government’s right to secrecy and the public’s right to know. This week, two Pulitzer Prizes for Public Service were awarded to the Washington Post and The Guardian US for their coverage of the controversial NSA leaks by Edward Snowden in 2013. Do you think any part of the leaks was in the public interest?

The debate is in the public interest. I happen to believe that the debate could have been generated without compromising tens of thousands of highly classified documents. The Pulitzer Prizes were awarded for outstanding journalism. This should not affect what actions are taken with regard to Edward Snowden.

8. How do you balance the need to preserve American civil liberties with protecting Americans from threats (e.g., like those posed by al-Qa’ida and other non-state actors)?

We need to do both. The test of any democracy is what we do in the midst of crisis. There was a mindset immediately after 9/11 that everything had changed, that established procedures could not cope with what we perceived as a dramatically different threat. We did make some important adjustments, but made some mistakes as well. In times of war, we as a people give government considerable latitude in dealing with the immediate crisis. We have gained a greater understanding of the challenge over the past decade or so and are appropriately making necessary adjustments. This rebalancing will go on for some time.

9. President Jimmy Carter said “I think it is good for Americans to know the kinds of things that have been revealed by [Snowden] and others — and that since 9/11 we have gone too far in intrusion on the privacy that Americans ought to enjoy as a right of citizenship.” Do you agree?

Government certainly needs to be more transparent. Immediately after 9/11, we started restricting more information with the logic that we should be careful what we tell our adversaries. In some areas we went too far and withheld information that it is important for our citizens to know. The question is, where is the sweet spot? It is not static, but now, in order to sustain political support for what we need to do to keep the country safe, the imperative should be disclosure unless there is a compelling reason to do otherwise. There is a lot we can tell our citizens without compromising highly classified information. We just need to commit to do it.

10. How is WikiLeaks as a platform different from mainstream news organizations like the New York Times, the Washington Post, and The Guardian when they disclose secret information?

It’s a great question. As I said, Julian Assange to me is an activist, not a journalist. You can see their different roles in how they dealt with the information they received. Assange’s view was to put it all out there and let the people judge what was important and what wasn’t. But this radical view of transparency failed to take into account the impact of the disclosure on the safety of people quoted in these cables. The journalists for the New York Times, The Washington Post and The Guardian took the information and provided it with context. And they tried to do this reporting while protecting broader social interests, such as preventing injury or loss of life. This is what journalists try to do every day.

Next post Wear the SAIS Uniform
The SAIS Observer Staff