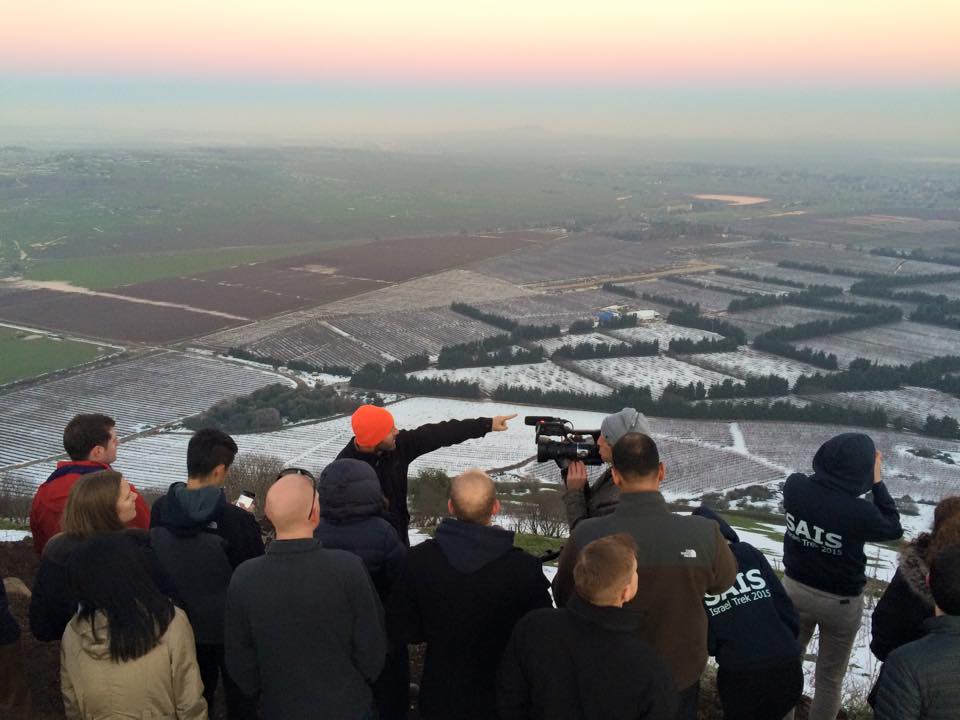 WASHINGTON — During the past Winter Break. January 17th-24th, the SAIS Israel Club led its inaugural trip to explore Israel — the land that lies between the Jordan River and the Mediterranean Sea. Over the course of seven days, a diverse group of 48 SAISers — including MA and MIPP students from both Washington and Bologna — were immersed in the breadth and depth of Israeli society, history, and culture.

The trip was led by a group of six Israeli SAIS students, who epitomize the wide spectrum of ethnic backgrounds and political ideologies that make up Israeli identity. In order to foster a deeper understanding and appreciation of Israel, we shared our individual experiences of growing up in Israel, serving in the military, and being a citizen of Israel.

“There is tremendous value in the student-led component of the trip, the ability for me to share my home with my peers, as well as my personal experiences… [this] is the most powerful component of the whole trek,” said Yogev Moyal, a first-year ERE student who was the lead organizer behind the delegation.

The organic, genuine, and personal nature of the trip facilitated an open atmosphere where participants were encouraged to ask even the thorniest of questions. Naturally, this spurred an incredibly strong group dynamic.

Over the course of the week, the delegation met with Israeli government ministers, the former Supreme Court President Asher Grunis, young Israeli students and alumni, journalists, policy advisors, Nobel Prize winners, and ideologues. We discussed issues ranging from the geopolitical relations of Israel and its neighbors, the cultural and religious history of Jerusalem and the Galilee, as well as the arduous and extensive history of the Jewish people — beginning from the times of the Second Temple in 70 C.E to the creation of Zionism, the Holocaust, and the miraculous ‘start up’ nation of present-day Israel. Israel started off as an idea. It was created from the determination of a people who transformed sand dunes into sprawling cities, a people, who despite facing seemingly insurmountable challenges, continue to thrive.

The Trek began on a characteristically warm and sunny winter day in Jaffa with Shimon Peres — the former President, Prime Minister, and Nobel Peace Prize Winner — at the Peres Center for Peace, an NGO he established. He began the conversation with his famous adage, “you are as great as the cause you serve, and as young as your dreams.” This aphorism is of great use to the 92 year-old, who continues to work with the organization, as well as advocates for the necessity of peace between Israelis and Palestinians. He stressed the important role global companies play in reducing poverty and bolstering peace. His optimism should not be mistaken for idealism; in the 1950s Peres served as Director General of the Ministry of Defense and was instrumental in the establishment of Israel’s extensive defense apparatus, as well as the 1994 Oslo Peace Accords, the closest Israelis and Palestinians have come to a signed peace agreement.

Later that afternoon in the Golan Heights, overlooking the Syrian border town of Quneitra, we were reminded of the tenuous stability in the region. A few hours before our visit, Jihad Mugniyeh, the son of notorious Hezbollah military leader Imad Mughnieyh, was killed, along with several other Hezbollah operatives in an Israeli air strike a couple miles away from our look-out post. This reality was at times shocking and hard to digest — knowing how quickly the semblance of safety in Tel-Aviv can dissolve when you venture a mere two hours away in either direction north or south. This grim understanding was reinforced when we visited the border town of Nachal Oz, which lies on the eastern edge of the Gaza Strip. There we visited a small Kibbutz, or collective community, which has been under constant rocket and mortar attacks from the Gaza strip for the past nine years. Notwithstanding, the inhabitants have acclimated to this harsh reality; the kindergarten was enclosed on all sides by 15 foot-high concrete barricades.

On the third day, we passed through the Qalandia checkpoint and the separation barrier that demarcates Israel from the West Bank. We were on our way to Ramallah for a meeting with Dr. Hanan Ashrawi, the first woman elected to the PLO Executive Committee. She currently serves as the head of the Department of Culture and Information. She offered her acerbic perspective on the current political impasse between Israelis and Palestinians, and on the Palestinian strategy to gain international recognition.

Following this bleak perspective, we visited the offices of a burgeoning Palestinian start up Yamsafer, and met with the company’s CEO as well the founding partner of Sadara Ventures, the first Palestinian-based venture capital fund. Sadara, which means “setting precedent in the space,” is looking to broaden the typical Palestinian narrative through helping entrepreneurs build world-class companies with the hope this will create positive ripple effects across Palestinian society.

The goal of the trip was to expose the participants to a wide range of attitudes and narratives, and to allow them the space to form their own opinions. Tyler Duhame, a Strategic Studies concentrator was deeply affected by the stark contrasts. “The range of unadulterated opinions, and the ability to compare and contrast from Jerusalem to Ramallah encapsulated the situation in a more visceral way,” Duhame said.

Many participants averred that after being exposed to both sides of the conflict, they are left with only more questions. Yet that consensus does not necessarily translate into hopelessness. It is easy to judge each side when you are watching it on your screen 3,000 miles away, but when you are on the ground, you realize the situation is infinitely more complex than portrayed in the media.

This does not mean the conflict is intractable, as Jim Marckwardt, a MIPP Latin American Studies concentrator, put it. “Israelis and Palestinians are in agreement that there is a fundamental lack of proper education and communication,” Marckwardt said. “However, I was disheartened to learn that now they actually talk less.” Still, the reality on the ground also includes some positive aspects as Megan Doherty, a Strategic Studies Concentrator, said: “The trip made me more informed of all the viewpoints—one of which is that there is a devoted effort to mobilizing the youth to end the conflict.”

What was articulated was that Israel is a land of many contradictions: it a nexus of old and new, religious and secular, east and west. It is regarded as the holy land of four major religions: Christianity, Islam, Judaism and the Baha’i Faith, while at the same time, Tel-Aviv stands as the gay capital of the Middle East and Europe.

Being only the size of New Jersey, we traversed Israel’s geographically diverse biomes from the snowy mountains of the Hermon in the north to lowest point on earth, the Dead Sea in the Negev desert. The participants were exposed to the myriad of political, social, economic and cultural influences that have shaped Israel into what it has become today. Mugi B, a Middle East Concentrator from Mongolia, said: “In my culture we have a proverb [that says] ‘It’s better to see once than hear a thousand times’… with all the media coverage around the Middle East, and the historical significance of the land, it is a misfortune to miss out on a trek like this.”

I would like to thank my fellow trip coordinators, Yogev Moyal, Benji Preminger, Lee Levy, Edan Cohen, and Ronit Gudes Totah for all their hard work and dedication. We look forward to having you join us in Israel next year!

Next post Piloting the Present for a Pilotless Future
Zoe Guo