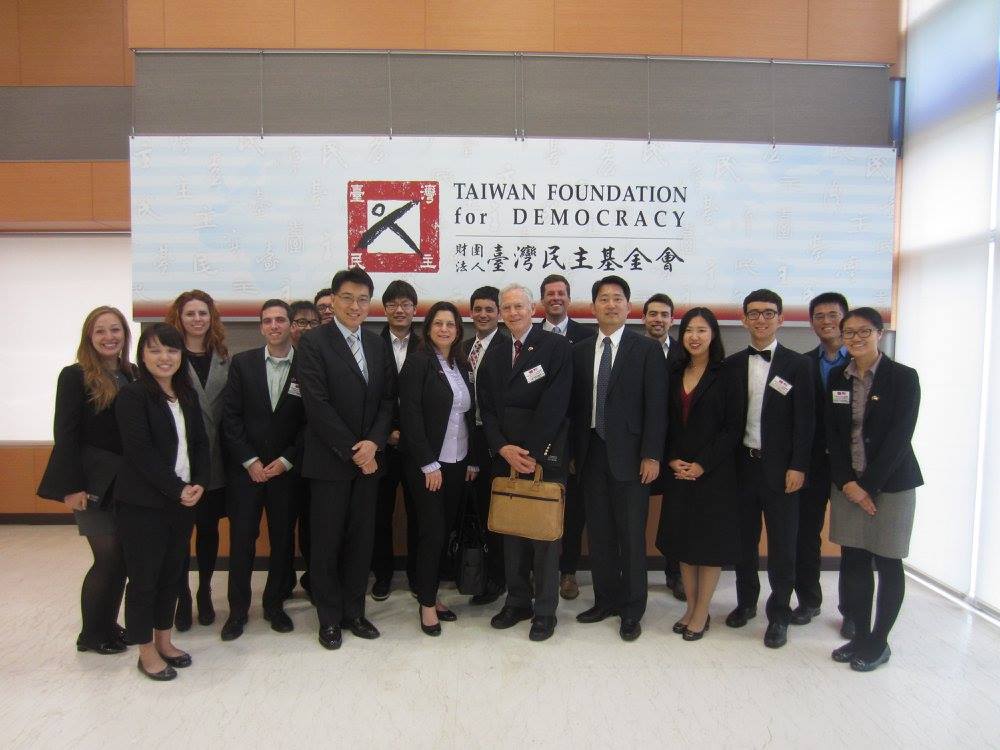 SAIS students and professors gather for a photo in front of the Taiwan Foundation for Democracy. Photo by Han May Chan

The Jan. 16 election resulted in a decisive victory for Taiwan’s opposition party, the Democratic Progressive Party. The DPP, capitalizing on broad dissatisfaction with President Ma Ying-jeou’s leadership and political discord within the incumbent Kuomintang, or KMT, captured 68 out of 113 seats – an absolute majority – in Taiwan’s Parliament, the Legislative Yuan. Its leader, Dr. Tsai Ying-wen, won the presidential election with 56 percent of the vote.

These outcomes are notable for two reasons. First, as students learned over the course of the study-tour, the politics surrounding Taiwan’s 2016 presidential and legislative elections did not resemble those of past contests. Although still relevant, especially amid fears of excessive dependence on a slowing mainland Chinese economy, cross-strait relations and associated issues of reunification, independence, and national identity no longer dominated Taiwan’s domestic political discussion. In their place, domestic economic and political reform, and social justice issues emerged as voters’ foremost concerns. In this sense, the nature of Taiwan’s domestic politics appears to have, changed, for the time being at least.

The emergence of the newly-formed New Power Party as a political force highlights the shift of public concern away from traditional issues. The NPP, which grew out of the 2014 Sunflower Movement, has campaigned on a political reform and social justice platform, focusing on issues such as governmental transparency, inequality, support for the elderly, and indigenous rights. During an hour-long presentation to SAIS students, NPP representatives did not mention cross-strait relations even once. The NPP – which counts a black metal frontman among its party leaders – performed well in the 2016 legislative elections, winning five seats and establishing itself as the third largest party in the Legislative Yuan.

However, as individuals affiliated with the KMT were quick to note during their conversations with students, the continuation of this new trend in Taiwan’s domestic politics may depend largely on maintenance of cross-strait stability. This leads to the second significant implication of Taiwan’s 2016 election: Dr. Tsai and the traditionally “pro-independence” DPP’s sweeping victory introduces uncertainty to the cross-strait relationship.

Although Tsai has steered the DPP in a moderate direction, committing herself to maintaining the political status quo in cross-strait relations, her ambiguous position on the 1992 Consensus – the notion of “one China, different interpretations – may undermine her ability to achieve this goal. While Tsai no longer rejects the Consensus, as she did during her failed 2012 presidential bid, she does not explicitly accept it. Instead, she has stated that she will promote peaceful cross-strait relations on the basis of an “existing political foundation,” which includes Taiwan’s existing constitutional order and the accumulated outcomes of more than 20 years of cross-strait interaction.

While Tsai’s ambiguous language appears to reflect a sincere attempt at finding a new political formulation that both sides of the strait can accept, Beijing’s interest in her proposal remains uncertain. Following the results of the January elections, the Chinese government’s Taiwan Affairs Office released a statement asserting China’s commitment to the one China principle and adherence to the 1992 Consensus. However, conversations between members of the SAIS election study tour and Chinese representatives suggest that Beijing’s position may be flexible, to an extent. Chinese scholars and officials voiced their continued confidence in the patient and peaceful development of cross-strait relations, and recognized China’s need for stability in order to maintain its development. Further, some implied receptiveness to a new formulation by pointing out that the 1992 Consensus was originally a KMT idea.

The question of whether Tsai will be able to achieve a new cross-strait formulation with Beijing is an important one, and has far-reaching implications for those on both sides of the strait. While DPP-affiliated individuals who spoke with students during the tour expressed optimism at the prospect of reaching such a formulation, KMT-affiliated individuals were skeptical. Indeed, if Tsai were to reach a mutual understanding with Beijing, it would strike a significant blow to the KMT’s long-held narrative that only it can manage the cross-strait relationship. It remains to be seen whether Beijing will accommodate Tsai’s attempts to maintain cross-strait stability on her terms. However, on this matter, the Chinese experts who spoke to SAIS students were clear: Tsai must speak loudly and clearly.

The 2016 SAIS Taiwan election study-tour was made possible through the generous support of the Taiwan Foundation for Democracy, the Taiwan Economic and Cultural Representative Office, the Taiwan Ministry of Foreign Affairs, and the China Academy of Social Sciences’ Taiwan Studies program

Next post Continuing the Discussion: The South China Sea
sgrosve2