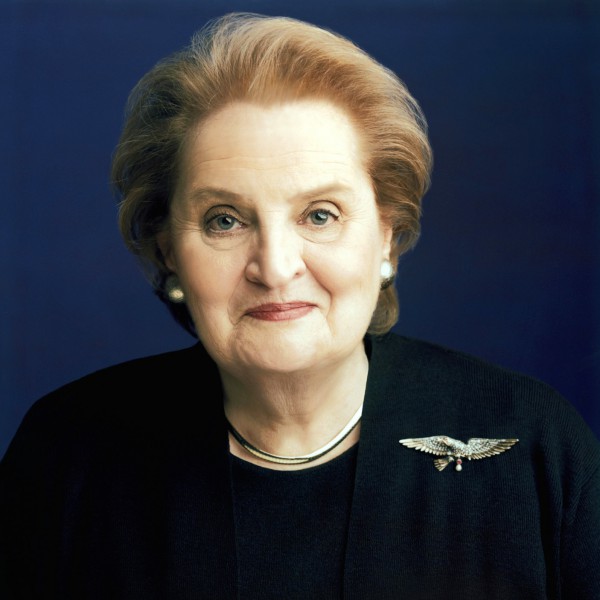 WASHINGTON — On Wednesday, Oct. 8, at 12:30pm, Kenney Auditorium was standing room only. Those who arrived after all the pre-set seats had been taken brought in chairs from the back room, while the latecomers stood rows deep at the back. Former Secretary of State Madeleine Albright was returning to SAIS as a part of the Defense Against the Dark Arts lecture series for an interview with Professor John McLaughlin, her former colleague.

Approaching the dais, she may have looked like a reserved older woman, but from her first words it was clear that she remains a dynamite personality with a formidable intelligence and a sparkling wit. Her self-deprecating humor easily won over the student audience, who laughed readily at her opening story of passing through Chicago airport customs and security beside other passengers who admired her screw-top traveling bottles but had no idea whom she was.

Born in Czechoslovakia in the 1930s while her father was working as a Czechoslovak diplomat in Belgrade, she moved with her family during World War II to join the government in exile in London to wait out the war. This experience marked Secretary Albright as distinct from her American peers, many of whom had never experienced the violent reach of the war. She spent part of her childhood in a city that was regularly bombed, seeking safety in air raid shelters. She recalled that the situation had been terrible, but there was a sense that when the Americans entered the war, things got better. This was not the last time that American action seemed to precipitate an improvement in world affairs that had a direct impact on beleaguered foreign nationals. Bearing witness to these events formed part of the context for Secretary Albright’s view of the U.S. role in world affairs in her later policy career.

The former secretary spoke about her graduation from Wellesley in 1959, her original ambitions to become a journalist. She moved with her husband, also a journalist, to Chicago, a city with four newspapers, only to be told she couldn’t work at the same paper as her husband and probably shouldn’t work at his competitors’ papers, either.

In recounting her path to politics, she touched on those earlier years when she spent time working for the Encyclopedia Britannica and when she lived in Long Island with two small children to care for and began learning Russian. With another series of moves, she began graduate school at SAIS and later transferred to Columbia University, where she worked on her PhD dissertation examining the role of the Czechoslovak press in 1968 during the Prague Spring. She remarked that it was a lonely time, and so she became involved with her children’s school, chiefly through fundraising. This put her in touch with other parents, some of them politically connected, and began her career in politics. Eventually, she was to serve from 1993 to 1997 as the U.S. representative to the United Nations, and in 1997 became the first woman to become U.S. Secretary of State, the highest post a woman had held in the U.S. government.

One of the books she has written, Read My Pins: Stories from a Diplomat’s Jewel Box, details her use of jewelry as a signal flag for negotiation progress. She became known for wearing pins suited to different occasions: balloons and butterflies if things were going well, turtles if negotiations were slow, and a serpent for Saddam Hussein, since the newspapers of Baghdad had once printed a poem which called her “an unparalleled serpent.” On this occasion, she wore a golden knot pin, which she mentioned was a gift from Igor Ivanov, the former foreign minister of Russia who was her counterpart. It was a knot of friendship, and she noted she had worn it on the occasion of seeing him later that day.

The former secretary spoke with a refreshing candor that energized students. One passing along afterward noted that it was easy to tell who had been at her talk: those students sitting around afterward were all “glowing.”

When she gave her opinions on foreign leaders and recounted meetings with officials and significant events, it was from the perspective of someone at the heart of things. She spoke about her friendship with Russian foreign ministers, her meeting with Kim Jong Il, and the hard task she faced in telling Li Zhaoxing, the Chinese ambassador to the United States in 1999, about the mistaken NATO bombing of the Chinese embassy in Belgrade, an incident that led to a low point in U.S.-China relations.

She switched effortlessly between personal questions about her life and career and policy analysis of world affairs. Her answers incorporated insights about everything from the disconnect between policymakers and academics to her belief that women should be taught to interrupt more to the exhilaration that comes from sitting in the chair behind the placard with the name of your country emblazoned on its front.

When asked about her experiences with finding a work-life balance, her comments went beyond cliché and acknowledged that the reality that everyone feels guilty for not being where they think they ought to be at any given moment. She also warned that the toughest critics are most often those projecting their own guilt and insecurities.

“As an extremely accomplished woman, Secretary Albright struck a really nice balance of humility and confidence. I appreciated her candor and walked away from the talk feeling inspired,” said five-semester student Mary Davis.

When she was last here, the D.A.D.A. series presented her with her own Harry Potter wand. This time, Professor McLaughlin handed her a glass-topped box: inside were pins from all the Hogwarts houses.