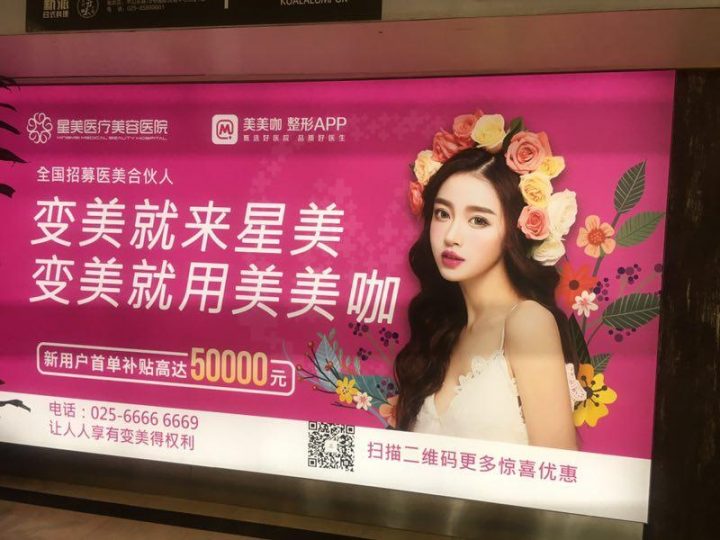 NANJING, China — Although the popularity of Korean pop music and TV dramas seem to have waned in China, advertisements for Korean-style plastic surgery clinics continue to pop up in subway stations throughout Nanjing and other Chinese cities. This phenomenon raises the question of whether the tides of the “Korean wave” that once took the country by storm are rising or falling.

The term “Korean wave,” or “Hanliu” in Chinese, is well known to the Chinese public, which was exposed to the explosive popularity of South Korean culture following the establishment of diplomatic relations between the two countries in 1992. Since then, the warming of Sino-Korean relations has further popularized various aspects of Korean pop culture, including K-dramas, K-pop, K-fashion, Korean variety shows and even Korean standards of beauty. This is due in part to the Chinese public’s ability to relate to Korea’s balanced blend of Western and Confucian cultures, as well as the willingness of both governments to capitalize on this cultural phenomenon to improve relations.

This cultural diffusion ushered in a honeymoon period for Sino-Korean relations in the 2000s, during which it was common to see K-dramas on China Central Television (CCTV) during prime-time slots. Numerous Korean stars swarmed onto Chinese TV programs and self-promotional commercials. At the same time, hordes of young Chinese people flocked to South Korea to get their fill of its culture, consuming Korean makeup, Korean-style clothing and even Korean plastic surgery procedures. According to the Korean Ministry of Culture, Sports and Tourism, of the 17 million tourists who visited South Korea in 2016, about 7 million came from mainland China, marking a 37 percent increase from the previous year.

Chinese officials used to welcome the “Korean wave.” Former Premier Wen Jiabao noted in a 2007 joint interview with South Korean reporters that “the Chinese people, especially the youth, are particularly attracted to [the “Korean wave” phenomenon] and the Chinese government will continue to encourage cultural exchange activities between the two countries.”

However, this honeymoon period came to an abrupt halt in late 2016 when South Korea agreed to install a U.S. Terminal High Altitude Area Defense (THAAD) system designed to shoot down short- to intermediate-range ballistic missiles. This rapidly cooled relations between the two countries, and Korean actors and pop stars were blurred out or completely removed from Chinese TV programs almost overnight. Although there was no official explanation for these abrupt changes, it was no secret that these were Beijing’s retaliatory measures against South Korea. Chinese Foreign Ministry spokesperson Geng Shuang rejected such speculation at a press conference in November 2016, claiming that he had not heard of the so-called “Korean restrictions.”

Regardless of whether or not such “Korean restrictions” exist, the reality is that the Chinese government has shifted its attitude towards the “Korean wave” and is aiming to reduce the influence of Korean culture. The Chinese public has followed suit, supporting a boycott. In 2016, the hashtag slogan “no stars put before national interest” (“guojia liyi qian wu ouxiang”) started trending on Chinese social media.

Is the THAAD incident truly the origin of this newfound anti-Korean sentiment? While it has certainly played a role, it may have only been a trigger for the Chinese government to take action against Korea’s soft power influence. Behind the scenes, Chinese officials are concerned with what they perceive to be the gradual loss of Chinese cultural identity. Rather than rely on Korea, they have ambitions to establish China’s own pop culture.

Chinese people, especially those who take pride in China’s rich cultural history, share government officials’ concerns. When Chinese consumers start blindly purchasing Korean goods, they become the subjects of South Korean cultural promotion, whether consciously or not. This is a tragedy for many Chinese who are proud descendants of Confucian culture. The impact on the local cultural industry is one issue, but a more pressing concern is the thought control of China’s youth. Chinese adolescents’ attraction to Korean culture has made some Chinese question their sense of cultural identity. With hundreds of millions of Chinese youth obsessing over Korean celebrities, delicacies and fashion trends, how could their values and outlooks not be influenced?

Faced with such concerns, the Chinese government would have had to take action against South Korean cultural imports sooner or later, with or without the THADD incident. For Beijing, the question at hand is how to shift the obsession with Korean culture to favor its own. It has not been a big challenge so far, as emulating Korean TV shows and buying copyrights to create Chinese spinoffs has proven effective. China is now mimicking the Korean “celebrity-creating factory” to churn out its own pop stars, although they inevitably take on Korean characteristics from their makeup to their clothing. This strategy seems to be successful in restricting Korean cultural influence in China while satisfying the Chinese youth’s desire for entertainment. However, it is a shame that creativity and innovation have been sacrificed in an attempt to establish China’s own cultural industry. The strategies indeed have been successful in cooling down the Chinese youth’s fixation on Korean-style pop, but few Chinese would admit that China’s own pop culture has been deeply influenced by its small neighbouring country.

Li Jiyun is an HNC M.A.’20 student concentrating in comparative and international law.

Previous post The Past Shapes the Future: The Weimar Constitution in context

Next post Zelenskiy’s presidency will be rife with challenges
sgrosve2